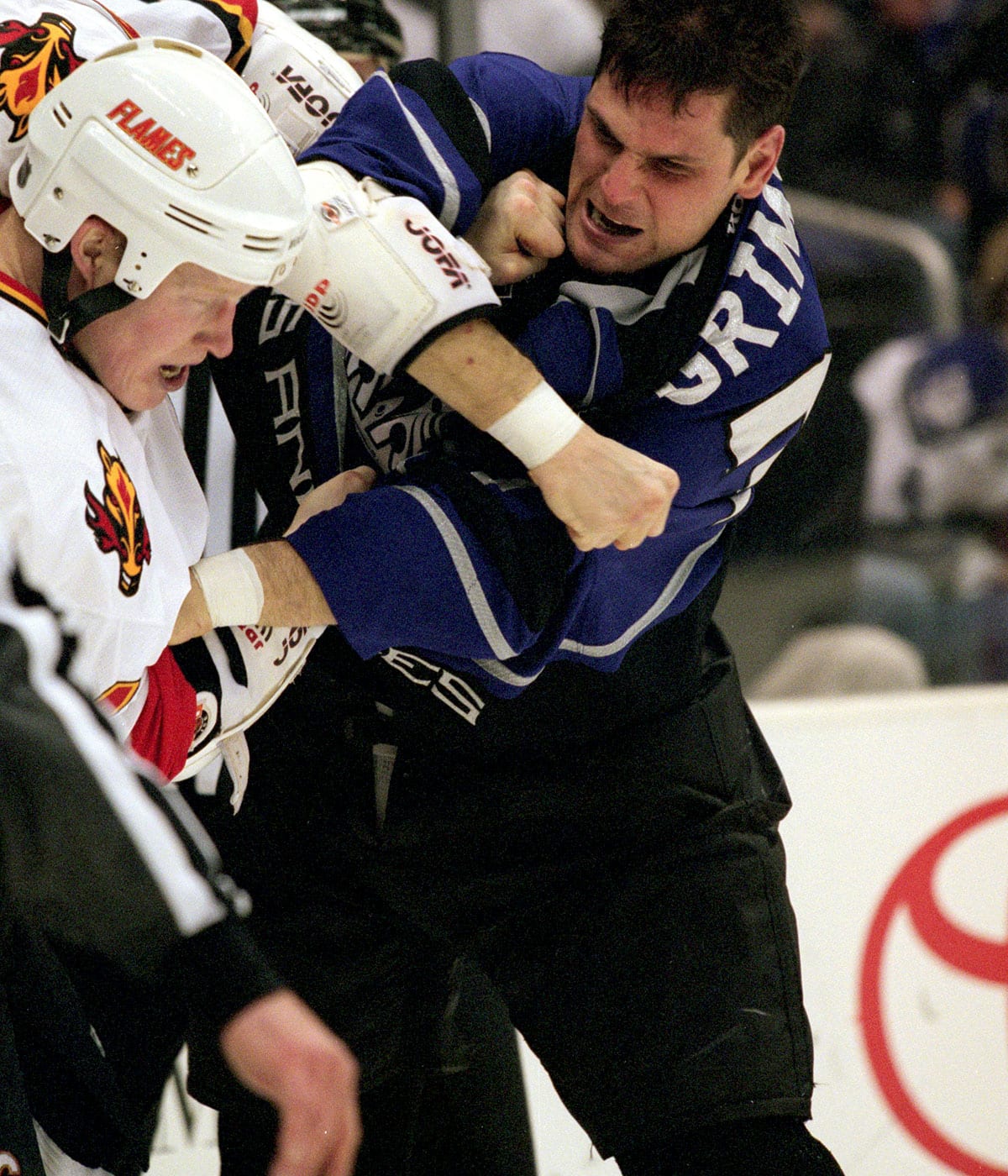 The Grim Reaper meets his nemesis

'What I mistook for the icy calm of an assassin... was just the look of a guy tamping down his own emotions the same as me'

The following excerpt is from Stu Grimson's recently published 'The Grim Reaper: The Life and Career of a Reluctant Warrior'

Early in my career, I was out for dinner with Pam in Chicago.

Boogie’s diner was in the Gold Coast district of the city. I was playing for the Blackhawks at the time, and we were in the middle of a playoff series against the Red Wings. It was an off day for us, so Pam and I were enjoying a moment of solitude between games. That is until I heard this voice booming from across the restaurant:

It came again when I didn’t find the source of the voice at first. By now, everyone in the restaurant was looking at the big man walking toward me, and many of them undoubtedly recognized him as Bob Probert.

As I turned to greet him, I really didn’t know what I was supposed to do. We had fought four times during the regular season. At that point in my career, I wasn’t yet clear on what kind of relationships NHL tough guys had with each other off the ice. I wondered if I was going to have to fight Probert in the restaurant in front of my wife.

He seemed more friendly than menacing as he strolled toward me. But would it be wise to let down my guard with Bob Probert bearing down on me? Should I stand back and get ready to throw or should I shake the man’s hand? That’s what was running through my mind before Bob reached me and held out his hand.

For a good 10 minutes, Bob and I chatted like a couple of buddies from high school or former neighbours who hadn’t seen one another in a while. It was clear to me that Probert didn’t care that we might be trading punches the following night.

He could not have been friendlier. We were just a couple of guys standing there with our fists jammed in our jeans trying to figure out why my Blackhawks were up in the series (3–0) when his Red Wings had got the better of us during the regular season that year (5–1–2; they nearly ran the table on us in 1991–92).

Bob had kind of a sheepish look on his face, which I am tempted to interpret, as I look back, as an acknowledgement that even though we had never spoken before, we knew each other in a way that the people we cared about never would.

That meeting helped me realize that most NHL tough guys probably see their role the same way I did. It’s our job, but it doesn’t define who we are as people. Probert was an intimidating, monstrous force on the ice. But he was a pretty engaging guy off of it.

I didn’t hate Probert, and I don’t believe he hated me. When things boiled over on the ice for us, it was merely an extension of our roles within the context of the game. We were trying to give our team a competitive advantage by protecting our teammates. We were just doing our jobs.

Bob Probert was one of the most intimidating enforcers in NHL history. (Getty Images)

I didn’t fully understand this the first time we chatted, but I did sense that he and I were on different paths. I mention this because our careers ran parallel in so many ways. We were the same age and nearly physical replicas of one another. We were drafted together to Detroit in the same year. We retired the same year. We played for the same teams. We went toe to toe many times, which creates a very unique level of intimacy. At a minimum, we were part of the same brotherhood. But brothers don’t always walk the same path.

Within the game, it was known that Probert was a much scarier fighter when he was drinking and on cocaine than he was when he was sober later in his career. Deep down, Probert was probably more of a nice guy than he was a fighter. He may have been a reluctant warrior like me. Was his substance abuse intertwined with his role as a tough guy? I didn’t know him well enough to know the answer to that but it appeared to be the case.

Excerpted from The Grim Reaper: The Life and Career of a Reluctant Warrior by Stu Grimson. Copyright © 2019 Stu Grimson . Published by Viking Canada, a division of Penguin Random House Canada Limited. Reproduced by arrangement with the Publisher. All rights reserved.

Playing the tough guy role comes with considerable pressure and anxiety. These are things you learn over time. One day you’re a green rookie, just trying to prove you belong. At some point you realize you’ve made it. Later still, you’re the guy the rookies are measuring themselves against. No one comes along and tells you when you move from one category to the next.

I did slowly come to see that I had been wrong about a lot of the true heavyweights I’d fought early on. My biggest mistake was the assumption that they had their fear under control, and that they could see right through mine. I thought that when I looked at a big, tough guy, that was all there was to him. I suppose that’s an easy mistake to make, because that was all that mattered to me at the time. I assumed they were all meaner than shithouse rats, just judging by the looks of them. And that’s probably what I looked like to them.

It takes us all a while to realize that the guy you’re about to tangle with probably slept restlessly the night before the game same as you. What I mistook for the icy calm of an assassin, in many cases, was just the look of a guy tamping down his own emotions the same way I was.

There is no escaping it: the job we do takes a heavy toll. That’s not to blame anyone, or excuse anyone. It’s just a simple statement of fact. The saddening statistics tell us that it can be hard to keep going, night after night. Whether you take up that burden willingly or have it jammed into your hands. Whether you handle it wisely or in ways that come back to haunt you and those who love you, it can be a heavy burden.

And some guys leaned on solutions that kept them going for one more game, or one more sleepless night, but it caught up with them in the long run.