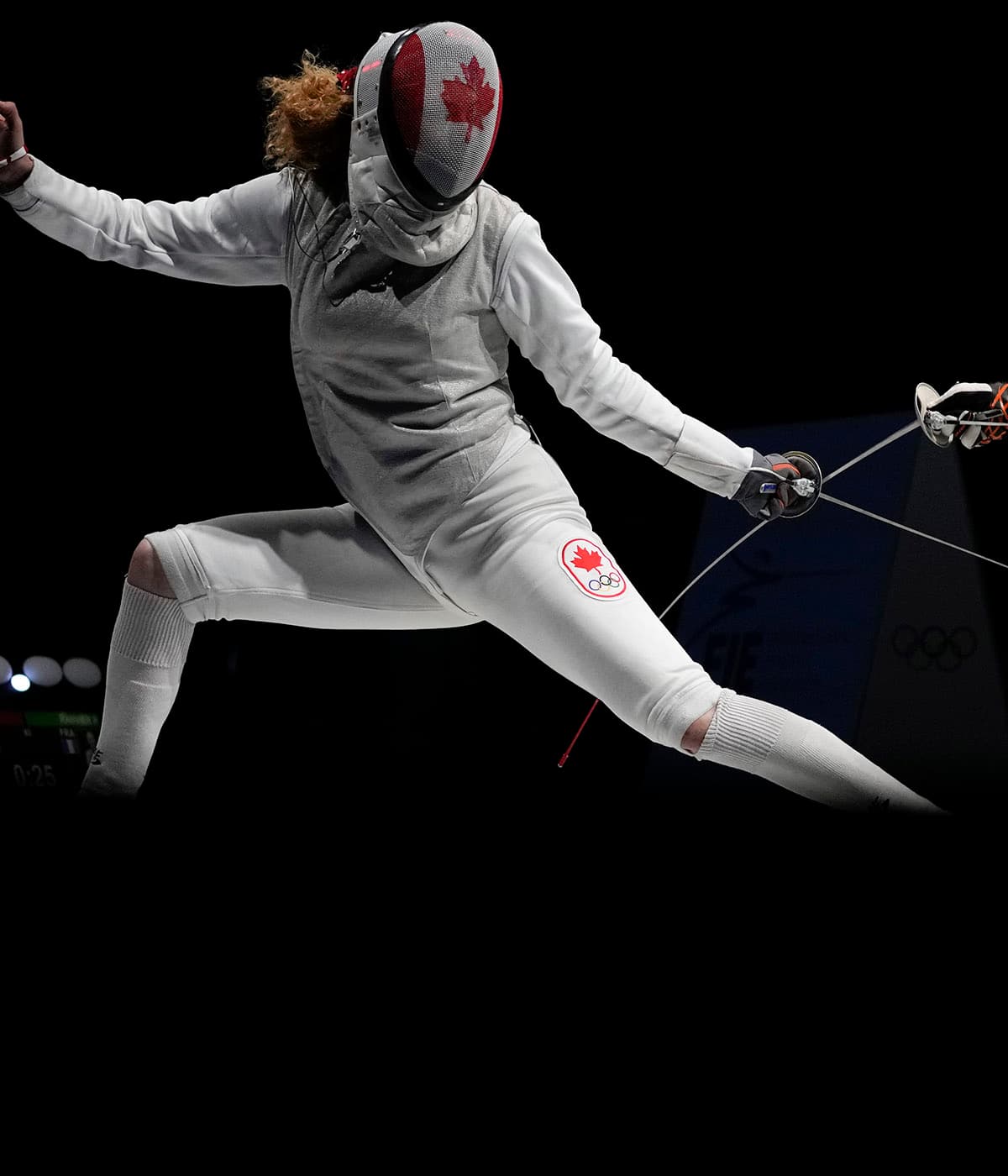 Blink and you’ll miss it: The fine art of fencing

Fencing is a form of self-expression for Canada's Eleanor Harvey

You have to go forward now.

My coach and my inner voice are telling me what I need to do. But everything inside me is fighting back, trying to convince me I’m too tired and weak.

I’m winning 14-13. The first fencer to score 15 hits will advance to the final. It’s the 2022 Korea Grand Prix, and I am up against world-ranked No. 2 Alice Volpi from Italy. I have fenced Volpi twice in the last year, losing both times. I know I need a different approach for this encounter. I started the bout with an early lead, coming out more aggressively than my usual defense-oriented opening style. This took Volpi off guard initially, but the surprise factor only works briefly against an experienced fencer. Volpi has an arsenal of skills to combat almost any tactic.

Eleanor Harvey celebrates after a win at the Rio Olympics in 2016. (Fabrine Coffine/Getty Images)

She settled in and scored several hits, bringing the score up to a tight 9-8 lead for me after the first period. But at 13-10 the energy changed. Volpi came running at me like an eagle dive-bombing her prey. I knew I had to assert myself to stop her from advancing so confidently. At 14-13 I gained the initiative and attacked, but she defended well and started sprinting at me again.

I retreat back to the end of the strip and counter-attack, scoring the winning hit. I’d won going backwards because I was strong enough to go forward first, even when she was doing everything she could to not let me attack.

When skill levels are equal between fencers, my coach always says the bout becomes a battle of wills. The winner is the one who asserts themself in a way that prevents the opponent from doing what they want. It is about forcing discomfort, making them rush or hesitate at times when you are the one who is ready to strike. I've craved intense moments like this my entire life.

Both my parents are athletes. My grandpa ran track for Michigan State University on an athletic scholarship. Three days after I was born, my mom strapped me into the stroller for a run. She did this until I was eight years old, when she ran a hilly 33km road race with me in the very same stroller.

My dad grew up playing hockey, and as a young adult transitioned to running. Together, my parents competed in several Ironman Triathlons. They broke up when I was a baby, but both continued rigorous exercise regimens; I grew up idolizing athletic prowess. It complemented my innate competitive spirit.

Neither my mom or dad’s houses had cable TV, and the only time we got it was during the Olympics. Watching the 2000 Sydney Games, I decided that I would be an Olympian one day. I didn’t know what sport, but I knew I would find my way there. I began running with my parents and envisioned myself as a long distance Olympic runner. I had early success in city-wide track meets, but at age eight I started karate lessons, which is where I discovered the thrill of one-on-one combat. I was by far the most serious kid in my YMCA karate class. My Olympic vision switched to karate, and I trained for two years until I discovered that there was no Olympic karate event at the time.

I needed to find a different sport, so a family friend suggested fencing after hearing a radio interview with legendary Canadian fencer Sherraine Schalm. I had never heard of fencing, but when I learned it was sword fighting, I knew I’d found my path to the Olympics. Transitioning from karate was a natural shift, as they had very similar footwork and tactics, and sparked the same competitive fire.

Harvey, left, and Pauline Ranvier of France compete in the Foil team quarter-final at the 2020 Olympic Games in July of 2021, in Chiba, Japan. (Andrew Medichini/The Associated Press)

Fencing is my form of self expression.

On the strip, I enjoy frustrating and exhausting my opponents. I use the beginning of the bout to measure my opponent's attack. I have worked to develop the confidence that allows me to totally focus on making my opponent’s attack fall short using only my footwork. I can do that against any fencer. This allows me to measure the length of their attack, the type of footwork acceleration they are using, and the path their blade is making towards the target.

I tune in to their target choice. Can I use my elbow to block their tip and score? I notice if their tip moves forward early or late. Can I hit and jump backwards, or should I hit and step in, evading the attack with my body? I check if their blade is somewhere I can reach as they move forward; can I hit their blade and attack them as they are preparing their attack?

I score a majority of my points closer to the end of the bout, when the other fencer becomes more rash with their decisions and inefficient with their movements.

My creativity comes in the way I score after getting a feel for the other fencer’s moves. The bigger the variety of movement sequences I have repeated in practice, the bigger range of tools I can use to solve the problem my opponent is presenting.

My bout against Volpi in Korea was a moment in which I felt the most present and stimulated. I live for the feeling of coming up against self-doubt, but instead of faltering, believing that I can continue to fight, solve, and create. It doesn’t always result in victory, but as I work toward my third Olympic Games, I know I have developed from being a child with a dream to an athlete expressing myself.  I am developing my skills, doing what I love most.

If you are an athlete or coach and interested in writing for Player’s Own Voice, we accept submissions from anyone who wants to share a moment that mattered in their sporting life, issues affecting the sports community or who have a compelling sports story to share. No need to be a professional writer! Contact us at  players-own-voice@cbc.ca