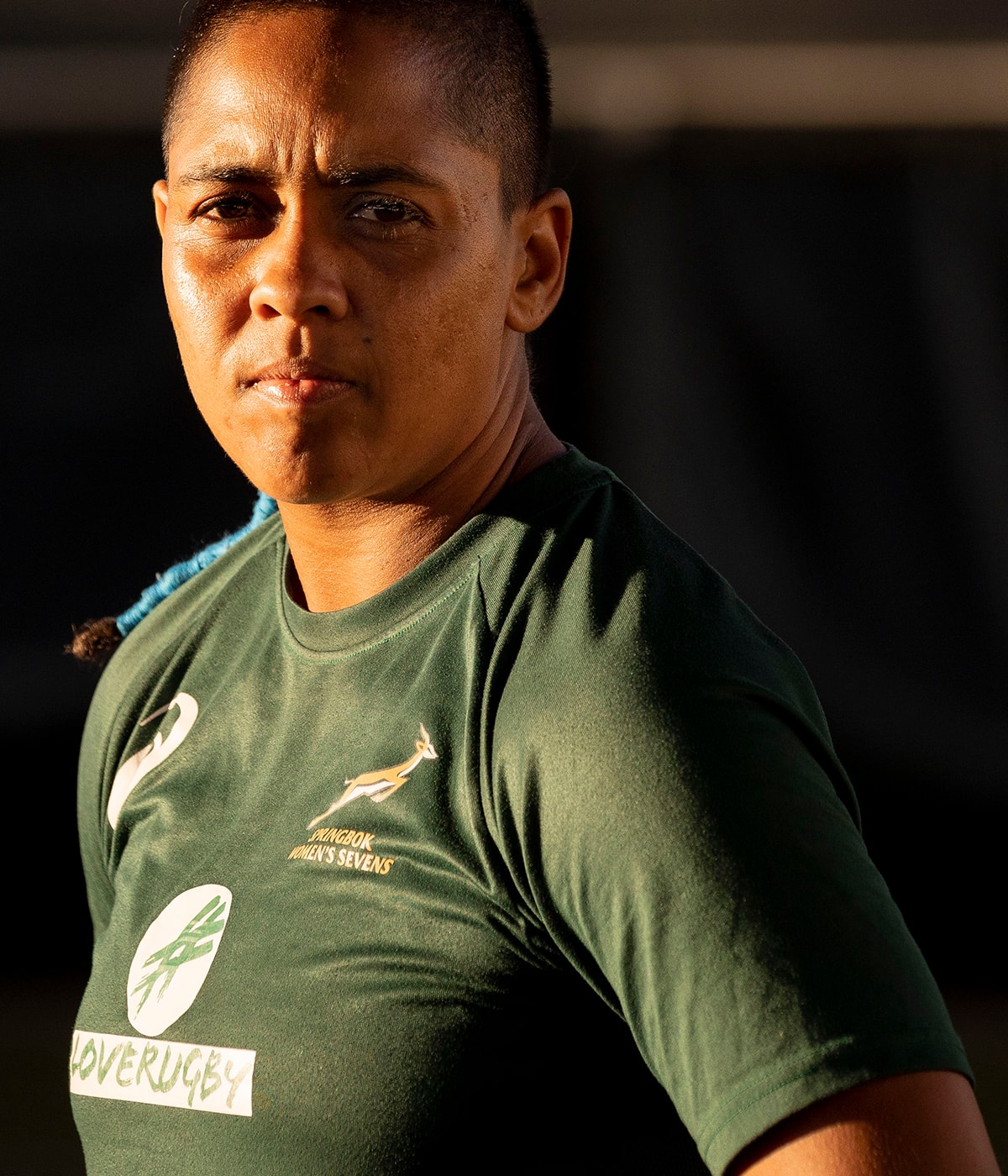 That phone call didn’t just change my life, but also the future of women’s sport in South Africa.

Eastern Cape, where I grew up, is one of South Africa’s poorest areas. Coincidentally, it is also home to Springbok captain and World Cup winner, Siya Kolisi. Every day brought new challenges for me and my family, but all I ever wanted to do was play rugby. I dreamt of wearing the famous green and gold jersey.

Chances to play rugby were few and far between for females in South Africa in the 1990s. There were no rugby teams for girls or women. My mum, a provincial table-tennis player in her youth, was wary of the sport, because it is so hard-hitting. But my dad was a keen rugby fan, and he played for Eastern Province. He regularly woke me up in the middle of the night to watch big international matches on TV with him. He’s really the one who ignited my interest in the game.

I still wanted to play though, and with my mum not wanting me to get hurt, and no women’s team to join, I would sneak out of the window of my parents’ house to play rugby with the boys out on the street, often with an old worn-out tennis ball.

I was the only girl playing rugby at school. It wasn’t until I joined a local club in 2005 that I was able to start training with other girls. Middleburg Stormers had just the one rugby ball, but we made do with what we had. We didn’t have a choice. Over the next three years, we trained pretty irregularly, but my love for the game made me determined to see where it could take me. I got my first hint of that in 2008, when the coach of South Africa’s national sevens team asked me to train with the team. At 17 years old, it was a proud moment, and I went in with the naive expectation that the facilities would be world class.

The women’s team was lacking resources and structure, and after a few years of competing, I felt it was time to pursue a more sustainable career elsewhere. I began training as a fire fighter with Middleburg Fire and Rescue Services. In 2014, just as I was beginning to come to terms with life beyond rugby, the South African Rugby Union (SA Rugby) came calling. They were determined to boost the women’s game. I was among the first to be offered a full-time professional contract.

I remember the phone call vividly. Feelings of pride come flooding back every time I think about it. But I was faced with a dilemma: I had spent years playing the sport I love, with little reward to show for it, and now that I was enjoying a new career, the offer comes to play rugby professionally. With the help and support of my incredible parents, I decided to follow my passion for rugby. To this day I am so pleased and grateful that I accepted the contract. That phone call didn’t just change my life, but also the future of women’s sport in South Africa.

The last five years have seen a huge push for greater development in women’s rugby, in South Africa and around the world. South Africa’s women’s team now trains with the men’s sevens. The shared facilities have helped us develop into a team that is pushing to compete on the biggest stage, the HSBC World Rugby Sevens Series. HSBC has led the way for greater gender equality in rugby sevens, which now have eight women’s tournaments, most of them paired with the men’s series. It’s an exciting time for women’s rugby in sevens.

Looking back at my 13 years of playing rugby, I have to pinch myself. I have played in three Rugby World Cup Sevens tournaments, and if I’m selected, next year’s Rugby World Cup will be my third representing the 15s side.

It’s encouraging to see so many girls getting involved from a young age. There are grassroots programmes around the world now. In 2019, over 91,000 young Canadians took part in HSBC Rookie Rugby programs, 51% of them young female athletes. There is more to do, but the sport is on the right path.