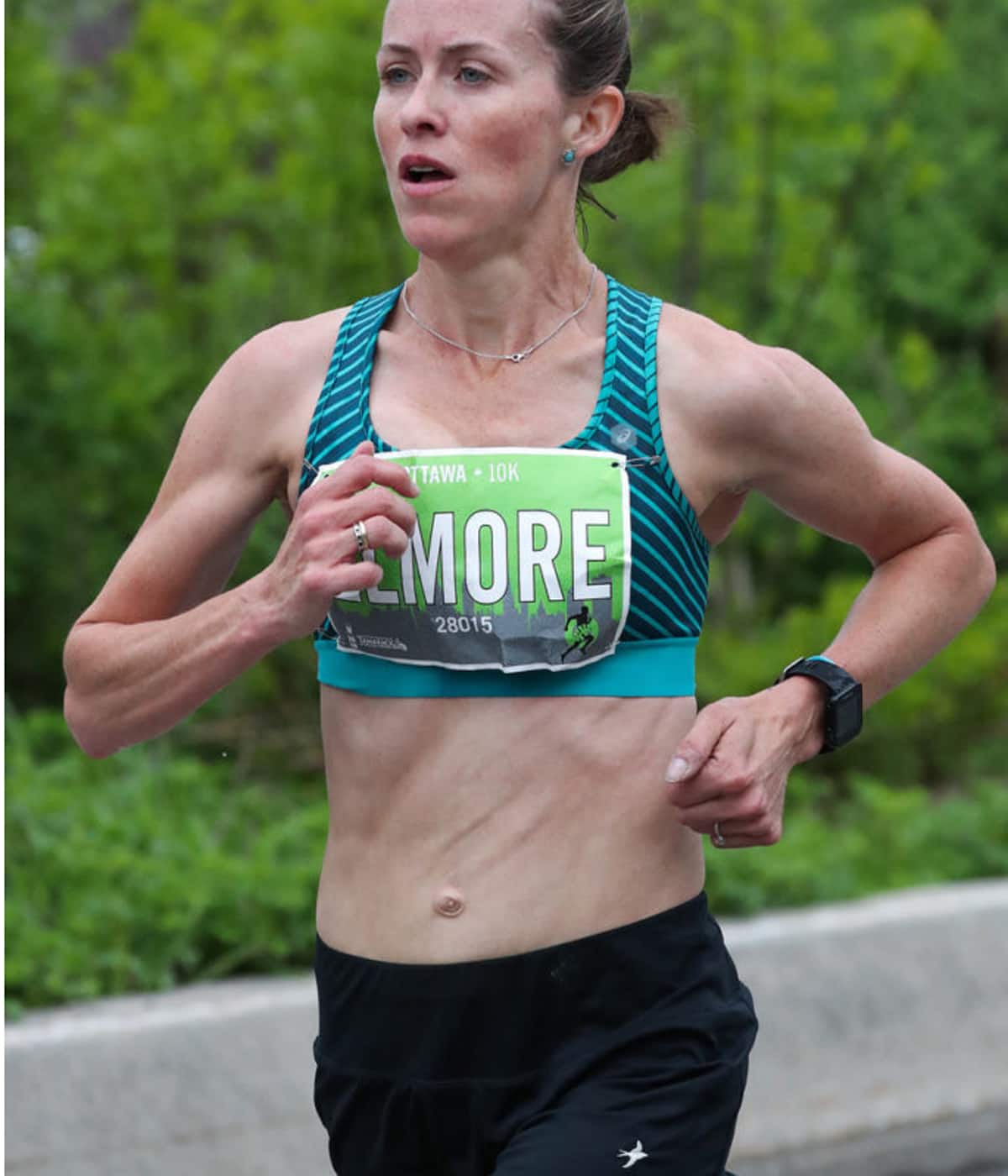 'I am 40 years old, the mom to two beautiful boys, and now the Canadian marathon record holder'

This January, 40-year-old, not-quite retired racer and mother of two, Malindi Alberta Elmore ran the second marathon of her career, and obliterated the national record.

CBC Sports asked Elmore to write about how that incredible run came to pass. Her story begins well  before Covid-19 isolation measures swept the world:


I stood on the start line of the 2012 Olympic Trials, and all I could think of was how I didn’t want to be there anymore. The usual nerves, excitement and emotions that consumed my body and mind prior to races was notably absent, and what I felt instead was just deep fatigue and a conspicuous indifference. I was not sure how I was even going to summon the energy to run around the track 3.75 times – let along find my usual racer’s instinct to make and respond to moves.

I had decided in the days leading into this Calgary race that it was to be my last track race. I had been racing seriously as a high school, university and professional runner for the past twenty years, and I needed to step away from the sport that had defined my life up to that point. I was crushed that with all the effort, time, money, and heart that I had put into the sport over the eight years since my last Olympics, I would not be able to redeem my performance from Athens.

Malindi Elmore checks her time in the 1,500-metre heat in Athens in 2004, (Canadian Press)

I had struggled through injuries, doping scandals, sport politics, loss of carding and loss of sponsorship; each setback felt like another massive defeat. I had prioritized my running over friends’ weddings, baby showers and family trips. I was low – about as low as I had ever been in my life. I think I wanted it too badly – and the feeling of loss was real. I no longer knew how to be myself. I thought I had done everything right, and yet here I was, at the Olympic trials without the World Athletics Olympic standard I needed to qualify for the London Olympic Games. I felt a lump rise in my throat and blinked the tears away. I was not sure which version of me would show up in the next four minutes. I just wished it was over.

“Runners take your marks”, shouted the starter as he adjusted his ear protection and raised his starter’s pistol. My mind flashed back a few days to when I told my husband I was thinking of withdrawing from the Olympic trials. Not one to mince words, he shared a quote I had not yet heard “Sport may build character; but sport also reveals character”. That was what I needed to hear: my sport was more about being the person I wanted to be and not quitting when faced with adversity. It also meant respecting my competitors – knowing that if I suddenly pulled out of the race that I was not honouring the work they had also put in over the years.

BANG. The gun fired and the top sixteen Canadian women shot off the line and immediately moved towards the inside lane. Just before the bend in the track our pace slowed dramatically, all of us jockeying for position and no one volunteering to lead the pack. Carmen Douma-Hussar, a decorated and highly respected athlete, making a comeback from retirement, reluctantly took the lead. We all filed in behind her, like obedient little ducks following their leader. I let my mind go blank, and my body went into auto-pilot. How many times had I raced 1500m? A thousand races maybe? A game of fitness, speed and tactics; for me the distance was the ultimate test of a runner. A game that I sometimes felt like I understood and was on the verge of mastering, and sometimes felt was an enigma with no answer.

As we looped around the track to the cheers of fans, energy slowly faded back into my heart. In my depressed state, I had forgotten about the peace that racing brought me. I had forgotten how it made me feel alive, powerful, confident and capable. We passed the 1100m mark and the bell rang; our strides instinctively responding. A tactical sprint finish was in the cards today, and I knew my best hand was to continue to stay patient as we rolled down the backstretch. Four athletes now separated the field – Carmen still leading, followed by Nicole Sifuentes, Hilary Stellingwerff and myself. The four of us had been the top Canadian 1500m runners for the past several years, and although there were three possible Olympic spots on the line, only Nicole and Hilary had the Olympic standards, so really it only mattered for them to be in the top three, since neither Carmen nor I would be selectable by Athletics Canada.

Elmore waves to supporters after winning the 1,500 at the Canadian track and field championships in Victoria, B.C. in 2004 (Andy Clark/Reuters)

Around the final corner, into the homestretch we charged: now all four of us spread out across the lanes in a straight line. With 80m to the finish line, I knew it was my turn – my final chance to say good-bye to the sport that had opened up so many doors to me and had been such a powerful force in my life. I dug down deep, willing my arms and legs to go a little bit faster to put the edge on my competitors. A few steps from the line, I knew I would win, and I punched the air with victory. It was a victory for me, not for winning the race, but for doing something that took all my energy and emotional strength to do. Even if I would be saying good-bye to my beloved sport and my Olympic dreams, I knew I would be okay, that I could be forever proud of my efforts that day.

I stepped off the track into the welcoming arms of my family. We shed some tears and embraced. I felt a huge sense of relief and was ready to get on with life outside sport.

I took seven years off competitive running while I pursued other passions, including triathlon, coaching and parenting. Gradually, I felt the pull back to the sport that I loved. My return to competitive running came with no strings attached – I was running again because I love the freedom it gives me and I love the feeling of moving my body. I decided haphazardly to try a marathon as a bucket-list item. I absolutely loved the training and I had an amazing experience in my first marathon, January 2019. My second child was seven months old and my expectations were modest. I exceeded my expectations and realized that with very limited training (and sleep!) leading into my first marathon, I had so much potential to improve. I was not sure at that point where the sport would take me, but I did not care. I was doing it for myself again, and for my love of running. I was fresh again and felt renewal through running.

Exactly one year after that first marathon, at my second race of 42.2k, I broke the Canadian women's record by just over two minutes. I ran 2:24:50.

In the eight years since my last race on the track, when I finished burnt out and ready to move on with my life, my return as a marathoner gave me fresh perspective on life and sport. I realize, in hindsight, I had fallen into a trap of seeing setbacks as defeats, and not as opportunities. Nazi camp survivor Viktor Frankl said “Forces beyond your control can take away everything you possess except one thing, your freedom to choose how you will respond to the situation. You cannot control what happens to you in life, but you can always control what you will feel and do about what happens to you.” I had allowed setbacks to rob me of my love of running and competing. But now I return to the sport, fresh and joyful.

I want to see how fast I can run and I will keep things on my own terms. I care less about the outcomes now, and more about self-actualization, being a role model for my children and the athletes I coach. I am connecting with a greater community.

I have learned that you do not need a master plan and a tightly scripted set of goals. I followed my heart twice, first to walk away from the sport, and now to come back with an open acceptance of whatever comes next. The fact that I am 40 years old, the mom to two beautiful boys, and now the Canadian marathon record holder, hopefully on my way to a second Olympic Games? Still boggles my mind. I am grateful for the setbacks and defeats. They make the hard- earned successes so much sweeter.