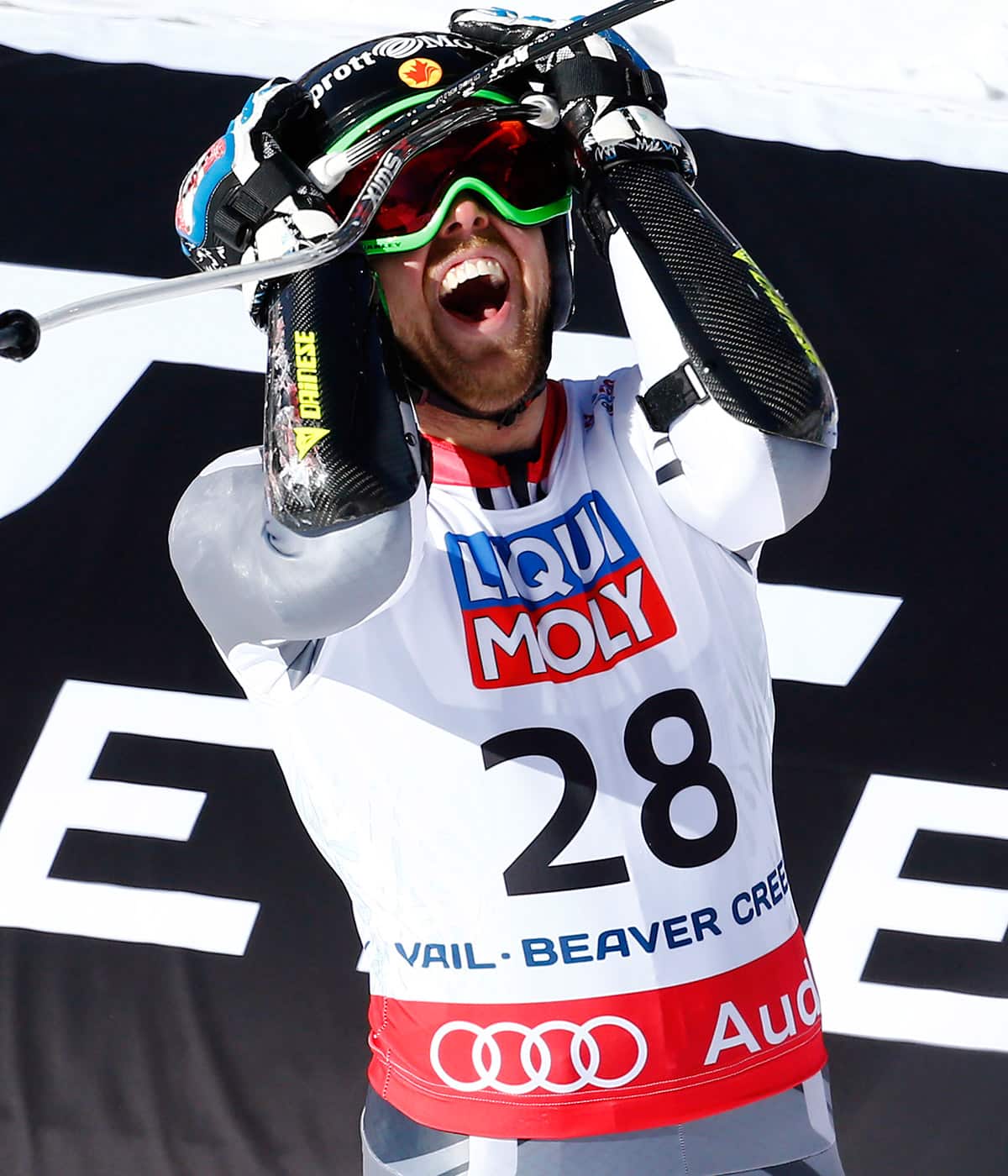 Dustin Cook tore the MCL, ACL in his right knee, plus one of his adductors. (Photo courtesy Dustin Cook)

One second I’m skiing and the next I’m lying on the side of the hill in pain, wondering what happened.

The crash was a good one with limbs everywhere, somersaults, plowing through gates, the whole shebang. None of that injured me though.

It was the initial and very innocent fall onto my hip that did me in. We generally try to train on ice, not because it’s the fastest surface, but because it provides the fairest surface for everyone involved. Ice doesn’t break down or get rutted out as quickly or as badly as soft natural snow does, and in a sport that’s already extremely unfair, an icy surface can help make the playing field at least slightly more level.

The day I crashed we were training on a figurative hockey rink, which is very extreme and not normal. As I slipped onto my hip, my foot went down to try to get out of the way of a gate and my edges caught and torqued my knee around, tearing both my MCL, ACL, and one of my adductors.

I can count the number of times I’ve been in a hospital for an injury on one hand and that’s without using all the fingers. It’s not somewhere you want to find yourself as an elite athlete and somewhere I’ve tried to avoid like the plague.

So when I found myself strapped into an MRI bed to determine the severity of the injury I had suffered, I was uncomfortable for more than a few reasons.

Until a few weeks ago I had never had surgery before. I’d never even broken a bone. I’ve had a few sprains here and there, some chronic back issues that we finally resolved, but nothing traumatic. I’d honestly never even thought about surgery. Why would I?

But I can name 50 people I know personally that have had surgery for this very thing. No big deal.

The nerves definitely kicked in a bit as we got closer to go time, and being in a hospital in general didn’t help, but luckily they gave me some happy juice before surgery and all the nerves melted away.

Two seasons ago, I notched a couple of early results in the points and then went on a dry spell of almost two years where my best finish was 39th.

At times it was frustrating and humiliating.

Everything changed last season. After a good summer and an amazing training block leading up to Lake Louise, I broke through with a 13th-place finish in the super-G. My finish-line celebration says it all but I was beyond pumped! To top it off I had won the toughest section of the race, and was in seventh place until the final split. It was a confidence booster to say the least.

With results come expectations, so the nerves spiked a bit too, but the confidence gained from that one race was enough to push everything else aside and just go for it. I followed up the Lake Louise performance with a pair of 12th-place finishes at the next two races before Christmas.

After leading the first portion of the Kitzbuhel super-G by a large margin, I made a huge mistake but still finished 19th. I vowed to myself “there is no way you’re leaving this season without a podium!”

Beaver Creek, Colo., is my favourite stop on the circuit, and the world championships were held there last season.

It was there that everything came together. Shocking many, I claimed my first-ever podium in front of family and friends, in my adopted home… something I will always cherish. Not to mention a career best 12th-place in my second discipline — the giant slalom.

The world championship silver will forever be my favourite accomplishment. Too many things went together to make that day special for it to ever be surpassed. Everything after the race that day was a total whirlwind, especially since it was my first-ever podium, and I had no idea what to do or how to act!

But I remember standing on the podium watching the flags rise, hearing the Austrian national anthem and thinking that the very clear goal going forward was to hear the Canadian anthem play and watch our flag rise to the top.

When I accomplished that goal about a month later, it was totally surreal. It really is a powerful thing to represent our country on the world stage. So many people had a hand in getting me to that moment and it made me so incredibly proud to be up there singing O Canada for all of them.

Be yourself, don’t overthink it

I finished the season on the podium in two of the final three races, putting the cap on a dream season by winning the last race of the year and ending up fifth in the standings.

What changed? The answer is not much.

I truly believe it was a culmination of a lot of years of hard work, struggle, success and some failure too. I’ve been a slow starter all the way up the chain and I think this was just the way it worked out. Would I have liked it to happen faster? You’re darn right! But I’m still pretty happy with how things are going.

I’ve always tried to be modest, the last thing I want to do is brag about what I’ve accomplished. After the first podium I couldn’t stop myself from wondering if I was doing things I would have done before the success. I didn’t want to be perceived as having changed. That lasted for a few days until I made myself relax.

“Dude, be yourself and you’ll be fine, don’t overthink it!”

For Cook, Spending 4-5 hours doing simple leg movements and bare minimum strength exercises isn’t his idea of a good time, but it’s got to be done. (Photo courtesy Dustin Cook)

Recovery is boring but…

ACL injuries have a general timeline of six months before you can return to skiing. Unfortunately six months takes me out for the entire season, but on the positive side it means there’s no reason to rush anything, so I can let it heal fully and properly without missing anything else.

For now things are pretty boring and limited which is tough for someone who’s accustomed to being outside 4-5 hours a day working my butt off. Spending 4-5 hours doing simple leg movements and bare minimum strength exercises isn’t my idea of a good time, but it’s got to be done.

The next big benchmark for me is getting a full pedal stroke on the bike. It doesn’t seem like much but with the range I can get right now it seems like it’s going to take a small miracle.

If things are going well at the six-month mark, plans will be made to get me back on snow as soon as possible for an easy return to snow camp.

After 10 straight years of skiing 250-plus days a year, this is definitely going to be a new experience for me.

Seeing friends and family more often is definitely a silver lining, along with home-cooked food and a lot less European meat and potatoes.