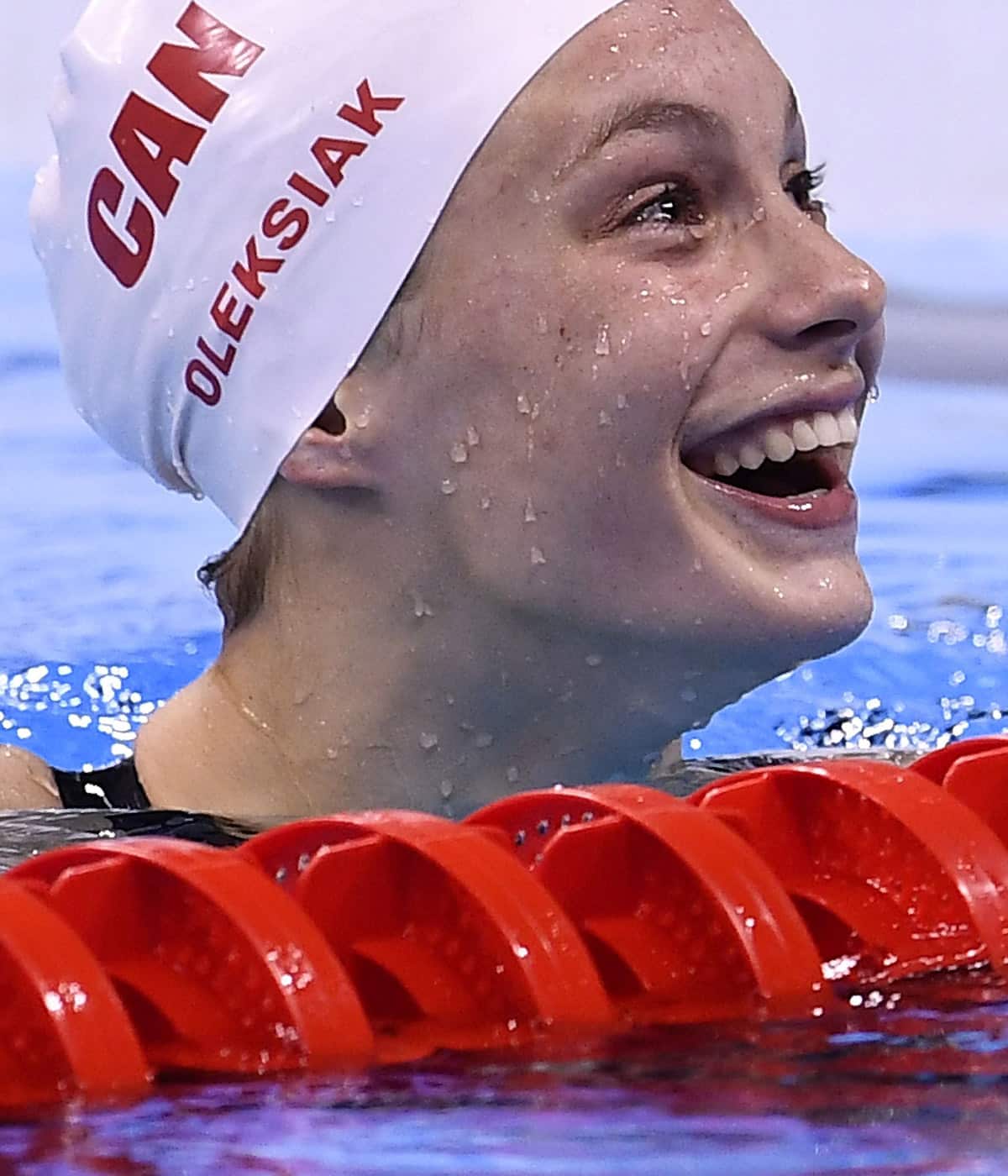 Penny just needs to be Penny

As I watched Penny Oleksiak churn her way into the Canadian sports history books during the 2016 Olympic Games in Rio, I couldn't help finding myself being transported far back in time to a parallel moment in my own life.

It was August of 1966 in Kingston, Jamaica. As a 15-year-old neophyte I was competing for the first time in the British Empire and Commonwealth Games. Just as Penny found herself virtually untested internationally upon arriving in Rio, so did I.

With little or no expectations before leaving Vancouver for the Games, a reporter asked me what I was hoping to return home with. Upon a moment's reflection, I enthusiastically replied, “a tan!”

By the time the 1966 Commonwealth Games ended, I had powered my way to the most medals ever won by a single athlete in the history of those Games. Seven times I climbed that podium. I won four gold and three silver medals, and broke two world records in the process.

Not only was the country and media completely flabbergasted by my amazing performance, but to be quite honest, so was I. Even more life changing for me, however, was the consequences of success. It began the very moment I arrived back on Canadian soil. I had no idea while I was in Jamaica, what waves I had created back in Canada where the country had been following the press reports of my achievements.

The second I touched down at Pearson Airport in Toronto I was hustled off to the VIP lounge to meet the hordes of photographers and reporters who awaited my arrival. I was completely taken aback and overwhelmed by my reception. In my naivety I had no clue what VIP meant, let alone be treated like one!

I was just a shy 15-year-old teenager who loved to swim and never wished to be the centre of attention.  I was happy performing well as an athlete but felt totally like a fish out of water with my new-found fame. All the fuss made me feel quite uncomfortable, but I realized that if I was to pursue my ultimate dream of winning gold in the 1968 Olympic Games in Mexico City, I would have to adjust to it.

My own experience tells me that Penny's mindset both pre and post Rio Games was very similar to my own. She strikes me as a typical teenager who has immense talent but neither seeks nor desires the limelight.

I also have a strong sense that Swimming Canada knew that Penny was capable of performing well at the 2016 Olympics, but perhaps because of my own curse of expectation experience, it wisely decided to keep Penny's training times under the radar. The strategy worked well for her this time.

However, the cat's out of the bag now, so to speak. As much as Penny may not want the attention or distraction of being a public figure, the subtle pressure is always in the back of one's mind. I know from experience that a person can only stave off compounding pressure for so long.

In the summer previous to Mexico City, Canada hosted the Pan Am Games in Winnipeg, celebrating our 100th   anniversary of Confederation. Again I climbed the podium five times, winning two gold and three silver medals, and breaking two world records.

Once more I was able to remain focused, determined to keep my attention on my ultimate goal of Olympic gold the next summer. My life and swimming times were right on track, and I had proven many times that I could succeed on the world stage. The word spread like wildfire — the Olympic gold was Tanner's to lose.

Dangers of stress and hype

I was in no man's land, with no one to help me find a way out. I was a trailblazer with no mentors to talk to. Very few athletes had walked in my shoes in those days.

There were no gold medal hopefuls to assuage my fears, or help shoulder the burden of an entire nation’s expectations.

My belief is that Penny will not be subject to this avalanche of pressure which I experienced.

Both the media and the sports system are much more aware of the dangers of stress and hype and attention on an individual athlete. Penny will be much more supported and protected from such emotional isolation. Most know the fate that was to befall me in the late fall of 1968 in Mexico City.

Who knew then, the price I would eventually pay on a personal level for years to come? My story has been told many a time. I have written about my experience extensively at my websites, elainetanner.ca and questbeyondgold.ca.

The mistakes of my past can hopefully guide Penny to a different future. With the grace of many decades of reflection, I see much more clearly, the precarious path I followed that fateful Olympic year.  My hope is that Penny will avoid the mistakes and emotional rabbit holes I unwittingly fell into.

I can speak with frankness now about my emotional meltdowns both before and after the Olympics.  Back in 1968, no one even knew about sport psychology or stress disorders, much less diagnose or treat them. There is no personal Richter scale for inner trauma. I had to navigate alone, not realizing I was suffering post trauma. My feelings of letting the country down, and failing in the eyes of the public were just too heavy a burden to carry on my fragile inner foundation.

I now understand how the secret and personal Olympic gold-medal dream of an eight-year-old girl became the public property of a nation nine years later. What once was an inner wish suddenly became an assumed national contract, with no margin for error.

I now know that my inner focus and confidence unravelled on my way to the Olympics. The powerful and successful mental imagery that created many personal victories morphed into dark and doubting fears that I might fail to live up to other’s expectations. I had been comfortable pushing myself beyond my own limits because I knew what I was capable of.

I was not familiar with slipping into the water with the weight of an entire nation hanging onto my shoulders. By the time the starting gun went off on my first Olympic final, having qualified first, I had already sunk myself.

Oleksiak should be able to handle the heightened expectations of the Canadian media and fans. (Ryan Remiorz/The Canadian Press0

Everything leading up to my race had gone wrong: errors from poor decisions on behalf of the swimming association; inadequate training facilities; not allowing my long-time coach Howard Firby to be there for me. This will not happen to Penny. I am grateful and pleased that my story has been well documented in Canadian and international sporting history, and that much has been learned from those egregious mistakes. Much has been written and learned about the complex psyche of elite athletes and the consequences of competition. Sports governing bodies, and surrounding families, are much more able to nurture and support high-profile athletes these days.

Penny's success at the Rio Olympics was very similar to my rise to fame, but that is where the obvious parallels end. Unlike me, Penny has a very strong support system which is invaluable to her. Penny’s family and friends are protective, and all are keenly aware of the pitfalls of apparent overnight success.  Penny is aware of expectations and the negative undertow which gravitates from them. In the current sports system, Penny has access to all kinds of therapists, both physical and psychological.

She is well surrounded, but ultimately her future is up to her. We can manage an athlete's outer environment but what goes on inside their head? What emotional reserves are there?

How can one measure courage or heart or determination?  Sometimes, even the athletes themselves don't know until they are truly tested.

From my own perspective, Penny's amazing success in Rio was definitely well earned. At the same time, now that she has been “discovered” in the eyes of the public, each ensuing competition on the world stage means ever increasing pressure.

My sincere wish is that Penny will not lose herself in the hype and expectation that she continues to compete to ultimately please her. That is the sign of a true champion in life, medal or no medal.