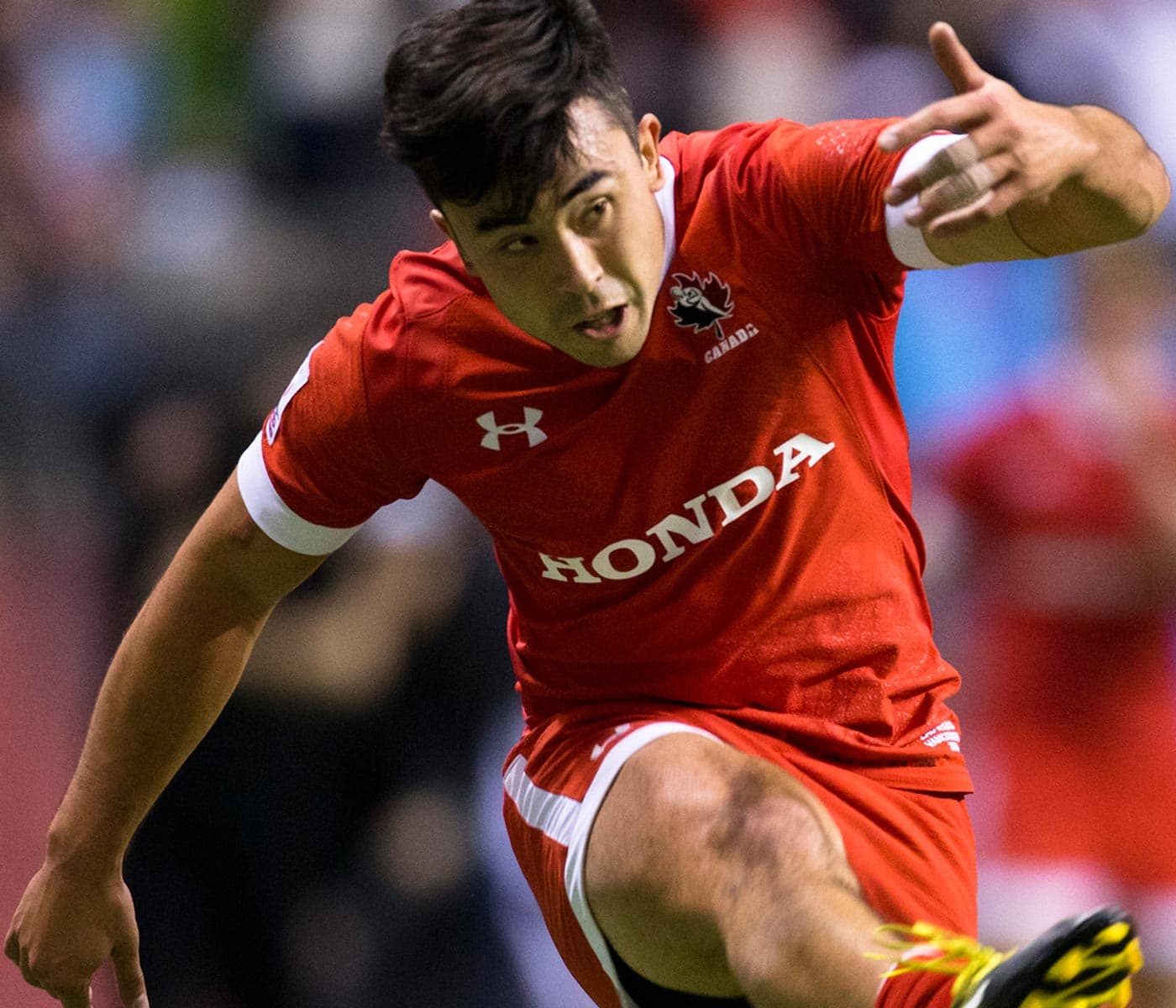 Canada will be relying on Nathan Hirayama's right boot at the upcoming Olympic qualifier in Monaco. (Kevin Light/CBC Sports)

That was the subject of the email I got from Doug Tate late one night during my first semester at UVic in 2006. Doug was my coach, as well as the manager of the national rugby sevens team at the time.

I called my parents immediately, waking them up with the news. To say I was excited would be an understatement. It was a dream come true.

Nearly 10 years into my career on both the sevens and 15s national teams, I’ve been a part of three Rugby World Cups, a Rugby Sevens World Cup, two Commonwealth Games and won two Pan Am gold medals.

I’ve also had three surgeries in the last three years, not to mention countless other injuries in between. I’ve managed to rack up quite a few Air Miles along the way.

Now, with a spot in rugby’s return to the Olympics within reach, I am in the middle of what is definitely the most important stretch of my career.

In addition to quarterbacking the offence, Hirayama plays a key role in the team's defensive efforts. (Kevin Light/CBC Sports)

In 2009, it was announced that rugby sevens would be included in the 2016 Summer Games in Rio de Janeiro.

Although I loved being on the sevens team, my true love was the 15-man game. Just like most kids in Canada at that time, if you played rugby in high school or for a club, you were likely playing the 15-man game.

That Olympic announcement changed the direction of my career, and I know a lot of my sevens teammates would agree.

Just a few months later in 2010, the Winter Olympics came to Vancouver. I remember greasing my way into the Heineken House at the Minoru Oval in Richmond, B.C., with my buddies to watch the various events. I even remember where I was when Sidney Crosby scored the gold-medal winning goal (shout out to The Roxy).

After that experience, the decision was made. I wanted to go to the Olympics as an athlete, playing sevens. But we had a long way to go.

First order of business was to make Canada a “core team” on the international sevens circuit. Since we weren’t at that level during the 2010-11 season, our tournament exposure was limited to only five of the eight HSBC Sevens World Series events.

We all knew how important it was to regain that status, especially now that rugby was back in the Olympics. The experience you get playing top-level rugby is really what allows you to improve as a player and team. That’s something that’s lacking in Canadian rugby. Still, we would get a boost in funding for the program as a whole.

Our opportunity to re-qualify for core status came in 2012. Looking back on that tournament in Hong Kong, it was probably some of the worst rugby we’ve played as a team since I’ve been involved.

Nevertheless, we managed to grind it out and qualify. Grinding out wins was something that we got pretty good at for a while there. It wasn’t always pretty but we somehow managed to stay in games with teams that were probably better than us on paper.

Hirayama and his teammates have bonded over the sometimes difficult journey to have one last chance at the Rio Games. (Kevin Light/CBC Sports)

This year’s definitely been frustrating in terms of results, but there was the odd highlight.

We missed out on the cup round on three different occasions due to point differential, which is always difficult. We upset some big teams, but there were also a lot of games that we would love to have back.

All throughout this season, there’s been this Olympic goal in the back of all of our minds. Our last opportunity to qualify is this weekend in Monaco.

It’s hard even talking about it because I get too fired up. So many of us have literally put our lives on hold for this Olympic dream. Guys have had other opportunities whether it be education, careers or playing professionally elsewhere, but everyone who’s been a part of this team this past season is all in.

People don’t see the work we put in. They don’t see how hard we train, how often we’re playing through injuries and how most of us are literally being held together by tape, not to mention how little we get paid compared to our competitors.

But the reason we do it is because we love it. We love each other’s company. We play for each other. We know that this summer could define our careers and possibly change our lives.

No one can say for sure what’s going to happen this weekend, but what we do know is that the work has been done and we’re going to leave it all out on the field in Monaco.

It all comes down to this one, final tournament.