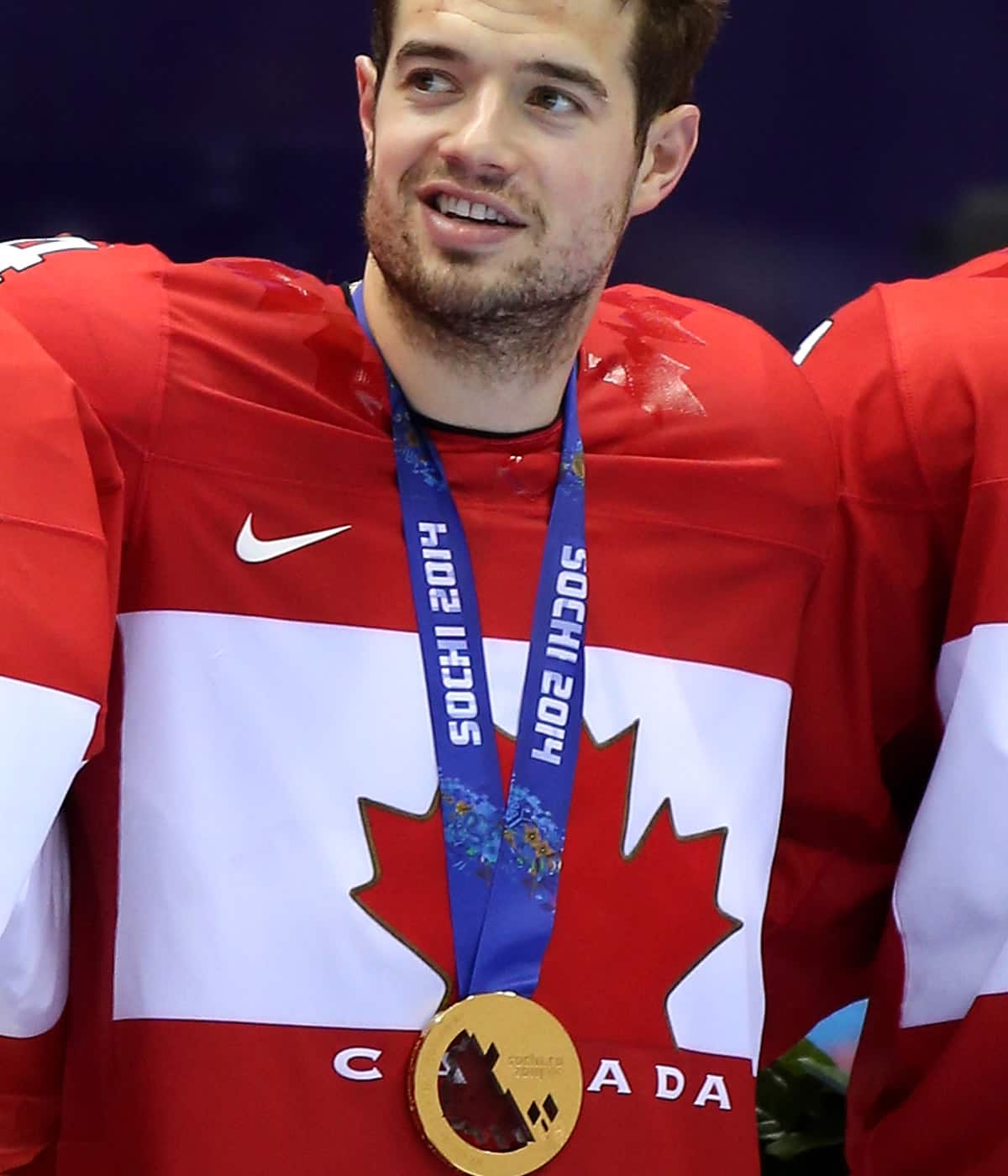 Marc-Edouard Vlasic: The NHL must go to the Olympics

‘If players don’t go to Pyeongchang I will feel hatred towards the NHL,’ says San Jose Sharks defenceman

This POV was originally written for Radio-Canada and has been translated to English.

I was there sitting in front of my TV. It’s a nice TV, but I just had this urge to break it in two.

What I was seeing was completely ridiculous. It was April 3, and the commissioner of the National Hockey League, Gary Bettman, announced that NHL players would not participate at the next Winter Olympic Games, taking place in less than a year in South Korea. And that the case was closed. At first, I told myself they had missed April Fools by two days.

The elimination rounds of the NHL playoffs were about to start. In terms of timing, it was perfect for the league. People were going to chat a bit, then the series would start and all the Olympic stories would quickly be forgotten.

I can’t say that I am disappointed. When you are disappointed you can move on. When you’re in a relationship and that person leaves you, it’s disappointing and you are frustrated. But even if it’s difficult, you turn the page. No, saying that I am disappointed is not strong enough, because this is unacceptable. Players in the NHL should participate in the Olympic Games for two good and simple reasons: First, the Olympic Games must have the best players in the world facing off.

Second, it is the ideal occasion to promote our sport all over the world. If NHL players don’t end up going to Pyeongchang, I will spend the rest of my career (I have always wanted to play until I am 40, so the next 10 years) feeling frustration and hatred towards the NHL.

NHL players went to the Olympics for the first time in Nagano in 1998, but I was only 11 years old. It was Vancouver 2010 that really left a mark on me. I was on vacation and watched every game. It was incredible. It was the best players against the best players.

I knew that one day I wanted to be a part of that. From that moment forward, in my head, I had four years to earn a spot on Canada’s team for the Sochi Games in 2014. Of course, I wanted to win a Stanley Cup, too. But in the background, I was thinking about that spot with Team Canada. It was coming.

I love playing in San Jose. My wife and I have made it our home. But playing for Canada, where you were born and raised? It’s different. Wearing the sweater with the Maple Leaf, it does something to you. As the Sochi team selection announcement approached, my name was on the media’s predictions list, so I had a shot.

My wife Martine and I will remember the day of the announcement for the rest of our lives.  It was at the beginning of January. I was on the road with the Sharks and I had gotten up a little earlier than usual to FaceTime with Martine. We watched the TV at the same time. I will always remember the feeling that came over me when I was chosen. It is certainly one of the best feelings I have had in my entire career.

But as soon as the moment passed, I told myself, “Now we have a lot of pressure on our shoulders, because Canada never loses at the Olympics. Canada isn’t allowed to lose.”

When we arrived in Sochi, we settled in to the Athletes’ Village with all the others in the Canada section. Just to be there, to see all the flags, the buildings, the atmosphere, the other athletes, eating all together in the village … we were jubilant.

All of it is friendly and prestigious at the same time. The men’s hockey final always happens on the last day of the Games. Once the game was over and the gold medal was won, we started to celebrate in the locker room.

An organizer came in and told us that if we wanted to participate in the closing ceremony we would have to take a bus in 20 minutes. I chose instead to join a giant party organized by the Canadian delegation at the village.

Canada defeats Sweden in the gold-medal final at the Sochi Olympics.

Everyone was there. Martine asked me to take a photo with short track speed skaters Marianne St-Gelais and Charles Hamelin, who she had been following for a long time. I didn’t know them, but I approached the couple to ask for their photos. We ended up talking for the whole night.

We exchanged cell numbers, and since then, Charles has become one of my very close friends. His story is incredible. The guy skates two times a day; trains in the gym five-six days a week, 10 or 11 months out of the year. He trains more than any professional I know, including me.

The Games also allowed me to meet Marie-Philip Poulin, Mikaël Kingsbury, the Dufour-Lapointe sisters Kim Lamarre, Dominique Maltais, and Joannie Rochette, to name a few. I found it incredible listening to all their stories.
These athletes are labeled “amateurs,” but those who think they are not professionals are out to lunch.

Honestly, winning the Olympic gold medal was awesome. I still can’t believe it — to rub shoulders with all those people, really touched me. At the end of the night, I realized that I didn’t end up speaking with a single hockey player!

A few weeks later, the Canadian government organized a rally in Ottawa to celebrate Canada’s results in Sochi. Multiple athletes thanked me for being there because usually no hockey players attend the event. I didn’t understand. For me, we are all together. Even though I was injured and it was difficult to travel, I wanted to be there.

Best on best is awesome

The Olympic experience — playing against the best players from other countries — helped me in my career afterwards. There is no doubt that when I returned to San Jose my calibre of play was elevated. I love everything the Olympic Games represents.

NHLers won't be experiencing this kind of celebration if the league follows through on its promise to skip Pyeongchang. (Streeter Lecka/Getty Images)

I want to return to the Olympics every time the opportunity is there, so I would like the chance to go to Pyeongchang.  If Gary Bettman tells me that the NHL isn’t going this time, the next time, in 2022, I’ll be 35 years old. Who says that I will be chosen? I hope so, but there will certainly be good young players who will be pressing. And in 2026, I’ll be 39, short of a miracle, it’ll be practically impossible for me to make it.

I’m not taking this stance solely for myself. Hockey careers are so short that it’s very possible the absence of the NHL in Pyeongchang removes any chance for certain guys to play in the Olympics, simply because this creates an eight-year gap between two participations. For a professional hockey player, eight years is too long.

Since Sochi, everyone talks to me about the Olympic Games. The Olympics are certainly the best showcase to sell our sport outside of North America.

They argue that games played in Pyeongchang would be at a bad time for North American television? I don’t understand that. Didn’t the NHL recently announce some pre-season games in China?

What I’d like is for the NHL to openly give the real reasons for its refusal to go to Pyeongchang.

After I saw Gary Bettman make his announcement, I published this photo on Twitter:

Other guys are also on board: goalie for the Rangers, Henrik Lundqvist and forward Brandon Prust. Alex Ovechkin said he would participate in the Games regardless. The owner of his team said he’d let him go.

It’s a delicate balance. On the one hand, there is the desire to go to the Olympics. But we also have contracts that bind us to our NHL teams, whose activities would continue throughout Pyeongchang. What sanctions will be imposed on the players who decide to participate in the Games anyway? Will they be suspended?

I believe it is the players who have the upper hand. Take the guys who participated in the World Cup. If 10 of them say they’re going to Pyeongchang regardless, the NHL will seriously rethink their decision.

Even though we won gold in 2014, it’s not enough for me. I want to go to the Olympics every chance I get.

Representing your country at the highest level? Nothing beats that.