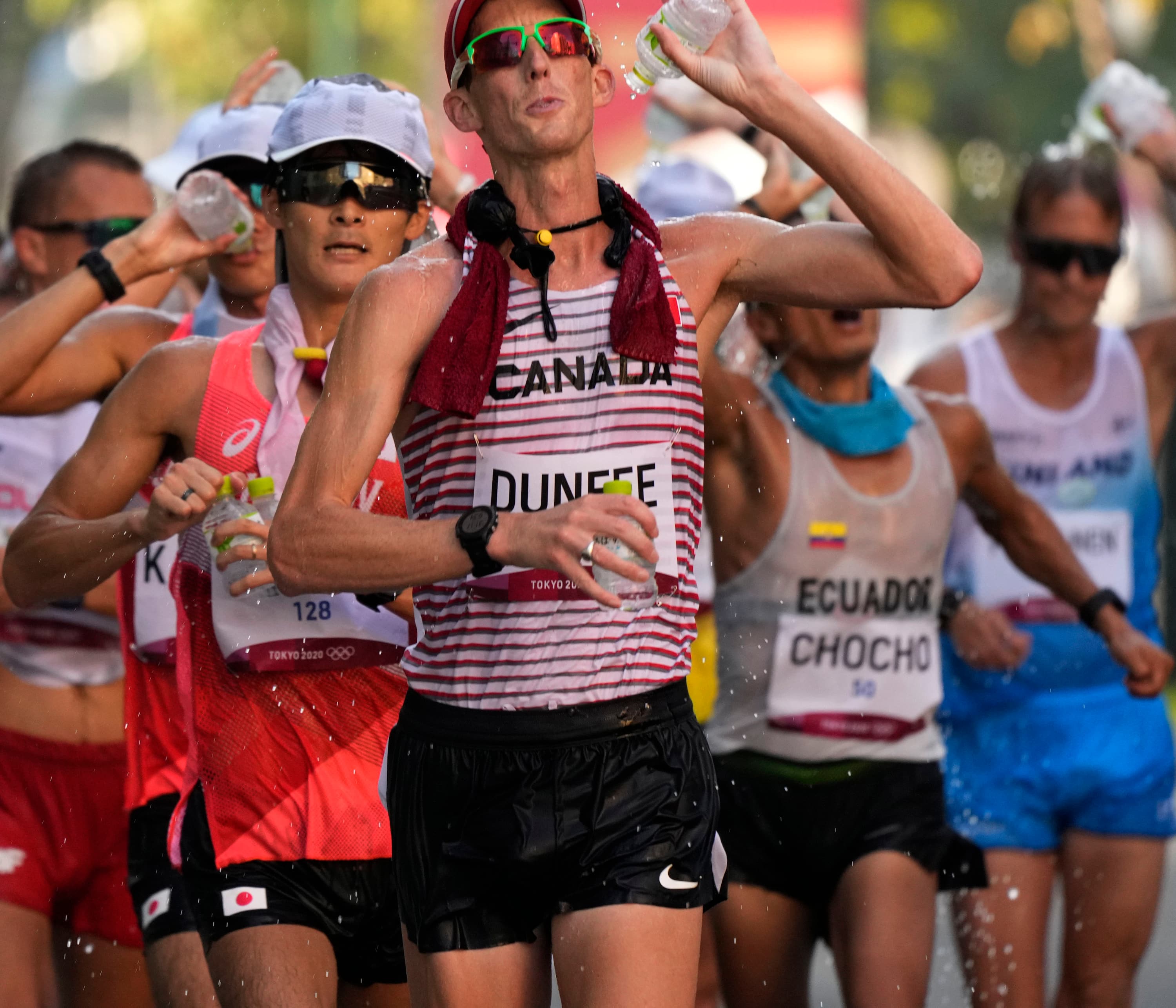 The 2020 Tokyo Olympic Games were unconventional – not least because they took place in 2021, delayed and surrounded by COVID-19.

Discussed less frequently - but perhaps equally consequential - extreme heat added to the uncertainty and risk, both at the Games and during the qualification period for the athletes.

I am a doctoral candidate at the University of Oregon, specializing in cultural studies of sport. I have taken a wayward path toward my PhD, combining my own competitive running, journalistic experience, and several English degrees. When the USA Track and Field Olympic Trials happened in June on campus I was on site both as a member of the communications team for TrackTown, USA, and as an individual researcher. I saw the challenge the heat posed at the ground level, and was struck by the expectations that athletes should “tough it out” in dangerously hot temperatures. Much emphasis was placed on the idea that “Tokyo is going to be hot, so athletes should get used to it!” But should they?

Temperatures soared during the 2020 Olympic Games in Tokyo in August of 2021. (Matthias Schrader/The Associated Press)

The results of this risky undertaking were predictable. In the women’s 10,000-metres, for example, the best distance runners in the country raced in temperatures above 30 C. The performances were incredible, but I’ve never seen such physical carnage on a track.

Watching and covering endurance events, I always understand that athletes are suffering. But seeing them red line in extreme conditions felt, to me, almost voyeuristic. As the women stumbled and collapsed across the finish line, I felt like yelling, not with excitement, but at the trackside official 'water, shade!'

Alicia Monson, a 23-year- old University of Wisconsin alumnus and former NCAA champion, made her first Olympic team, but her distress was palpable as she collapsed with heat exhaustion during the award ceremony. Medical staff at the venue submerged her in an ice bath. Her core temperature plummeted and she became hypothermic, ultimately spending her first night as an Olympian in the hospital.

During the men’s 5,000m on the final day of the trials, an official with TrackTown, USA, asked me not to sit out at the track for the entire morning, but to sit in the air conditioning while I filed my story, as the temperature pushed over 35 C. The irony was not lost on me, that the conditions deemed too precarious for me to write in were the same conditions in which athletes were putting five years of training on the line.

Just after 3 p.m., I got a text that event organizers were postponing the rest of the events until evening. My weather app showed 42 C. The entire Pacific Northwest was burning up under a “heat dome.”

The decision to postpone was seemingly triggered by heptathlete Taliyah Brooks collapsing. As multi-sport athletes, the heptathletes had been out in the sun and heat for the entire session, unlike others who could remain in air-conditioning until moments before competing.

With five hours to go before events would resume, I decided to return home. Even walking to my bike the heat felt oppressive. I could barely get a full breath in. I gave myself a little pep talk: “Take it slow. Don’t raise your heart rate.” Forgoing any interest in my professional appearance, I dumped water into my hat.

The ride home was apocalyptic. Despite purposefully riding slowly, my heartrate felt like I was doing sprint intervals in a sauna. I felt physically ill at the end of the normally easy 15 minute commute.

When competition reconvened at twilight for the final six events, the facility staff seemed better equipped—cold towels were handed out, water was more abundant. I brought Gatorade to sip while sitting in the stands and stuffed a bag of ice under my ball cap—it felt uncanny needing these in order to sit still and watch others run.

TrackTown, USA - the organization that puts on the trials at Hayward Field in Eugene, Ore., urged everyone but competitors to remain inside. (Jay Bendlin)

For those of us working in media, it was noticeable how few athletes were giving interviews. Those who did emphasized that they chose to focus on what they could control, rather than the heat, or found company in their misery by reminding themselves that all athletes were facing the same conditions.

These are helpful mindsets from a sport psychology perspective. But I worry about the fixation on coping with competition in extreme conditions, rather than the sport industry using its clout to sound alarm bells on climate change.

Before the Tokyo Olympics, organizers knew that temperatures would pose a real issue for athletes, so much so that the marathon was moved north to Sapporo.

I watched from home as Canadian marathoners Malindi Elmore and Natasha Wodak passed each other ice bags and water, feeling nationalistic pride in their obvious teamwork. At the same time, seeing athletes I admire redlining in the heat terrified me.

On the same day I watched with discomfort as Dutch athlete Sifan Hassan crawled into the shade under the bleachers and curled into the fetal position, pleading for water, immediately after winning the women’s 10,000m gold.

The heat events in Eugene or Tokyo may not be the new normal, but they will not exist in isolation either. When considering climate change, we often think about the most disastrous impacts— rising sea levels, increased wildfires, super storms, heatwaves, and species extinctions. These issues are big and life-changing.

What we perhaps don’t think about as often is how climate change affects our daily life, the parts that, compared to these disasters, seem perhaps trivial: sport, recreation and entertainment. Because climate change is a scary issue, we don’t often think about how it impacts our fun. Perhaps when climate change steals our fun, we will finally feel the urgency to address it. But if we wait that long, there may be no turning back.

My personal introduction to running, the beginning to my lifelong love of the sport, came from accompanying my mother on runs during summer vacations. I, for one, don’t want to tell my kids that running outside in the summer is something that we “used to do.”