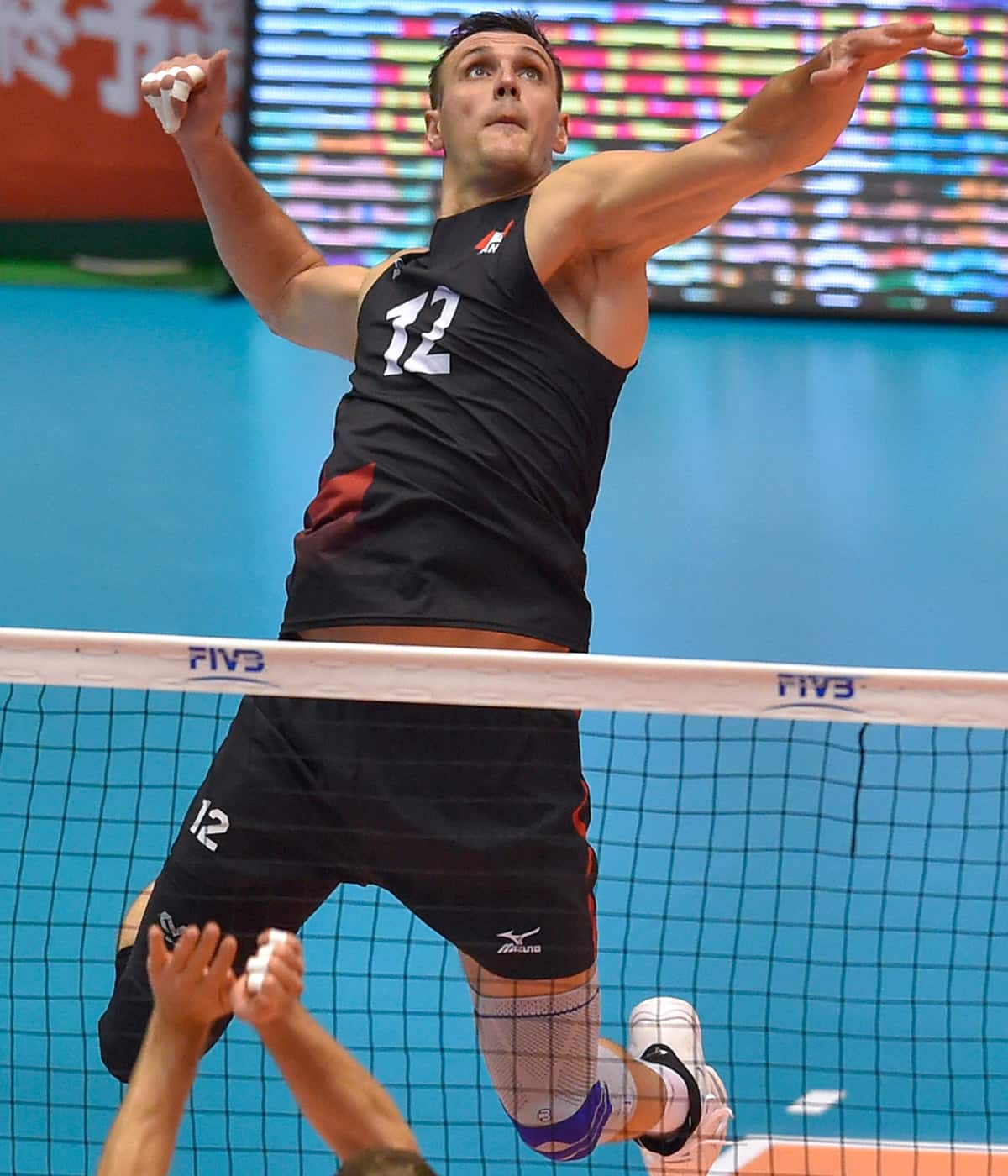 By Gavin Schmitt for CBC Sports
June 24, 2016
The Canadian men's volleyball team breaks out in celebration after qualifying for the Rio Olympics.

I’m sitting in a little coffee shop in Saskatoon mulling over the past 10 years of my life. TEN years with Team Canada volleyball.

One recurring thought is “Oh my God we just qualified for Rio… I GET TO GO TO THE OLYMPICS!” It’s taken awhile but it is slowly settling in that I am going to be an Olympian, something so many people dream of, wish for and work towards.

Pure Joy. That is the only way to describe the moment we realized we had qualified for Rio. I feel like the whole world must have seen and felt us charging out into the hallway to embrace and celebrate with one another.

What people didn’t get to see is how we got there, and how we found out we had qualified. We were at a tournament in Japan and had just finished playing a match vs. China. This match held all the cards for us: win and have a chance to qualify, lose and go home.

We won. We played a full five sets and battled hard, giving ourselves a chance to get the last qualification spot from the tournament. But winning our match wasn’t enough. We had to wait and watch to see if Poland (which was resting a large portion of its starters because the team already qualified) could beat Australia.

A Poland victory meant we were in. Like many others, I was a ball of nerves, knowing I had to sit, watch and hope Poland could pull it out, allowing me to finally live my dream of competing at the Olympics.

I was in a room with some of my teammates watching the game on the web. Poland was up two sets to none and had just tied it up 24-24 in the third set...or so we thought. Then we heard the roar of screaming. Our internet stream was behind.

But I knew. In that moment I knew: “they did it, they just beat them, WE ARE GOING TO THE OLYMPICS!” Thinking back on that moment still almost brings tears to my eyes as it did there in Japan, with so many emotions coming over my body. I wish I could put into words what I felt at that moment, as the cheering stopped and I took a moment alone in my room, tears streaming down my face, overcome with joy, happiness, and a huge sense of relief.

It’s hard for me to paint a picture that could portray how immense qualifying for Rio is for this team. We didn’t speak about it too often, but there was always an underlying feeling of how badly everyone wanted this. We have a group of guys that would do anything for one another and do anything to get that berth to the Olympics.

I have been playing with these guys my whole career and was there as the younger guys joined.  I’ve watched teammates grow and become the great players they are today, and said goodbye as close friends and teammates retired.

Schmitt wasn't sure he wanted to play volleyball, but his mother convinced him to give it a try.

Since there's no pro league in Canada, earning a berth in Rio was no easy task for Schmitt and the Canadian team. (Koki Nagahama/Getty Images)

Getting to the Olympics is no easy task for indoor volleyball. Only 12 teams take part and there are so many strong and competitive teams out there. In Canada volleyball is not a huge part of our culture. We start later and we don’t have a pro league so we’re forced to work harder to catch up technically.

Not having a league in Canada forces us to venture off to other countries to play in their leagues. This gives us just a short few months in the summers to come together, build and play together.

Despite spending more time apart I feel very fortunate to be a part of a team with such great guys. We have grown together and become a family. There are always stories about feuds or teams that don’t get along and we are so far from that. Everyone gets along and gels so well, which allows us to perform well too, and well… not kill each other when we are on the road for months at a time.

It’s a remarkable feeling to finally “get the job done.” We have been so close to qualifying for past Olympics so many times and despite working so very hard we were never able to get it done. It’s amazing to be able to finish this one and get the berth, not just for ourselves, although some of us may never get another chance, but also for the guys who sacrificed so much for this team over the years.

Sometimes when you see the teams that have success the people who put the work in to help build that success are lost because they aren’t with them anymore, but I assure you we did this for them as well.

Most people don’t know that it has been a far-from-easy year for me, and certainly no easy route to that tournament. I got the bad news about a week before our January qualifier that I had a black line stress fracture in my right shin (an injury I have been battling in both shins for years). I would need an operation and therefore would not be able to compete.

I had to sit and watch while my volleyball family gathered in Edmonton and fought for a spot in Rio, a spot we all felt was so attainable in this tournament. Watching via stream while I waited for my call to surgery was one of the harder moments in my life as the tournament did not go as we all expected, and I watched my Olympic dream slip further from my grasp.

Two days later I went under the knife, or maybe I should say hammer. The surgery for tibial stress fractures requires a rod to be hammered down the centre of your shin bone and anchored with two screws, one in the knee and one in the ankle. Thankfully the surgery was a success but now I was not only worried about recovery, but worried that instead of seven months to get ready for Rio.

I now only had four month to be ready for the qualifier and I’d be damned if I was going to miss another qualification process. After laying in bed for about a week waiting for the pain to subside, to get myself off the painkillers, and well, to be able to move, it was time to get to work.

I did my rehab out in Vancouver working with some of the best physiotherapists, strength coaches, and Hydro therapists Canada has to offer. Hydro therapy utilizes water to remove weight and stress so you are able to get moving sooner. I was lucky to be at a place where they had an underwater treadmill with an adjustable floor.

By about two weeks post op the team there was helping me rebuild the muscle I lost in my legs. I started walking and moving in the water and training my upper body. The whole process was quite grueling and time consuming, but great people who wanted to see me healthy and get a chance to qualify for Rio surrounded me.

The work begins all over again for Schmitt. (Masashi Hara/Getty Images)

It was April 20 when I finished up my rehab and left to rejoin my team. We did in three months what would normally have taken five to six to complete. I had around a month to get back to playing form and help my team qualify in Japan. It must be true that hard work pays off because we did it and now I am here writing this for all of you to read.

So what now? Well, now the work begins all over again. I have precious few days until the opening ceremony in Rio, and I need every single moment to ensure I am healthy and ready to compete. The days ahead will be filled with weight training, ball training and competition in the form of world league.

It will be a busy time as I physically and mentally prepare myself for all that is to come.

It has been 24 long years since Canada has had a men’s volleyball ball team represent at the Olympics — a drought by any other name.

This means I need to be physically and mentally ready so I can represent our country well. I don’t take it lightly to wear the Maple Leaf on my chest and compete for my country, and now I am set to do it on the biggest stage in sports.

What an incredible feeling it is.