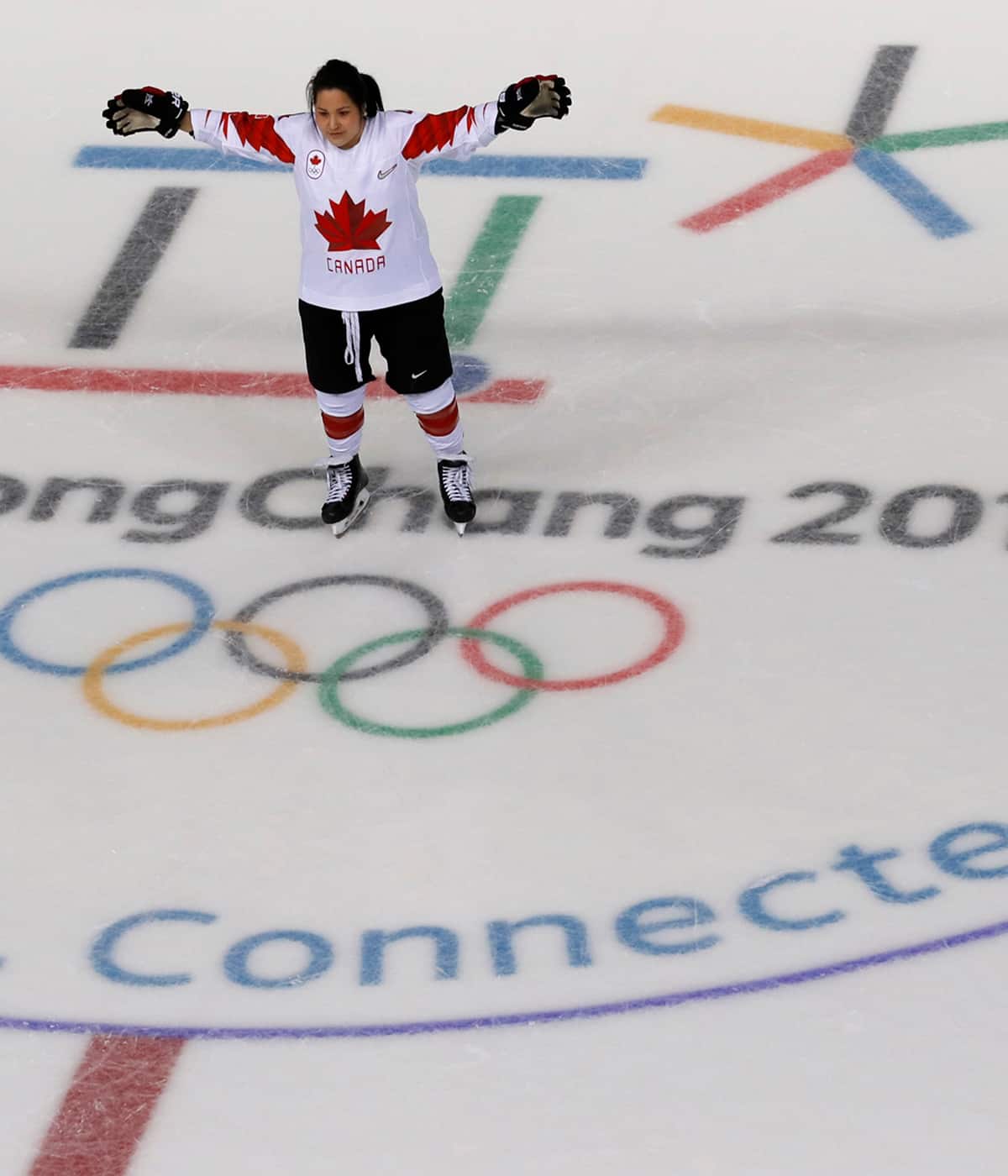 From Indigenous tournaments to the Olympics, it’s all about family

'Native hockey is very creative. I learned by watching.'

Hockey has opened a lot of doors for me.  I set goals when I was young: an NCAA scholarship, playing on Team Canada, playing in the Olympics.  It has been quite the journey.  I have overcome obstacles and faced racism repeatedly.  The negative experiences came with teachable moments, and resulted in more positive experiences.  The good outweighs the bad in this story.

I started hockey at the age of 5.  My minor hockey career started in Winnipegosis, playing on an all-boys team. When we didn’t have enough players to ice a team, we eventually moved associations to Ste. Rose Minor Hockey.  I was one of three girls on the team, in a male dominated sport.  My dad always told me to protect myself. He knew it was a very rough sport, and I guess in his way he taught me to stick up for myself, and to make sure I didn’t get pushed around. So I tried my best to intimidate the boys I played against.

I played hockey on a boy’s team and an all-girls team.  Growing up in a small community, four hours north of Winnipeg (and an hour from the nearest hockey rink) meant a lot of time spent in the vehicle.  I travelled to a lot of league games and minor hockey tournaments.  I am a First Nations athlete. Our nations hold their own Indigenous tournaments. I’ve played in those my entire life. As a fan of the sport, I loved to watch.  The prairies have some competitive hockey, especially at those Indigenous hockey tournaments.

Growing up in Mallard, Manitoba, and being treaty from Cote First Nation, Saskatchewan, gave me opportunities that most kids didn’t have.  I could participate in all the native hockey and softball tournaments across the prairies, as well as representing my Reserve and Tribal Council at tournaments like the Tony Cote Winter Games and FSIN Hockey & Fastball Championships.  In a way, I had the best of both worlds.

My early memories of minor hockey stem from tournaments such as Dakota Winterfest or the Tony Cote Winter/Summer Games (formerly known as the Saskatchewan First Nation Winter/Summer Games).  These games were established in 1974 by Chief Tony Cote and the Council of Cote First Nation.  They felt that the majority of the First Nation youth were excluded from mainstream sport systems.  Creating these games gave kids like myself the chance to participate in the sports we loved.

Native hockey tournaments have grown into cultural events, giving First Nations people  opportunities to gather and bond over their love of the sport. The Dakota Winterfest was always one of my favourites. It’s one of the biggest Native Hockey tournaments in the prairies.  I could always count on it being a family event. My cousins, aunts and uncles would be there, and of course I could always count on watching some good hockey.

Lacquette's life in hockey began by playing keep-away with her dad and uncles.(Submitted by Brigette Lacquette)

No one starts out as a professional athlete.   When I was young, I could barely skate, but I was still so eager to get out on the ice.  My dad often tells a story about my first time playing at this tournament. He was in the stands with my mom, and there was this couple sitting a few seats away, being entertained by watching us skate. When they noticed me out there, and my awareness and knowing where to go on the ice, they mentioned that it looked like I knew where the puck was going before it got there.  It was obvious that I wasn’t afraid to play, even though I happened to be the only girl out there.

The first time I remember playing in front of my family was on the outdoor rink, where my uncles and dad would play keep away from me. They had all seen me skate.  I remember being excited just to be out there.   As I said before, I tried to be mean on the ice and make the boys scared of me, and that’s what I did. My sister Tara was a goalie, and my dad always told me to protect the goalie. “No one touches Tara”.  If anyone even came close to her or decided to poke her glove if she had the puck covered, I made sure they knew that was a bad choice.  Looking back, I may have gone a little overboard with my aggressiveness in protecting the net. But after a couple of years and hours of practice, I was able to contribute meaningfully to my teams.

I have a favorite memory of my sister and I at the Tony Cote Winter Games with the Yorkton Tribal Council. My late grandpa, Bill Bryant, took care of us at the tournament, because my parents had to work.  He was always so proud of us, and he loved to watch us play hockey, especially when we were representing our tribal council.  To be honest, we didn’t do all that well that time, but the memory sticks with me.  Grandpa was there watching, spending time with us

A lot of the stickhandling “moves” I picked up were at native tournaments. The games there taught you to play with your head up, and how to pick up the puck with your stick, Lacrosse style. They taught you to be aware at all times.  I learned by watching.  I noticed that the older players often used head fakes, and almost always did evasive moves with the puck. You learned how to sauce a pass through other players.  You saw this all at the tournaments, every single shift.  It’s Rez hockey.

Native hockey is very creative as well. It can look non- structured at times, but it is very rewarding when you find success.  It’s hard to describe - anything goes on the ice. If a move doesn’t work, you try it again until it does.  You’re not afraid to make a mistake.  It’s freeing. I’ve learned many different skills by playing this way, and I credit this type of hockey for how I am on the ice. It has helped me get where I am.

The thing that excited me the most, growing up playing these different Native tournaments, was the sense of family. I knew my family would be at all these events, and they would always  support me.  I realize now how important family has been to my success. I am always extremely grateful for where I am today, because I know that, without my family's endless support and positive words, I wouldn't have made it as far as I have.