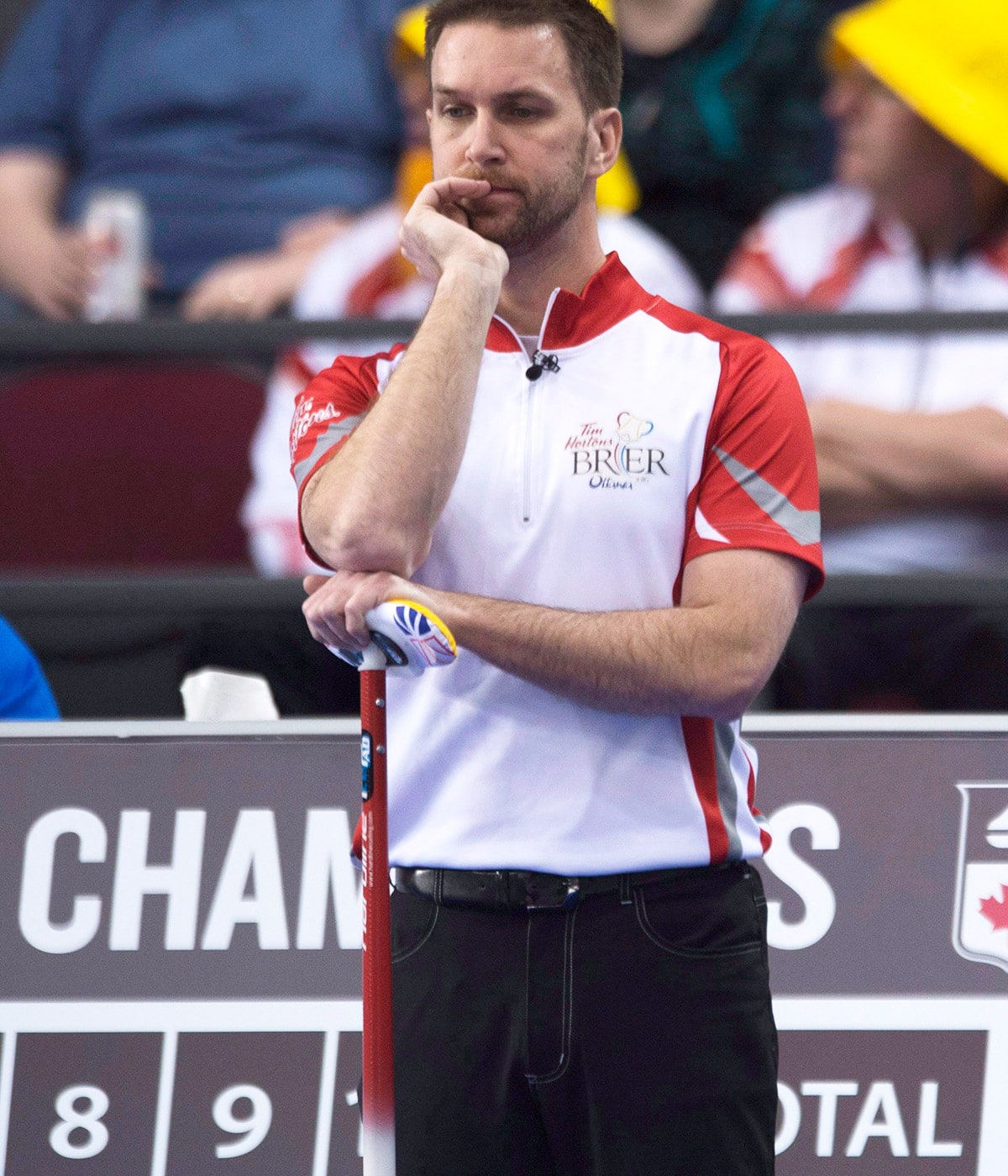 ‘It’s not like this is a big year or anything. The Brier is only coming to my hometown,’ says St. John’s skip

Brad Gushue’s injury odyssey began with the now infamous face plant on the ice 14 months ago at the Grand Slam of Curling Masters. (Justin Tang/Canadian Press)

It was the Grand Slam of Curling Masters in Truro, N.S.

My teammate, Mark Nichols, took to the ice and threw his final rock in the fourth end of the quarter-finals against Steve Laycock.

I had crouched down, intently watching his shot. Jumping up to get out of the way I lost my footing. Bang! In fine style I busted out a new move: a stylish face plant. To some teams on tour it has been referred to as "The Gushue"

That marked the beginning of what has turned out to be the toughest 14 months of my curling career.

The infamous groin/hip injury followed, along with the subsequent eight months of not knowing when I would throw another rock.

It’s not like this is a big year or anything. The Brier is only coming to my hometown for the first time in 45 years. It is also the last year to directly qualify for the Olympic Trials. And with the Trials looming next fall, teams are trying to secure as many points as they can this season. To say I was feeling the pressure is an understatement.

Most days it was the mental struggle that was worse than the physical one. The uncertainty of whether we were rehabbing the right way, waiting patiently for improvement, and wondering if I would be ready to compete in our playdowns for the Brier.

This was all far worse than the painful physiotherapy sessions or long hours spent in the gym doing tedious exercises. Prior to this season, I had never missed a game due to injury. This year I missed 47.

Despite these setbacks and my absence, our team remains in the top spot on the World Curling Tour’s Order of Merit.

The credit goes entirely to my teammates Mark Nichols, Geoff Walker, and Brett Gallant, who continue to make the right calls and throw great shots. Mark willingly stepped up as interim skip and they persevered.

To some rinks, the fall has been dubbed "The Gushue."

Gushue (right), along with Brett Gallant (left), Geoff Walker, second from left, and Mark Nichols have shown other curlers the value of fitness. (Justin Tang/Canadian Press)

Last month, I decided to play in The National in Sault Ste. Marie, Ont. While I was nowhere near 100 per cent physically, I needed to get back on the ice, for my own sanity. Being away from the game had given me a completely different perspective about what was happening “inside the ropes.” I walked back into the locker room and was more observant than I had been in the past.

I realized that I had become oblivious to the changes that were happening around me. I thought back to the late 1990s and early 2000s, when we first started to play on tour. We were referred to as the "flat bellies," the ones who did a lot of things right.

When some of the curlers at that time were drinking beer and living large, we worked out, got our rest, watched our nutrition, and worked with a sports psychologist.

Many criticized us at that time for following such a strict regime, but when I walked into the locker room in Sault Ste. Marie, it was evident that these views had changed. I was greeted with six packs of a different kind and everything from compression wear, branched-chain amino acid (BCAA) supplements, protein powders and other products designed to improve your game.

Competitive curling teams today are in top physical shape, and recognize the importance of overall health and fitness when competing at the elite levels of curling.

While I am only 36-years-old, I have been playing on tour for 18 years. I have gone from being the kid with a ton of potential, to being one of the veteran curlers.

From playing guys I looked up to as a kid, like Kevin Martin, Russ Howard, and Jeff Stoughton, to playing guys that were kids when we won Olympic gold back in 2006. It has been a huge adjustment for me and it seemed to just happen overnight.

My role has evolved over the years from being the protégé to being a teacher. This is one aspect of the game that I have really come to enjoy. I was always someone who asked a lot of questions with the guys I looked up to.

I made sure I retained all the information that I could. Now that I am the one being asked the questions, it feels good to be able to share all that I have learned along the way.

Gushue will have the added pressure of playing in front of his hometown fans when the Brier comes to St. John’s, NL in March. (Jeff McIntosh/Canadian Press)

It's no secret that my next curling goal is to win a Brier championship, and I can't think of a better place to win than in my hometown.

At the 2013 Brier Edmonton, I wrote on Twitter: “It’s time for a Brier in St. John's." Immediately I began to receive positive feedback and it continued throughout that Brier.

When I returned home, the meetings started and eventually an official bid committee was formed. Many people ask me what my role was in getting the Brier to St. John’s. My typical answer is “instigator.”

The city of St. John’s and the province of Newfoundland and Labrador are bursting with excitement for the Brier in March. The event has sold out all the initial tickets, and will almost certainly be a complete sell out when it starts on March 4.

It is not only the chance for us to play for our hometown fans, but also a great opportunity to showcase our beautiful city and province to the rest of Canada and the world.

When I heard St. John’s had won the rights to host the Brier in 2017, my focus immediately went to playing in it and hopefully winning it. I have played against the home team 13 times at the Brier, and it is usually one of the more difficult games that you have to play.

Curling fans are very knowledgeable and respectful, but when they are cheering for their home team, things can sometimes change. You hear cheers for misses, the odd heckle — I personally think it is great. One of the best curling environments I have ever witnessed was at the 2010 Olympics in Vancouver.

The fans there were so energetic, screaming and cheering, and even singing. I would love to see the fans in St. John’s make it hard to play team Newfoundland/Labrador, while still being respectful of course.

If we are fortunate enough to win our provincial championship and represent Newfoundland/Labrador at the Brier in St. John’s, it will be difficult to keep the emotions in check.

I have always been so humbled by and grateful for the overwhelming support we receive from our fans and our province as a whole. Home crowds generally raise a team up. However, sometimes playing on home ice can serve as a disadvantage.

It all comes down to the perspective and preparation of the home team. While not getting too far ahead of ourselves, we have discussed many of these challenges and have put a plan in place.

We will make sure we are ready, but one thing is for certain, I will love every minute of it. While it has been a tough 14 months, I truly believe the best is yet to come.