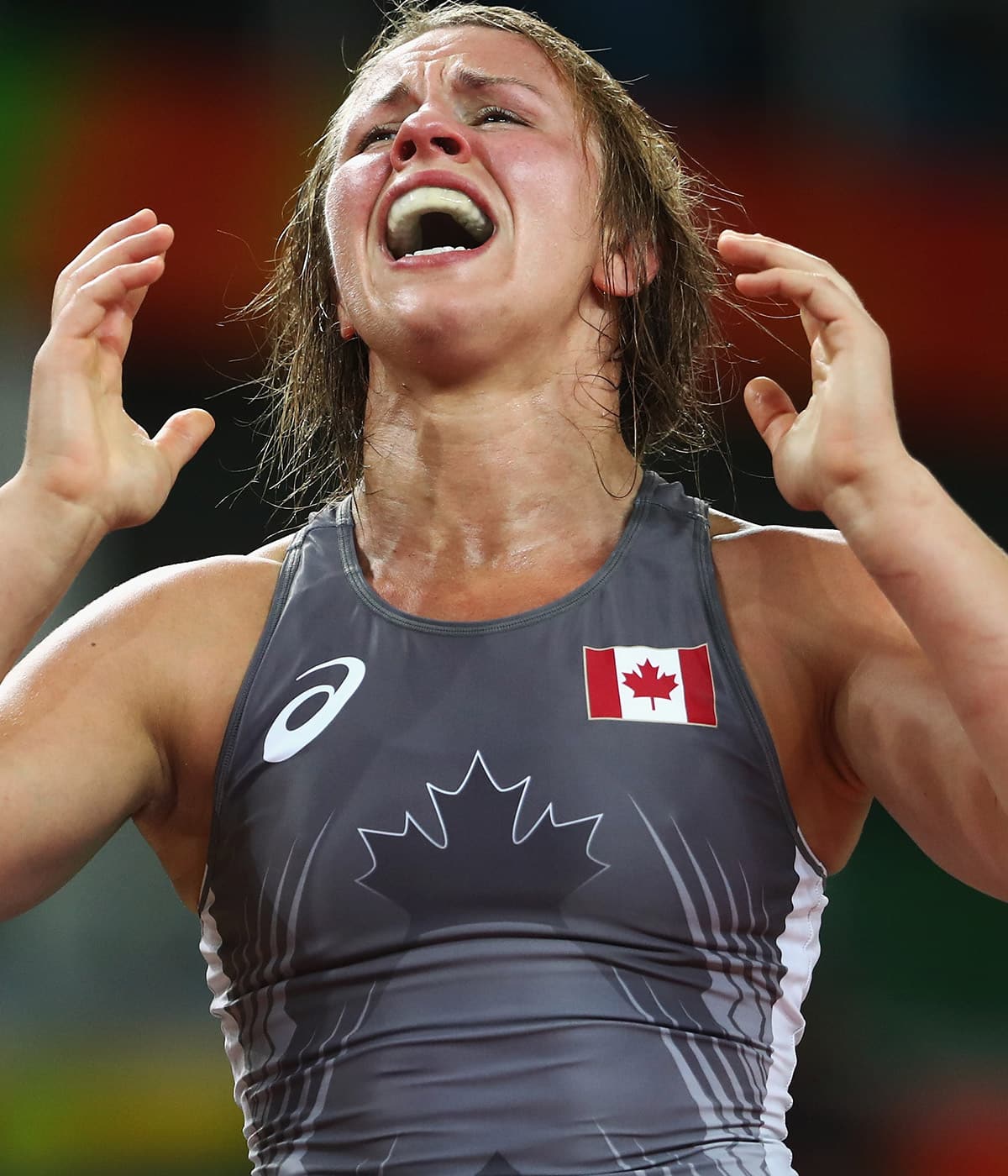 Erica Wiebe was a failure — until she wasn’t

'I want to be defined by 3,000 days of training, not the one day I won gold,' says Olympic wrestling champion

Would “the Heartbreaker” be a good WWE name for me?

Since returning home from Rio with some new hardware, an offer from the iconic wrestling/entertainment brand was probably the most surprising opportunity yet.

At the end of November I will head down to their headquarters in Florida and see if their star-making machine is for me. But the fun doesn’t end there. My gold medal has taken me to fascinating places like Iqaluit, to share my story with the kids there, and in December I hope to be drafted into the Indian Pro Wrestling League, which brings together the top freestyle wrestling talents from around the world to compete in front of millions of TV viewers.

Fun as all of this is, winning gold at the Olympic Games doesn’t guarantee a life of fame or fortune. Riches are especially not the point in freestyle wrestling, but that’s not what motivated me to stay in the sport for this long.

Nine years ago to the exact day, I followed the tradition of so many big dreamers and moved west, to Calgary, to chase after my big, crazy dream. I was wrestling at the University level for the first time, and I was completely and utterly pointless. Literally.

I had not scored a single point in two months, I was sore in places I never knew existed, tired, worn out, and questioning everything I knew about myself. Every day was a grind as I was pushed to my limits, mentally, physically and emotionally.

I had worked 10-hour days the previous summer to afford the move, and I was still taking on massive student loans. I had left behind my friends and family to chase after this dream of being the best in the world in my sport. I loved wrestling, but on this day I was failing.

I was homesick and unsure of myself but every night for two hours I got to forget about everything and do what I loved; wrestle. I moved to Calgary in the fall of 2007, about three months before the Canadian Olympic team trials.

There were all these athletes vying for one spot in each of the four weight classes for the Olympic Games. I was a young, fresh-faced rookie entering a room fraught with tensions as my teammates prepared to compete against each other to earn the honour to represent Canada at the 2008 Olympic Games in Beijing.

Failure is a natural part of wrestling. You get taken down over and over, and it takes strength of body and mind to keep getting up and keep coming back in. If you survive the training, then you earn the right to be on the team. It’s that simple. Survive, and you live another day to wrestle. I remember running up and down the stairs of the Olympic Oval one particular morning, weighing the pros and cons of intentionally falling down the stairs; because that seemed like a better alternative than finishing the workout.

But those are the moments that define a person.

I never threw myself down the stairs. I just kept moving one foot in front of the other. I got up when I got taken down. Covered in sweat, often with tears; but always upwards and onwards.

On July 21st, 13 days before our flight left for 2016 Rio Olympics, I went into practice feeling those same feelings of fear, doubt, and struggle, facing the very real possibility of failure.

I had been pushed in the build up to the Olympic Games in a way I had never experienced. My coaches had promised they wouldn’t ask me to do anything they didn’t think I was capable of, but there were many times when I didn’t think I could do it.

On that day, after another tough practice; Olympian champion Carol Huynh — my teammate, coach, and friend — shared with me her journal entry from this day eight years prior. I had trained alongside her when I first moved to Calgary. I had seen her struggle and fail but continue to push forward. I had also woken up at 4 a.m. that summer to watch her win Canada’s first-ever Olympic gold medal in women’s wrestling.

Reading Carol’s journal entry, at one of my darkest moments, at one of the most uncertain times in my life, gave me a glimmer of hope that it was all going to be okay.

That same day, in my journal, I wrote:

“I fear for the uncertainty of what is ahead. I am scared. I know I am a good wrestler but I am scared that on the day when it matters most, I will not be ready. I’m scared that I’ll be overcome with fears, nerves, anxiety with what is ahead of me,” I wrote down all these feelings and continued, “for me, ready means when I step on the mats, embracing these feelings and knowing that I’ve done everything I could and that I’m ready to go into battle and give it my all.”

On the morning of my Olympic match in Rio, I already felt like a champion. We strive to be the best, to win, for that moment on top of the podium; but those moments are so fleeting, so uncontrolled, and so rare. We spend the majority of our lives in pursuit of that one goal.

I spent roughly 3,000 days training for the one day I competed at the Olympic Games.

There is no secret formula. Fear, doubt, struggle, failure; they are all part of the secret to success, to true, deep, “rattling your bones,” kind of joy. Without experiencing all those emotions, I wouldn’t have been able to stand tall on top of the Olympic podium and sing my national anthem.

Winning an Olympic medal in Rio will not be the pinnacle of my career. It was one amazing day in the story of my life. I went back to practice about six weeks after competing in Rio, and am as motivated as ever to continue and be better every day. After all, Tokyo is only a four years away.