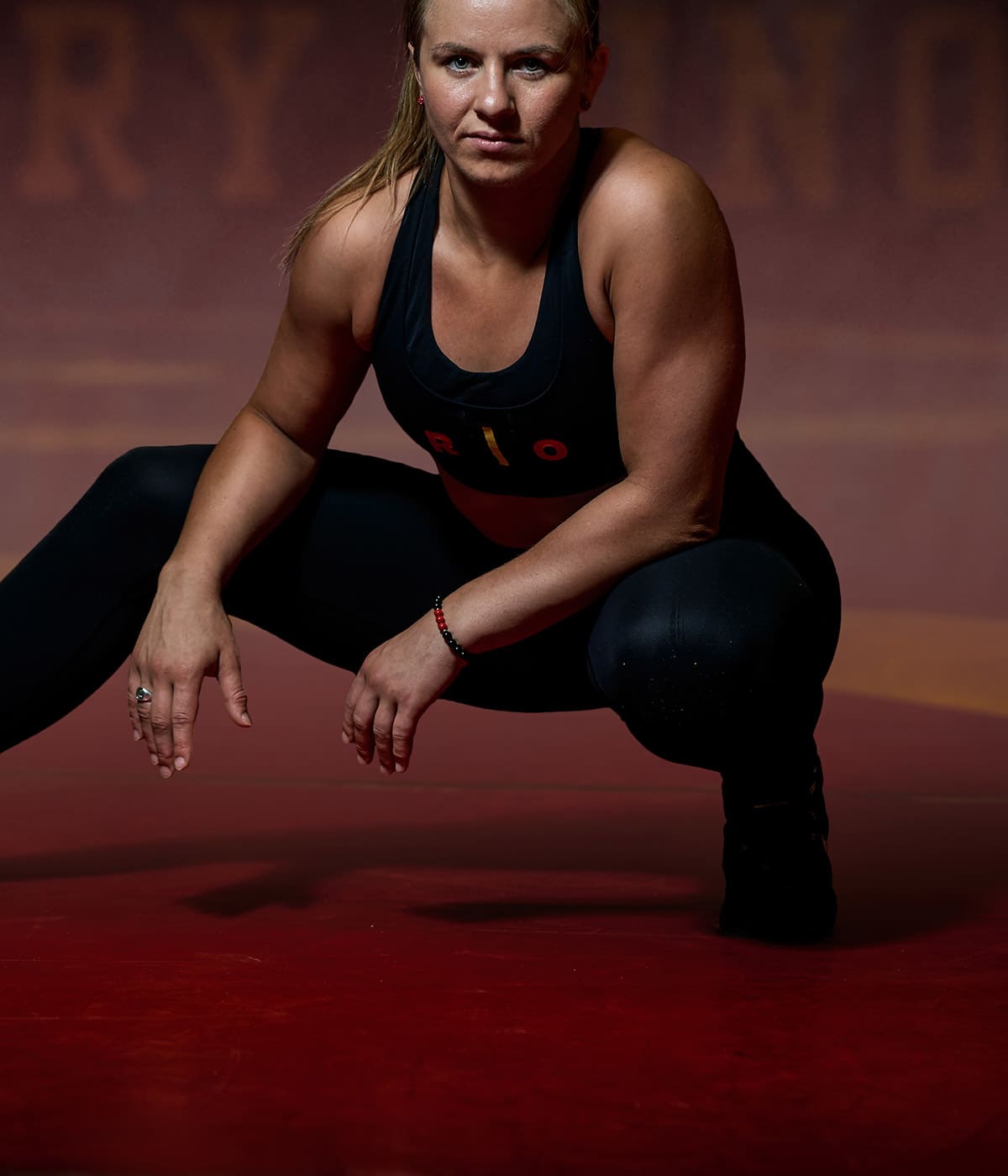 ‘I like flipping others over, NOT flipping myself over,’ says Canadian gold medallist

The drums beat frantically over a chorus of 6,000 screaming fans. I was feeling anxious, sweaty and slightly annoyed by the silky hood pulled over my head.

It didn't take long for Olympic wrestling champion Erica Wiebe, right, to know she was in a different world. (Photo source: WWE)

I was about to walk out and represent the Mumbai Maharathi in Season 2 of the Indian Professional Wrestling League. It was Freestyle Olympic Wrestling; it was real and it was spectacular. I spent the month of January 2016 living in the heart of Delhi, selected as team captain; leading motivational pre-match talks in four languages, making decisions on our team’s match strategy and relishing this small taste of the fast-paced environment of professional sports.

Since spending January in India, wrestling-related adventures have taken me to Sweden, Ukraine, Australia, Iceland, and across Canada this year. If there is one question I hate fielding from people, it is “where in the world will I be next week?” Anyone who knows me knows that “joie de vivre” runs deep in my veins. I seek out new adventure, new opportunity, and most importantly, new challenges.

So, when the WWE approached me and offered a visit to watch the Mae Young Classic finale in Las Vegas with a follow up stop at the Performance Center in Orlando, Fla., I’m not going to lie, I was immediately intrigued by just about everything that this opportunity would involve.

And so I went.

I had never watched a single WWE event before I walked into the Thomas & Mack Arena in Las Vegas. The moment I entered the building, I was ushered backstage, walking through private dressing rooms, and getting my makeup done for the red carpet alongside Stephanie McMahon.

Ronda Rousey and the cast of G.L.O.W. — Netflix’s series on women’s wrestling — walked the red carpet just before me. Needless to say the media was less interested in a relatively unknown Canadian freestyle wrestler, but the entire event was celebrating a new era in women’s WWE wrestling. This era disrupts previously conceived notions of Divas and embarks on a new voyage in which women are recognized for their athleticism, and diverse notions of femininity are celebrated. Now this is a WWE I could see myself in!

That night, I witnessed what this new world of women’s wrestling is all about. I was transfixed as Kairi Sane flew from the top ropes and battled against former MMA star, Shayna Baszler, claiming victory at the inaugural Mae Young Classic. I watched Calgary’s own Natalya Neidhart — from the famed Hart family — defend her Smackdown women’s title. By the end of the night I knew I had to try this out for myself.

Two days later, I walked into the WWE Performance Center in Orlando and laced up my shoes for my first foray in professional wrestling. To be honest, I was pretty cocky as I climbed between the ropes. I had dedicated the past 10 years of my life to mastering the craft of freestyle wrestling — how hard could a little fake wrestling be?

We started off with some basic tumbling (skills I do every day at wrestling practice) and I felt immediately comfortable. We quickly moved on to the fundamentals of professional wrestling. I was honoured to be working with former wrestler Norman Smiley and a number of the resident wrestlers who have moved to Orlando from all over the world to pursue their WWE dreams.

As we worked through various basic skills, I quickly realized that every instinct I had as a freestyle wrestler was counter to what was needed in this ring. As a freestyle wrestler, you need to be low, heavy with your hands, pummeling your opponent, wearing them down, and eventually twisting and torquing their body to your will (at least, that’s my usual modus operandi). In the world of professional wrestling (despite how it may appear on TV) every movement is carefully executed, as you work in sync with your partner’s movements. The intensity comes through your own actions rather than the actions you impose on others.

I learned a bump — where you throw yourself down onto the mat, landing with that distinctive crack. I was warned, “Keep everything tight, land flat and disperse the weight across the ground,” but on my first attempt, my brain battled with the impact.

I eventually mastered the skill, and immediately after that, we progressed to a flip-bump — where you do a forward flip and land onto the ground and on your back. I watched as one woman showed me and I was terrified. I like flipping others over, NOT flipping myself over.

I finally realized that this would be a lot different than the wrestling I was used to. I was reminded of one of many mantras that got me through 2016: “If your dreams don’t scare you, they’re not big enough.”

I was scared. It seemed like such a simple skill but it was something I had never done before, with a group of strangers watching, and all the expectations on me to perform. I asked if there was a mat to try it on first (there was)… I took a deep breath and I kicked myself over. Boom. I landed, no brain rattling this time. I did it.

Take a risk. I sure did. Put in the work. Defy expectations. Be a little dangerous. And be you. It will always be enough.

For now, I am returning to my life in Calgary. Training in a little padded room in the basement at the University. The next adventure for me will be to try life in the corporate world. In the next few weeks, by day, I will be working as a consultant at Deloitte, translating what I know about excellence, leadership, and passion into the processes and systems of different industries and more than anything, soaking up a whole different world of information.

It is a flexible work opportunity that will provide balance in my life and most importantly, support my focus on competing at the next Olympics in Tokyo 2020.

As for the WWE, everyone there knows I’m committed to Tokyo but they have left the door open for me to try again after the Summer Games. Will it lead to a life in professional wrestling? Only time will answer that question.

No matter what I do, today and in the years to come, I will continue to seek out new challenges with optimism and relentless passion.