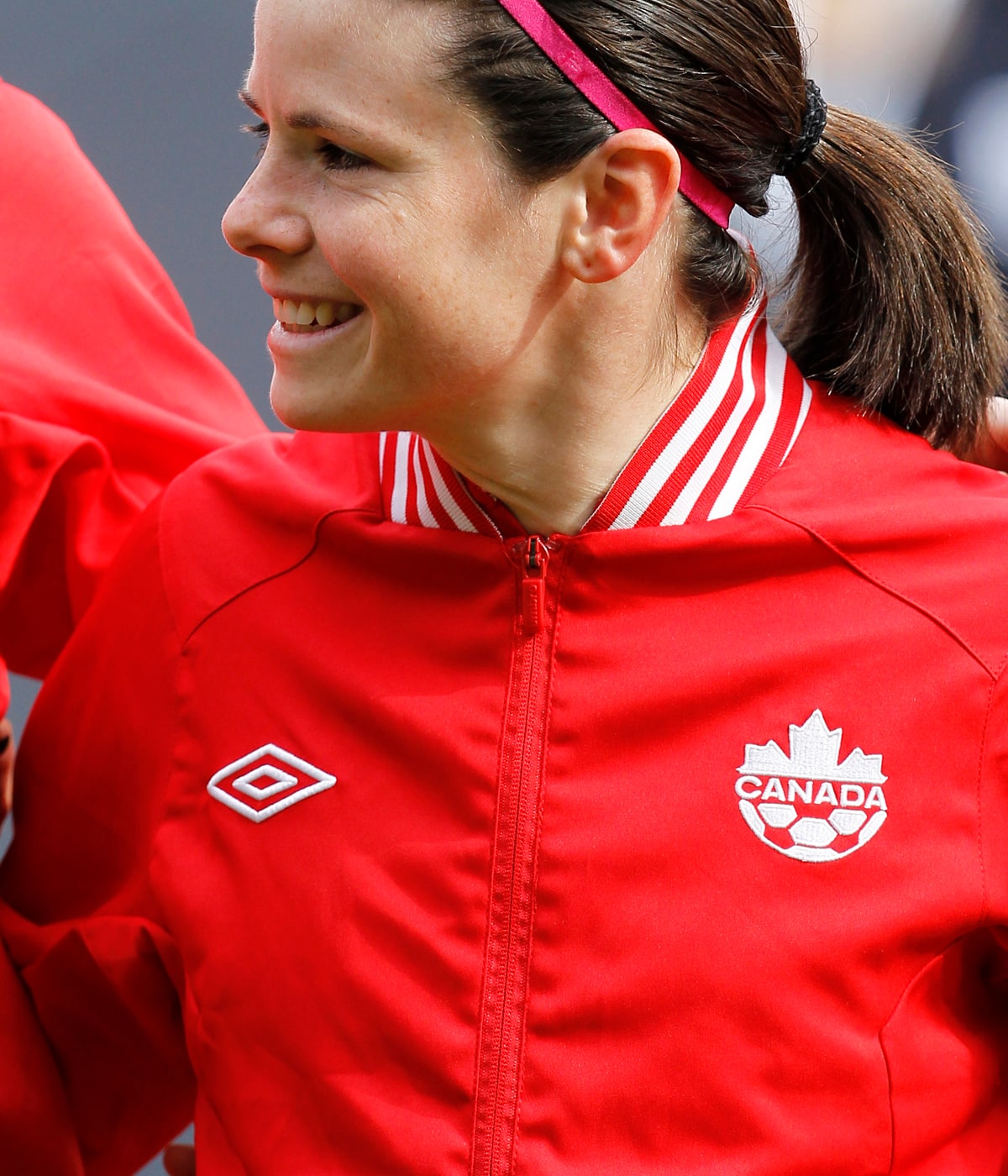 I want a kid from Canada to wear the uniform of their team at a hometown women’s professional match.

I’ve had the privilege to play at the highest level for 18 years.  My knees and feet are scarred from a half-dozen surgeries.  They tell me there’s not much left to do for my abused “lucky” left foot.  If you have seen me in action, I hope you saw a player who relentlessly covered every inch of the pitch for club and country.  What I lacked in physical stature, I made up for in leading with intensity and determination.

I retire knowing that I finish my competitive career the same way I tried to finish every single game for Canada:  I have left everything on the field.  My head and heart want to be with my teammates at another Olympic Games, but my body has told me, in no uncertain terms that’s not happening.

The London 2012 Olympic Games defined my career.  Canadians rallied behind our team like never before.  First, there was the dramatic semi-final 4-3 overtime loss to the USA, complete with a Christine Sinclair hat trick and bizarre refereeing.  Then, in the bronze medal game against France, Sophie Schmidt took a shot in the dying minutes.  It deflected off a French defender.  With six other Canadians around the French goal, the ball bounced to me, time slowed, and I got to put the ball into an empty net.

I will never forget the overwhelming joy and relief in that moment. It was surreal.  We earned Canada’s first summer Olympic team medal since 1936.

In my career, there’s ‘before London’ and ‘after London’.

After London, money, agents, and our platforms all started to grow. Sometimes I’d get recognized on the subway. An employee at my favourite FroYo place said, “you look like that girl in the paper”.   After London, Canada Soccer’s involvement in the National Women’s Soccer League in the United States resulted in more Canadian women playing professionally in North America. After London, the next generation began to shine, and pushed us to back-to-back Olympic podiums with a Bronze in Rio in 2016.  First time Canada has done that in more than 100 years. After London, the next generations were hungrier, and more prepared than ever to get Canada to the top of the podium.

Before London, we were a team that had ‘potential’, but humiliatingly lost every match in our 2011 FIFA World Cup campaign.  The team that went to London was largely the same roster. Same players, different team. John Herdman came in just nine months before the Olympics.  The right team and the right coach, coming together at the right time in both  careers. Under John and his staff, we prepared harder, smarter, and better than ever before. What was truly different though, was our vision. We finally knew our ‘Why’.

John asked us why we came back year after year, to fight and bleed for Canada, without much to show for it. Our answer became clear.  We wanted to leave Canadian soccer better than we found it. We wanted to push the bar higher for the next generation. We were a group that had played with Silvana Burtini and Charmaine Hooper and Andrea Neil – we knew what playing for your country meant. Leaving the game without making our own mark became unacceptable to us.  We knew that to change things, we had to win something, and we needed to win it in London.

Diana Matheson gets a hero's homecoming from the London 2012 Olympics. (J.P. Moczulski/Canadian Press

We went to London 2012 to ‘See Our Flag Rise’.  We did everything better than we had before, so that we could stand on the podium and watch our flag go up to the rafters as Olympic Medalists. Nothing less would have been good enough.

London will always be my favourite journey. Not just for that goal against France, or for the medal, but because of everything that went into it with that group of women – and the women before us. When I got to put the ball in the back of the net against France, I grabbed the Maple Leaf on my jersey in celebration, and I grabbed it because that moment was so much bigger than just our team.

2012 is almost a decade ago now, and the time since has been exciting for Canadian Soccer. We hosted a successful FIFA Women’s World Cup in 2015, our players win Champion League titles in Europe, our Men’s National Team is on the rise. Where things still look the same though, where we haven’t yet moved the needle, is the women’s game within Canada.

Our youth system is vast and successful, our participation for girls and amateur women is envied, our National Women’s Team, one of the best in the world. It's time to start building out professional soccer landscsape.

I gave a speech on this topic a month ago, and it occurred to me then that being a women’s soccer player from Canada is like trying to cross Niagara Falls on a tightrope. Very few people get to do it; those who do have incredibly high levels of skill early on.  There’s no second chances for slow learners on a tight rope. You need a lot of luck, and the right conditions to even attempt it,  and if you are one of the few Canadians that make it, you inevitably end up in another country,  playing out your career in the USA or overseas.

We need to build a bridge. We need to provide pathways for the 99% of Canadian women who aren’t lucky enough to be identified for our National Team by the age of 15. The ones who are talented enough to play professionally, but leave the game because there are no better options. We have the second-highest participation in the world for girls and women, but not enough places for our women to play.   This goes for our coaches too, and referees, and GM’s, and executives, and club presidents. We can create more pathways, and more opportunities, for women and diverse voices to stay involved in sport.

We need a NWSL franchise in Canada, and we need a Canadian women’s professional soccer league. This might seem far-fetched to some, but that’s only because we haven’t done it yet, and it can get here sooner than you think. The value and investment in women’s sport is growing rapidly around the world, and Canada can be a part of that movement. Our women’s sports industry can flourish in this country, and it’s time to start building

I’m retiring as a player now, but the thing that drove the best moments of my career is still there, pushing me to what's next. Teammates from 2012, like Rhian Wilkinson, Karina LeBlanc, Robyn Gayle, Melissa Tancredi, Carmelina Moscato,  Kaylyn Kyle and more, inspire me by what they are accomplishing after their competitive careers. I’m joining them now in that journey – I’ll get my MBA this year as a first step, and I plan to help Canada build its women’s soccer landscape.

Matheson, top centre, with her Canadian national teammates after the roster for the 2015 FIFA Women's World Cup was announced. (Darryl Dyck/Canadian Press)

So stayed tuned, because there is more to come. I want a kid from Canada to wear the uniform of their hometown team, and hear the anthem play before kickoff at a women’s professional match on home soil. I want to see that flag rise.