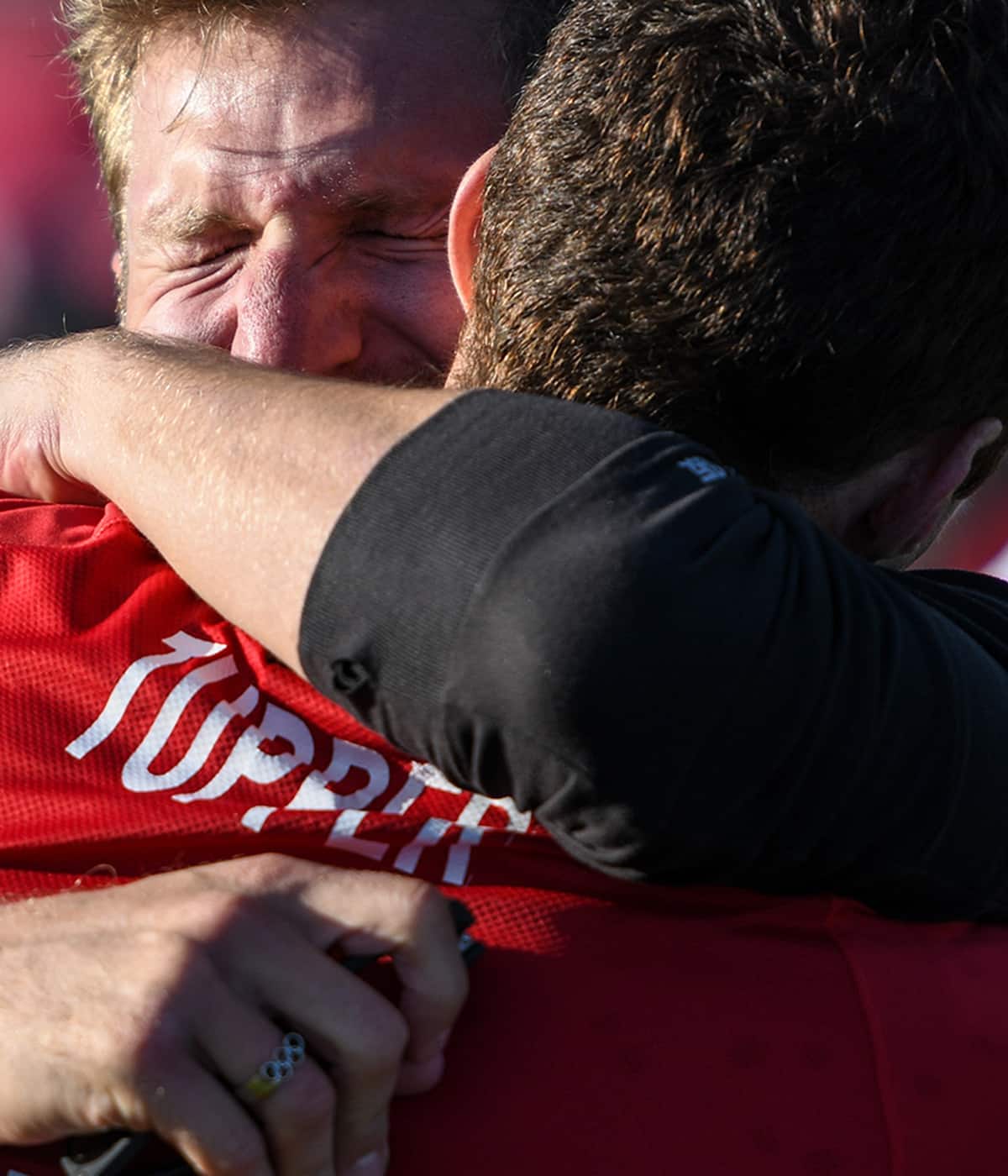 Cheers and caribous: On the sideline for field hockey’s finest hour

This is what our team is about.

Call me biased,  but when you consider the dearth of professional sport success in this city of late, and the gravity of the moment,  I’m just going to go ahead and put that quote out there.

You want drama, you want controversy, you want clutch goal scoring, you want world class saves, you want pitch invasions?  This game had it all.

Before I dive in though, some background for those less familiar with Canada’s Other Hockey. Field Hockey is the third most popular team sport in the world.  In my mind it is the perfect marriage of Canada’s better known sports, balancing the stick skills and hand-eye coordination of Ice Hockey with the 11-a-side tactics and fitness of Soccer.  India’s national sport is extremely popular in Western Europe and across the Commonwealth, and ever since the 1976 Montreal Olympics, when our sport moved off grass to an artificial surface, the play has only gotten faster and faster.

The mighty Red Caribou, Canada’s Men’s National Field Hockey Team,  has never medalled at the highest level, but we have a proud history of punching above our weight, and we consistently qualify for the biggest events, the Olympics and World Cup.  This is never an easy task, and this Olympic cycle,  after losing to Argentina in the Pan American Games Final, our first chance to qualify for Tokyo 2020,  we were left with a do-or-die  two game home series against Ireland .  Our final chance to earn a ticket to Japan.

An injury further complicated matters for me.  Early in the Pan Am final match I went down with an achilles rupture. The tears flowed hard that evening in Lima, not only because of my injury, and the team loss, but because I suddenly realized that my participation in the sport, with the team I love so much was in serious jeopardy. I was going to be stuck on the sidelines, watching and praying the boys could get it done, and give me one more chance to suit up in the Red and White.

We are two spots ahead of them in the World rankings, but Ireland has been a bit of a bogey team for us. We lost critical games to them at the World League event in San Diego and the Rio Olympics. Like us, their team is a mix of experienced campaigners and young studs.  They would come in feeling confident after a robust series of preparation matches.

Ireland came out firing in the first match at Rutledge Field in West Vancouver, the cultural home of our sport in Canada. There is a real west coast bias for our sport,  and with so many friends, family and alumni around to watch, plus the rarity of us playing pressure matches at home,  I think nerves got to the boys a little in game one.  We were facing an even steeper mountain, down two goals heading into game two the next day.

I still felt confident when the teams lined up for the National Anthems, with the early Autumn sun beating down I knew the boys were going to leave it all out there. Three years of anticipation, preparation and expectation, forever marching towards that chance to experience Olympic glory.  The players were facing the flag and singing, but I could hear the crowd singing behind me, loud and strong.  Looking across the field at the stands, I saw red and white hair, faces and clothing, and two thousand mouths open wide singing together. There was magic in the air.

From the first minute, a sea of red was pressuring the green backfield. The Irish were under fire from all sides. It was corner after corner for us.  When Gordie Johnston finally broke the tension and ripped a flick low and off the backboard I punched the sky and let out a massive yell, “F**ing Rights Boys – Let’s Go!”  But the Irish held firm and entering the second half we were still down by two.

It took a little more Gordie magic to get us within one as he put a beautiful backhand cross on the stick of Ollie who calmly deflected it home.  One more to go! We piled on the pressure but things looked further out of reach when one of the Irish strikers broke free in the last quarter and rounded Goalkeeper Antoni Kinder before firing a low backhand shot.  It looked like Antoni had no chance but somehow he sprung himself horizontally, picked the shot out of the air with his stick and deflected it wide. To this day I’m not sure how he managed to get there.

What came next was one of the most dramatic finishes I have ever witnessed. Twenty seconds to go in the game and the Irish had the ball in our corner, killing time, still up by one. My heart was in my throat. It was hard for me to watch.  I sensed the impending doom.  But our team never quits and when the Irish turned the ball over we fired a couple of quick passes upfield to the stick of young Jamie Wallace running the baseline.  The Irish defender sensed danger and lunged in desperation, tripping Jamie awkwardly as time expired. The ref blew the final whistle and I held my breath.

The Irish bench erupted in celebration.  I knew we still had a chance, as our forward group signaled for a video review. Every heart-pounding second ticked slower while the video umpire carefully reviewed the tackle before announcing his decision – “Penalty Stroke!”  The Irish bench cleared the field.  Captain Tupper slowly made his way forward, with a chance to tie the game and send it to a shootout. Showing composure like Alex Honnold on El Capitan,  he stepped up and buried his stroke low and to the left of the goalie.

The shootout mirrored our Rio 2016 Qualification win against New Zealand.  The agony of going down early, 3-1. The stress of watching the world’s best shootout goalie, David Carter go to work and make the absolute must saves. The clutch shooting of Adam Froese. When Froese’s goal crossed the line I threw up my crutches, launching them high into the air.  I hopped as fast as I could across the field towards a growing mob of Canadian Shirts.

Tears flowed down my cheeks as I reached Paul Wettlaufer, my old teammate from the 2008 Olympics, who had joined the on-field celebration. He hugged me and I hugged back. The next ten minutes was a complete blur but I remember hugging and kissing my teammates, family and friends. I called my girlfriend. I held my nephew.

This is the beauty of sport. This is what our team is about. The Olympics are a dream no more. They are  reality.  And we couldn’t have been happier to do it in front of the community that has supported us for so long.