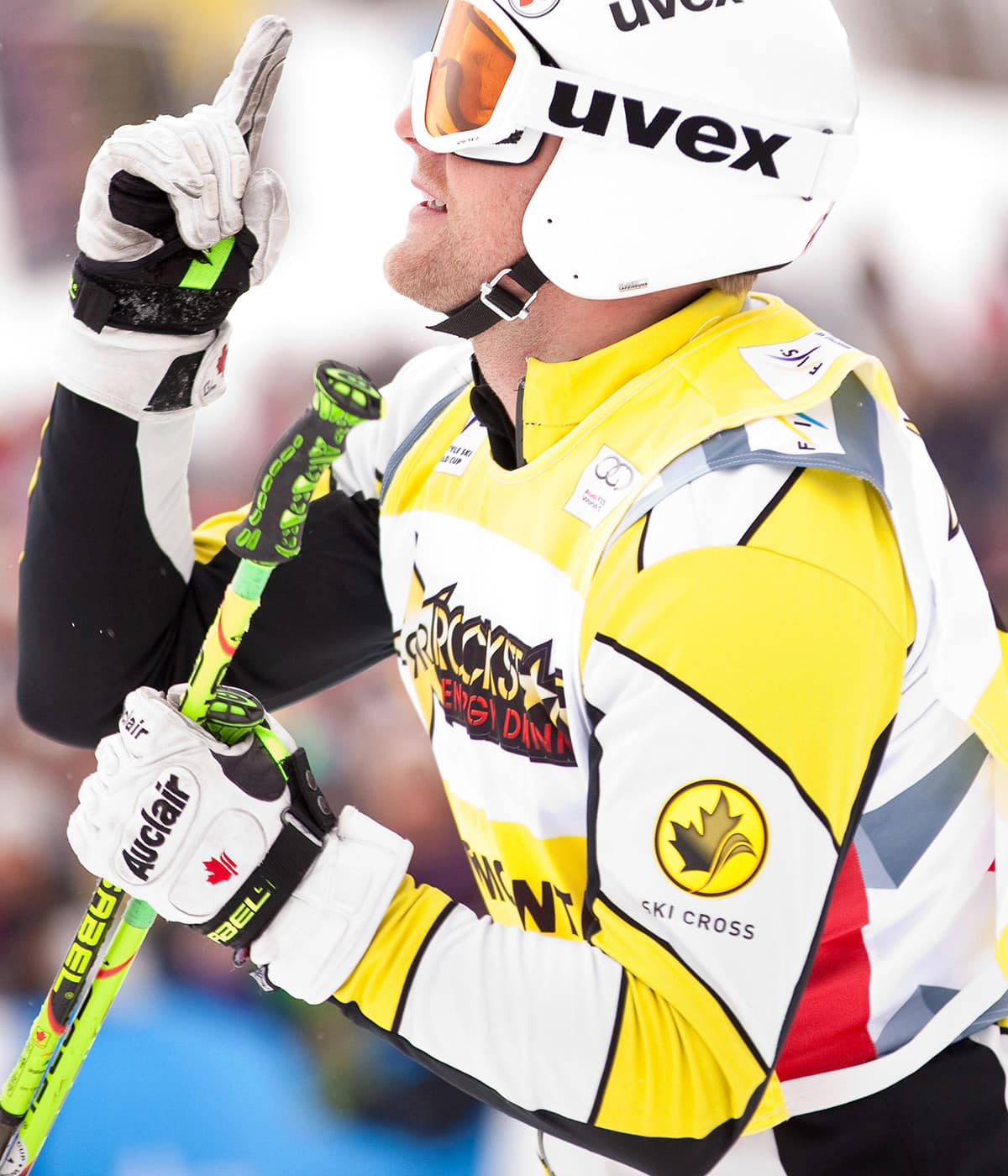 'If you find a way to chalk up setbacks to things like bad luck, how can you ever expect to learn?' says 2016 X Games champion

You make your own luck.

It’s right up there with the most overused sports clichés of all time, including “there’s no I in team” and “give it 110 per cent.”

For Brady Leman, left, the race down the hill is always a hard-fought battle. (Mark Blinch/Canadian Press)

It’s a saying that we have all heard or had said to us at some point in our lives, whether on the sports field or not. It probably only registered as another one of those things coaches say between periods, and most of us would have brushed it off and focused on other aspects of the game.

That’s definitely how it was for me the first 100 or so times I heard “make your own luck.” But the deeper I get into my career in one of the most unpredictable sports out there, the truer that old saying seems to ring.

Ski cross is a version of roller derby that has somehow landed in the Winter Olympics. Four skiers, one course, made up of man-made terrain feature, including but not limited to: banked turns, roller packs and 50-plus metre gap jumps. First one to the bottom wins. That’s a bit of an oversimplification but you get the idea.

Take the usual level of ski sport variability; weather, wind, snow conditions, visibility etc., multiply by four athletes trying to occupy the space of one, and you end up with the unpredictable, intense, and incredibly spectator-friendly sport of ski cross.

Dealing with the things that are outside of my control has been one of the most difficult aspects my sports career. Injuries resulting from collisions with other athletes, another racer crashing in front of me and ending my day, poor visibility, ending up in a heat stacked up against three teammates.

And that has to be one of the most frequently asked questions. How do you deal with the unpredictable nature of ski cross?

Make your own luck.

To me, the saying means control everything that you can control, and do it to the absolute best of your ability. I find it comes rather naturally. I go after every aspect of my training with a thoroughness that I believe gives me my edge: on and off the hill, with physical and mental preparation, studying video, making a race plan with the coaches, taking control of it all and using those tools to make my own luck.

Make my start faster, get out ahead of trouble, have a plan if I am in second, third or fourth, and home in my reactions to pounce on opportunities and react to what is going on around me.

But that’s all the easy part; those are the things that you are supposed to do as an athlete. They go hand in hand with another one of those sports clichés, “give 110 per cent.” The goal, after all, is Olympic gold, something you don’t earn by coasting, or with just your average 100-per cent effort.

The hard part is the flipside of it all: finding a way to personally take responsibility for those seemingly uncontrollable aspects of the sport. Tangled in the first turn? Start faster. Poor visibility? Rely on your feel. Three vs. one in an Olympic final? Focus on yourself and your own race, not on your competitors.

It’s easy in theory and incredibly difficult in practice, to place the blame on yourself and not on others. It’s in our nature to deflect, and look outward for someone or something else to take the onus for our misfortune. It’s easier, and less personal, but especially in a sport like ski cross, it doesn’t leave you much opportunity for growth. If you find a way to chalk up setbacks to things like bad luck, how can you ever expect to learn from these events, your fault or not? Take what you can from them, figure out what was in your control that could have changed it and make sure it doesn’t happen again.

At the 2010 Vancouver Olympics I broke my leg the day before my race. Four years later in Sochi, Russia I finished fourth. Neither of those results were what I had in mind when I left the start gate, and each was a crushing defeat. The best way I have found to move on from these failures is to take on the mindset: what could I have done better? How could I have made my own good luck? No worrying about bad luck. No sitting around wondering, “why me?”

This didn’t happen overnight. It was a long road to get this perspective and it’s something I constantly struggle with, especially after poor performances. But I do my best to remind myself that there was always something that I could have changed that would have improved the outcome. That next time I will be ready for it, and I know I will put the work in after each failure, big or small, and do everything I can to make sure it doesn’t happen again.

Throughout the last few seasons, this approach has led me to some amazing success, and it sets the stage for a big season and a lot of pressure heading into February and the 2018 Winter Olympics.

The Olympics offer one race in a season full of World Cup events. One really, REALLY important race, but it’s still just one race.

I will approach it like any other event, with the thoroughness, intensity and awareness I have honed over the past few years in World Cup. I will draw on all of my past failures, using them, instead of fearing them.

I’ll put all of that together with a will to win that I’m sure is second to none, and make my own damn good luck come Feb. 21.