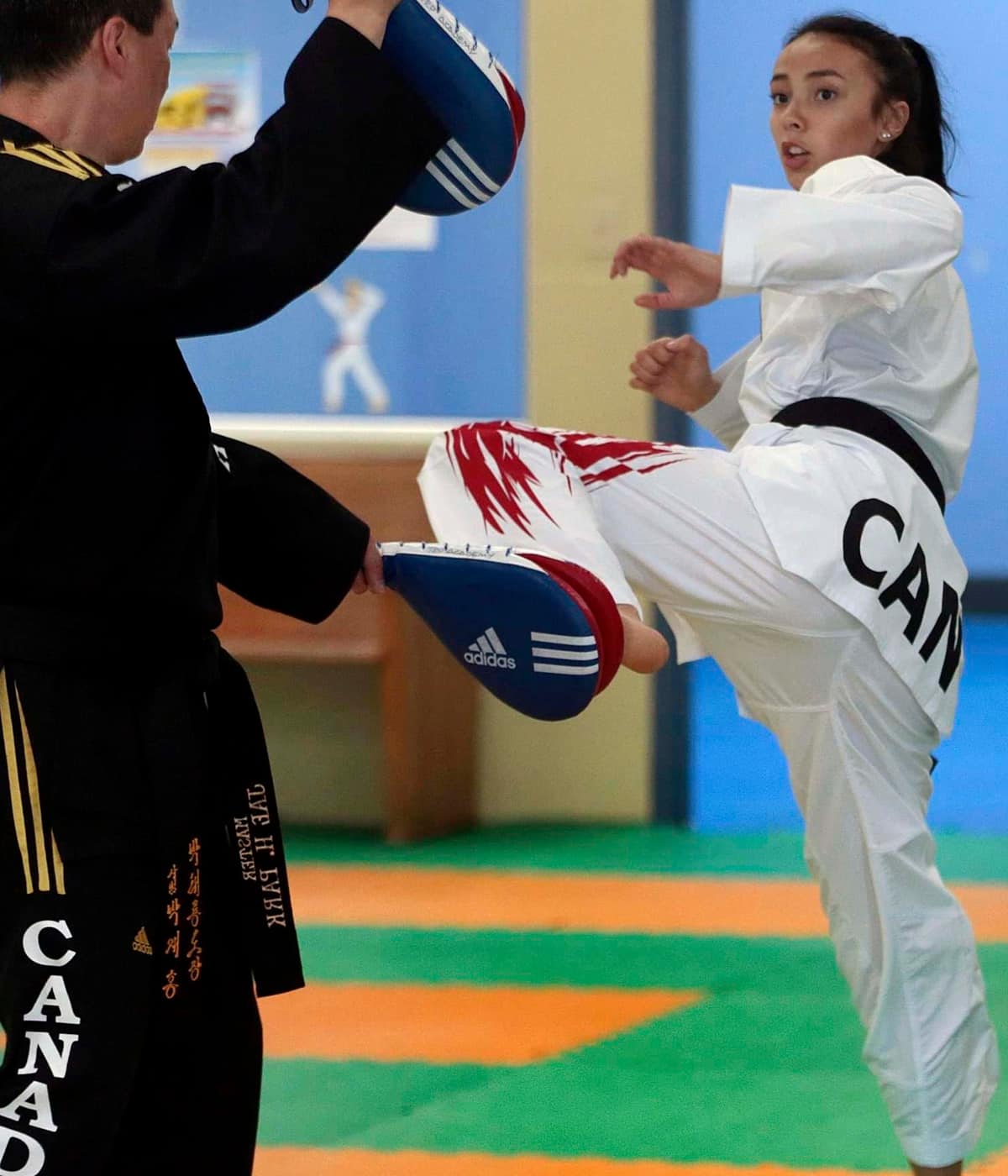 Born to wear the black belt

Skylar Park has lived and breathed Taekwondo her entire life. Shortly after the Canadian Olympian delivered this piece to Player’s OwnVoice, she followed up to say: As athletes, we are used to adapting, used to being strong and performing in times of uncertainty. Sport has taught me that even in the darkest times, there is a light at the end of the tunnel. This time we are in is no different. We train day in and day out not for the good days but so we are prepared for the worst:

Not many people find their calling at the age of seven. For me, I was literally born into it.

I was born into a family of 16 black belts. My grandfather is a grand master, my father and mother are masters and my coaches, both my brothers and all 10 cousins are black belts, and yes, my aunts and uncles are also black belts.

Skylar Park, front row, right, is happy to be one of the many black belt holders in her family. (photo submitted by author)

In 1977, in hopes of a better future, my grandparents packed up the lives of their family of six in Daegu, South Korea and immigrated to Winnipeg, the place we now all call home. In 1993, my dad and my grandpa opened the doors to the Tae Ryong Park Academy, my family’s business and the Taekwondo school I train at to this day. The school, Tae Ryong Park, is named after my great-grandfather.

I grew up in a family where practicing Taekwondo was just what we did on a daily basis, where achieving your black belt was not a lofty goal, but something you were expected to accomplish as a life skill. This was our normal.

It is fair to say that Skylar Park developed an early taste for Taekwondo. (photo submitted by author)

The academy was a meeting place for my entire family and I think that’s why I loved Taekwondo so much from the very beginning. I spent every day surrounded by everyone I loved, but at the time, I didn’t realize how special it was. I didn’t understand that it wouldn’t last forever, that we would all grow up, some would move on and some would move away. That never crossed my mind, maybe because I was young, or maybe because I just knew that I would always still be there. Why would I ever want to leave?

The Academy has always been my second home, if not my first. I started Taekwondo crawling around on the mats, imitating the kicks of my older cousins, holding onto anything that I could find. I first put on my pads and stepped onto the competition mats when I was just three years old. Back then, there were no other three to five year olds who competed, so I took my lumps and bruises from older girls and boys. This did not discourage me from competing, just the opposite. I wanted to beat the older kids and stand on top of the podium. I have the same desire to this day!

Framed by her cousins, Skylar Park, center, made the family academy her second home. (photo submitted by author)

April 14th, 2007, I finally joined the club. I achieved my black belt alongside my best friend and older cousin, Samantha. I was seven years old at the time, but it felt like I had been working for it my whole life. Little did I know this was just the beginning of my journey.

That same year I competed in my first National Championships in Saint John, New Brunswick. I won gold, my first of 14 National Titles. Jump ahead to 2016, the Junior World Championships in Burnaby, BC. I have always loved performing for large crowds. I was confident. Maybe it was naivety, but I believed that I would stand on top of the podium, my first World Championships. It was my first time competing against the best junior athletes in the world, but I went in with the belief that I would come out on top. I had no idea who I would be fighting but that didn’t matter to me. I had full belief in who I was and what I could do.

I became Junior World Champion and MVP on home soil, with my family and teammates in the crowd. I will never forget walking into the arena for the finals, with a roaring crowd, spotting my grandpa sitting among my teammates, cheering me on. I was not only representing my country, but also my family, the people who believed in me from the beginning, the ones who taught me everything I know.

The four years following that win have been a whirl of highs and lows. I made the Grand Prix circuit and my first Senior World Championship team in 2017. I was unsure where I fit in, unsure if I belonged. I was fighting the world’s best Taekwondo athletes. A young girl and her dad from Winnipeg against the world, was what it felt like at times. Although I won many international events that year, I was not satisfied, I wanted to win a medal at the World Championships, or at a Grand Prix Series. I knew I was capable of more, but I just did not have that same confidence. Instead of trusting in my training and believing in myself, I thought I needed more. Because other athletes/nations had entourages, coaches and support staff at every single event, I thought I could not compete against them… just me and my dad.

Skylar Park celebrates the win that qualified her for the Tokyo 2020 Olympics. (photo submitted by author)

Things started to turn around in 2018. I finally broke through and won my first Grand Prix medal in Rome. This was about the same time I started working with the Canadian Sport Centre Manitoba (CSCM) and began receiving support from CanFund. This gave me the sense that I had others around me who believed in me and who supported my dream.

I felt ready going into the 2019 season. I had all I needed. My team was growing. I had the support of the COC and OTP. I believed more in myself and the team around me. I was focused on one goal for the year, to direct-qualify for the Tokyo 2020 Olympic Games. Everything I did, every decision I made, was about making that dream into reality. I won two more medals at the Grand Prix and a bronze at the World Championships. Although I lost my semi-final fight at the last second to the 2 time Olympic gold medallist, I felt it. I belonged there. I believed in me!

Heading into 2020, I really appreciate the support team around me now. But most importantly, I realize that what I had from the beginning, my family, Team Park, was always enough to take on the best in the world. I believe and trust in what I have and what I am capable of again.


What I have is special. Not every athlete travels the world with their family by their side. Not every athlete has their dad as coach, their mom as manager and their brothers as training partners. I am lucky enough to have been coached by my dad since the very first day that I stepped onto the mats. Although at times it is hard to spend all day, every day with family, I wouldn’t have it any other way.

I am proud to say that Team Park is heading to Tokyo with full belief and sights set on the top of the podium.