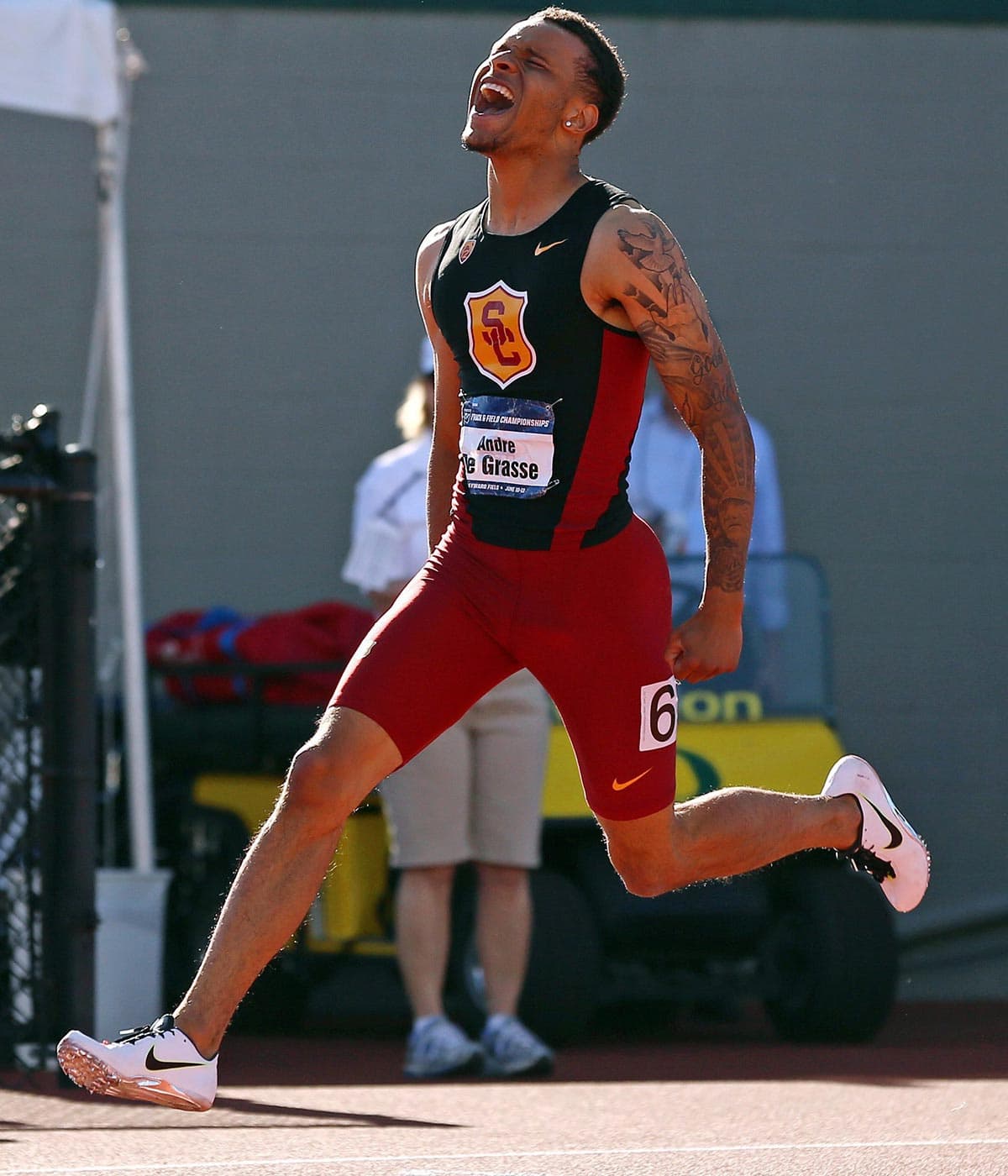 Andre De Grasse: What did I just do?

Andre De Grasse sent the track world into a tizzy after he swept the 100- and 200-metre events at the NCAA track and field championships in Eugene, Ore., on June 12. (Ryan Kang/Associated Press)

I’m so happy. I wasn’t even favoured to win at the NCAA track and field championships, but there was a handful of people in my corner that believed in me. I just went out there and did what my coach, Caryl Smith Gilbert, told me to, and it just happened.

I’ve got so much respect for all of my competitors. We’re all trying to win. Nothing personal — but I guess it was just my day.

On the morning of Friday, June 12, I only had about 600 followers on Instagram.

By Monday morning, I had almost 2,000 followers. My Twitter followers got boosted, too. The battery on my phone died so fast with all the notifications coming through. I still didn’t really understand what was going on.

By now, I’ve started to realize the significance of my recent performances. A lot of people that I don’t even know try to talk to me, and my Twitter and Instagram pages are full of praises and compliments that I didn’t really expect.

People care to know my name, even though they don’t say it right half the time. (It’s De Grass, not De Grassi). People wanting interviews, people interested in doing documentaries, interest from agents, people asking for autographs.

I did a media telephone conference the other day and a bunch of reporters called in to talk to me. Just me!

It’s a bit overwhelming at times, and kinda weird.

Don’t get me wrong, I grew up dreaming about being a sports star. Maybe not in track, but still: I’ve always wanted to be famous. Who doesn’t? Sometimes I have to pinch myself because this really feels like I’m in a dream.

It seems that everyone is pretty impressed by my performances and are inspired by what I have accomplished. It’s a great feeling. I can’t complain about that at all.

But I’m still a simple guy.

Everyone who knows me knows I’m generally a laid-back dude. I’m not the one that likes to put on a show other than within my races. I do my thing on the track, and after that, I’m chillin'.

I can’t say that I am totally prepared for all the cameras, interviews and questions.

Sometimes reporters ask me all these technical and historical questions about track and I don’t really know how to answer them because I am not a veteran in this sport.

I think I come across as uninformed sometimes because my stats would probably make people think that I’m a person who has dedicated most of his life to the sport, and knows everything that’s going on; history, statistics past and present, etc.

I’m not that guy.

It’s a little embarrassing at times. But I brought this on myself, I guess. And with the things coach Caryl believes I can do on the track, I can only assume my life is gonna get even crazier, especially with the Olympics coming up next year.

It’s something I’m going to have to get used to. It will probably take some time.

Some sprinters talk about how nervous they get when they compete. I don’t know — I’m still trying to figure out what everyone is so nervous about.

I feel that when I compete it’s “just me out there.” I am running for myself without any pressure. It’s not like basketball where I have a bunch of guys relying on me. Actually, the nerves I get during an interview could easily top the nerves from basketball and track combined. Lol!

To me, if I don’t perform on the track it’s on me, and that’s it. Maybe I just think about it in a weird way. This is all new to me, though. Maybe with time I’ll learn what there is to be nervous about?

De Grasse is driven to be “the man” one day, and hopefully become the successor to Jamaican legend Usain Bolt. (Alex Gallardo/Associated Press)

It seems like only yesterday that I was in Markham, Ont., playing basketball with my friends with no real care in the world.

Ball shorts and ball shoes were a regular part of the wardrobe — except in the winter, of course.  But when I really, really think about it… it feels like it was almost yesterday.

From crossing guys on the court through the brisk Toronto winters to finding myself at USC sprinting down my lane in the warm California sunshine, time has zoomed by.

A basketball scholarship would’ve been cool, would have been the first steps on my path towards the NBA, but apparently I’m too little. A five-foot-10-inch point guard is very rare at the highest level.

When Tony [Sharpe, my first coach] spotted me running in high school, I really was just doing it for fun. One of my friends had challenged me to a race that day and I beat him.

After that things started to change. I had no clue what was ahead of me. Tony knows a lot about track, and he explained to me what he noticed when he first saw me that day — but it’s a lot of technical stuff that I can’t say I totally get yet.

He was obviously on to something though, because I’ve had some decent success up to this point. I’m just going to continue to work harder and keep doing what my coaches tell me to do, and I believe things will fall in place.

On the track with the king

I remember being on the track last year at the Commonwealth Games in Glasgow. I ran the 200 metres out there and it was okay, but I didn’t make the final.

What sticks out in my head is running the 4x100-metre relay, and being on the track for the final with the Jamaicans. Specifically, being on he track and experiencing the energy of the stadium while being on the anchor leg with Usain Bolt.

I have never experienced that type of energy at a track event. Not even at NCAA’s. The anticipation of all of the fans waiting for Bolt to receive the baton and how much they enjoyed just looking at the dude, even when he wasn’t running.

Those fans were crazy. I was literally standing right next to him. Being in that moment gave me an even clearer vision of what I am dreaming of, which is me being “the man” one day. The great sprinter, Andre De Grasse of Canada….

I have big dreams, big goals and I am getting closer to them now. But I’m new to all of this, and I’m still learning. I’m hoping that my new fans understand this, and realize that though I have the stats of a veteran, I’m only 20 years old, and despite my numbers, I’m a rookie by default.

I’m learning how to be in the spotlight and how to handle the attention. I’m still learning about the sport and how to run. But this much is certain: I leave everything on the track so there are no regrets. I wear the Maple Leaf on my chest and do my family, friends and country proud.

With regards to being world and Olympic champion one day De Grasse, left, asks one simple question: Why not me? (Paul Chiasson/Canadian Press)

The day before I won the NCAA championships, my coaches sat down with me to watch film and told me a few simple words that had really stuck out to me: “Believe that YOU belong, nobody can run with you. THINK BIG!”

Later that night to boost my confidence even more, one of my friends gave me a very simple message: “Andre, why not you?”

So I ask myself…world champion? Olympic champion? Why not me?

I’ve come this far, and I’ve only scratched the surface. I want to keep it going.

Bear with me Canada. I still don’t think I really realize what I just did.