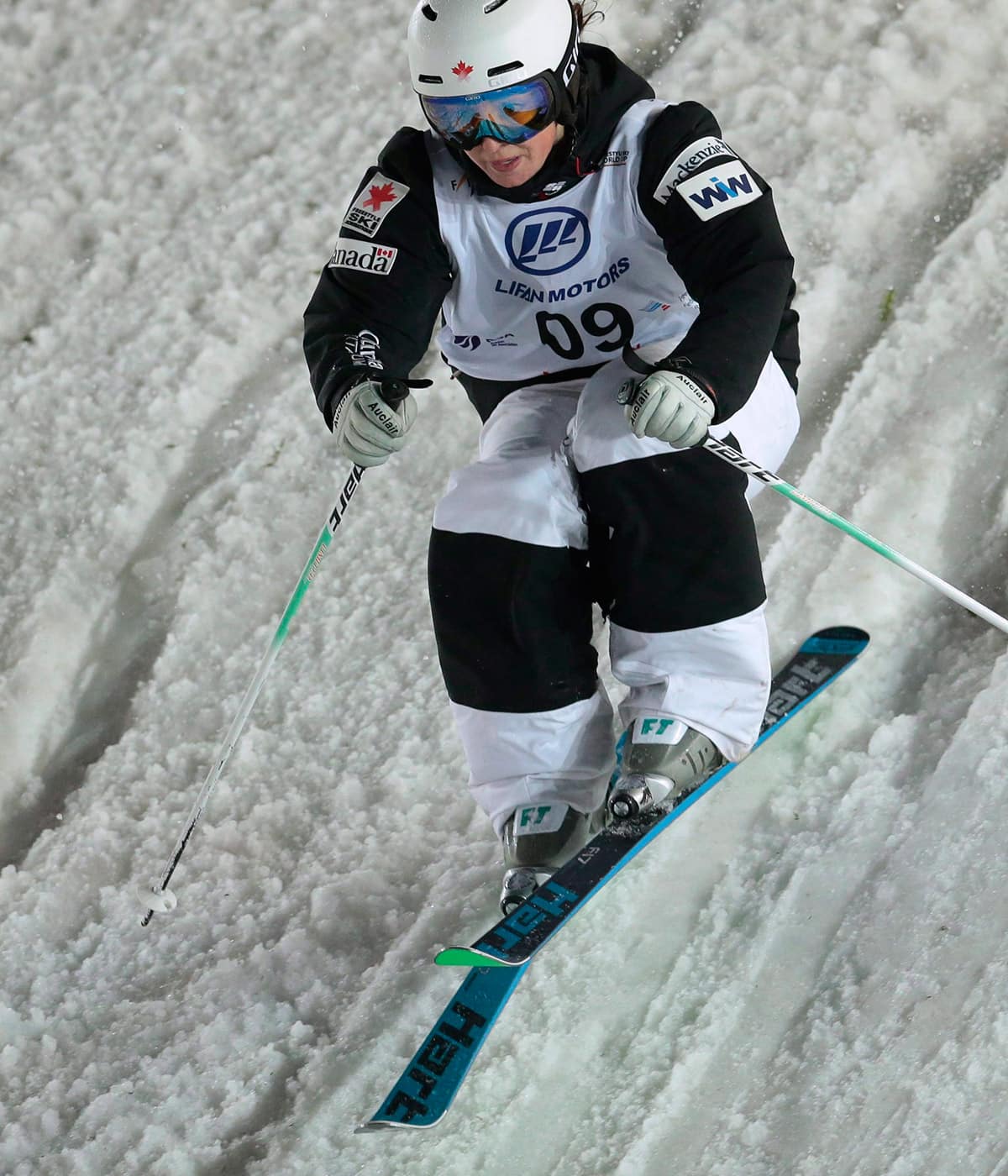 I woke up in a complete daze. Strapped to a plastic backboard and trapped in a suffocating neck brace, staring at the ceiling of a speeding Quebec ambulance.

This was definitely not in my game plan. My mind flooded with questions and concerns. Would I be able to compete again this season? Did I break my back? Do I have a concussion? And more importantly, when can I go pee? In fact, this last question was so pressing, that I kept repeating it.

Andi Naude has learned how to deal with crashes. (Jeff McIntosh/The Canadian Press)

Everyone thought that it was my concussion speaking, but what they did not realize was that I had been randomly selected for a drug test prior to my crash. I had been holding my bladder for hours in preparation for the test, and I was on the verge of exploding. Believe it or not, I even managed to set a new hospital bedpan filling record.

I came into the 2016-2017 competitive season with high hopes, confident that it would be my best season to date. After a fantastic off-season, filled with productive training, technical and mental gains, I arrived at the World Cup opener in Ruka, Finland with a confidence I had never experienced before.

I genuinely believed that if I stuck to the process, focused on what I could control, and skied to the best of my ability, I would be ranked up there with the best female mogul skiers in the world.

This new-found confidence was quickly whisked away, however, after a crash in my finals run left me in 16th position. It was not at all the start I had been hoping for, but it left me hungry for improvement. I did not know it yet, but a worse crash was yet to come.

With the help of my coaches, sports psychologist, and family, my confidence was quickly rebuilt. I was ready to tackle the remainder of the long season ahead. We came up with a game plan, and I was eager to follow through. That’s when I woke up in the ambulance. The wrench was thrown in the works during a short training camp in Val St. Come, Que.

A freak training accident, in the second week of January, also the largest crash in my life thus far, left both my body and ego incredibly bruised. Fortunately, I was able to walk away from the hospital with nothing more than a minor concussion, whiplash, and a few sore ribs.

With the season’s second World Cup only one week away, I had high hopes to return to competition. I desperately wanted to prove to myself that I was back in top form.

But again, my confidence was crushed by an average performance and poor result. In the moment I felt so immensely down, I didn’t even want to ski … what was the point if it was making me so upset? After a few deep breaths, some tears, and a lot of talking with my support team, I slowly started to rebuild. Again.

Overjoyed and relieved by the result, I knew that my hard work was finally paying off. Leading up to the event, I was trying to focus on what I knew I could do well, leaving no room for doubt. I  concentrated on the process; put emphasis on the actual skiing, and not so much on the result.

Although I have had the best season of my life, ranking fourth in the world after four podium finishes, it has not been a smooth, easy ride. There were plenty of challenging days where I struggled to be at my best. There were some competition runs where I made mistakes and left some doubt for the judges to penalize me.

I was battling a subliminal fear, or apprehension, stemming from my big crash at the beginning of the season. Even though I thought I was completely fine, I never trusted my bottom jumps. Normally I would have. This is just one of the aspects of my run that I look forward to fixing during the off-season. I have learned so much, especially from my mistakes. I cannot wait to grow from them.

Naude has endured painful obstacles on her way to the podium. (Ivan Sekretarev/The Associated Press)

I am not alone when it comes to battling adversity. And for perspective’s sake the challenges I have  overcome are nothing in comparison to others, both in and out of sport. Humans are incredibly resilient, forever overcoming adversity.

My time in sport has taught me that determination, perseverance and resilience are very much keys to success, both on and off the slopes. The path to the podium is not easy in any way, shape, or form, and it is filled with painful obstacles.

I cannot even recall the number of times I have found myself confronting one of these obstacles, wondering how to proceed. Standing up after taking a knock is something that I have become very familiar with. I believe this has made me a much stronger human being.