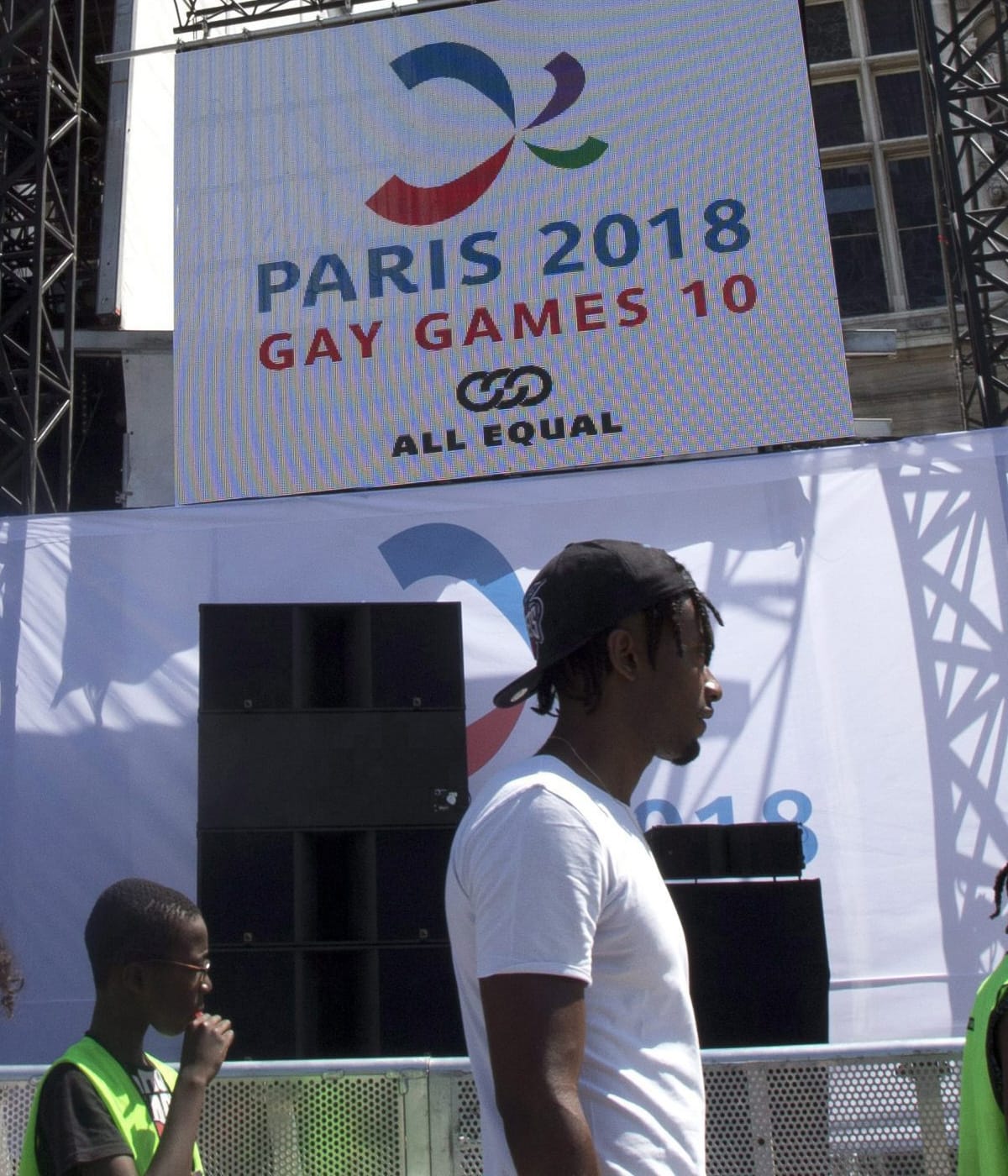 A vision of victory at the Gay Games

There is a table of three 60-something women, the most elegant women I have ever seen, all with effortlessly styled, regal gray hair, meticulously manicured outfits, head to toe Yves Saint Laurent and Chanel.

Between sips of white wine and long drags of their slim cigarettes, I can faintly hear their Parisian discussion, and as one looks up at me she proudly affirms she recognizes our accent and that we are in fact “un equipe Canadien.” I am a bit nervous, is this rude or not classy? Are we interrupting their sophisticated afternoon on this busy side street in the troisieme arondissement? We are 15 water polo players, but easily sound like a group three times that size.

Exhausted but exultant, we are celebrating five days of hard-fought competition, and the final result, a victory in the competitive water polo division at the Gay Games. We are proudly displaying our medals, and recalling in perfect detail, every goal, every block, every miss, every save, and each of us keeps adding more details, and we get louder and louder the more we recall, and the more champagne bottles we empty. But I look over to the table and the French Vogue cover girls are smiling and enjoying watching our party. This is it, this is what it’s all about, we worked so hard for so many years, and now is the celebration.

From an early age, I’ve been taught to visualize the outcome in sport, so I am hoping this visualization pays off. I would gladly substitute the Vogue ladies for a handsome group of single gay men, but the rest needs to be exactly as I’ve visualized. I know the feeling of accomplishment at the end of an international water polo tournament. I’ve been going to these competitions for eight years now, and I want that elation again, that tension between excitement and tiredness.

You are so filled with emotion you could burst; pride, accomplishment, connectedness with my teammates, we just battled and we won, together. It’s the memory of the high that keeps you motivated and practising and coming back every year to these games. I want that in Paris — at the Gay Games, and especially with this team, this will be the highest of the highs.

As I’m visualizing and remembering these feelings from past tournaments, I reflect on playing sports as a kid in Ottawa. I was in everything growing up. Hockey, soccer, baseball, karate, but even in victory, I never had the feeling I get now with my water polo team. I remember sitting in the 1994 maroon Dodge Caravan, teammates Jaime and David are talking at me, debating who on my shirt is the better hockey player. I’m wearing a white sweater, with three Toronto Maple Leafs portraits on the front.

“Obviously it’s Wendel Clark, he is the best in the league.” Jaime asserts. David disagrees, he thinks Doug Gilmour rules, and I agree — not because I believe it, but because I think it will take the heat off me for a bit, I will fit in and seem like I’m caring about this stuff, when really I’m just dreading this next hour of being freezing cold, having to keep up appearances, pretending I like hockey, and that I care how many assists Wendel Clark has.

But I dress the part and I pass by and fit in because I have heard this debate 100 times at home; my brothers and my dad will talk about goals, assists, penalty minutes, trades, starting lines, yada yada yada, with such enthusiasm that I have picked up some headlines, and I know that Dave Andreychuk is not the best guy on my sweatshirt, and my brother  the Doug Gilmour fan always seems to have a better argument...

As a kid, something was missing. I never had that elation when I was winning. I loved to practise, compete, and win, but it wasn’t the same feeling. I wasn’t able to really be myself with my teammates and competitors. I could keep up with the athletics, but not the appearances. I didn’t fully participate and love those sports until I grew out of that sweater.

Skip ahead 15 years to 2013 and I’m in Belgium to compete in the water polo tournament. It is there that I first realized I was competing and I was being myself. I didn’t have to fake appearances, I didn’t have to pretend. I could socialize with my team, and every other team, and it was so liberating. I had no apprehensions. We joked, we laughed, we talked about the tournament and we talked about Lady Gaga, and there was nothing wrong with that.

These were my people. The gays. The gays and our allies. The gays and our allies that loved sports and competition. I met friends from the U.S., Belgium, England, Australia, and France. Friends from volleyball, rowing, athletics, swimming, and of course, water polo. I even met a special Dutch rower, we will call him Pieter, oh Pieter. Belgium, for me was mostly about finding my community, and people that I fit in with and belong with. It’s where I learned that it is ok to be gay, and it is ok to like sports and competition. But I admit, I was too overwhelmed with this new, international social network, that I maybe put too much focus on the social activities and Pieter, than I did on my performance.

A few years later in Edmonton, I got to see all my friends from around the world again, and travel with my Toronto Triggerfish team. I still have that comfortable feeling of being myself, but I have improved my water polo game over these past few years, and now I am on the competitive team, so the balance has shifted. Edmonton is more about performing in the pool, less about the partying. We have a real shot at winning this, the International Gay and Lesbian Aquatics tournament, and I am hungry for that rollercoaster high.

The Canadian water polo team gets more confident with every match. (Submitted by Paddy Murphy)

On the final day of competition I’m excited because we’ve made it to the big show, I have been playing well, and our team is performing at its best. But I want it to last. Our coach gives us the pep talk, reminds us of our focus and I can feel the energy of the group. We are so close. Everyone feels the same, you can see excitement, you can see fear, and we all just need to focus. We’ve termed it pintensity, patience and intensity — our secret sauce.

The focus pays off towards the end of the third quarter. We have had a great game, and we are pulling away from the other team. You can feel their panic and frustration as the clock counts down, and our “pintensity” only gets stronger. I start to have all those feelings, elation, out of body, bursting with emotion. Then, our coach is in the pool with us, fully clothed and we are all so happy, relieved, excited and the 15 of us are all trying to hug one another while still in the pool. This rollercoaster high is going to last a long time.

Today, I’m in Paris, older and wiser. We are getting ready to start our journey through the Gay Games, and I want it all this time. I’m hungry for that winning feeling, and I want to experience the euphoria of victory with my team, my triggerfish family, my community, and I want to celebrate and socialize, all while being comfortable with who I am, at the premier tournament of LGBT sport, the 2018 Gay Games in Paris.

I hope a week from now, I’m raising a glass to those Vogue ladies as we celebrate our win, and I can keep that high for even longer this time.

Q: The best book you've ever read?
A: Kane and Abel by Jeffrey Archer.

Q: Best advice you ever received?
A: Learn from mistakes and move on quickly. Don't let one mistake become two.

Q: If your life was a movie, what would it be called?
A: 100% all natural paddy. Organic, unfiltered.

Q: What word or phrase do you overuse?
A: Amazing.

Q: What is a skill you wish you had?
A: Singing.

Q: What's something no one would guess about you?
A: I used to be, and still somewhat am, A Reba McEntire super fan.

Q: If you could have the ultimate influential dinner party, who are the six people you'd invite?
A: Hilary Clinton, Jack Ma, Oprah, Tina Fey, Margaret Atwood, The Queen.

Q: What makes you cry, every time?
A: "Thank You Mom" commercials for the Olympics. I'm crying right now.

Q: What's the next goal you want to accomplish?
A: ? I want to landscape my backyard before winter.