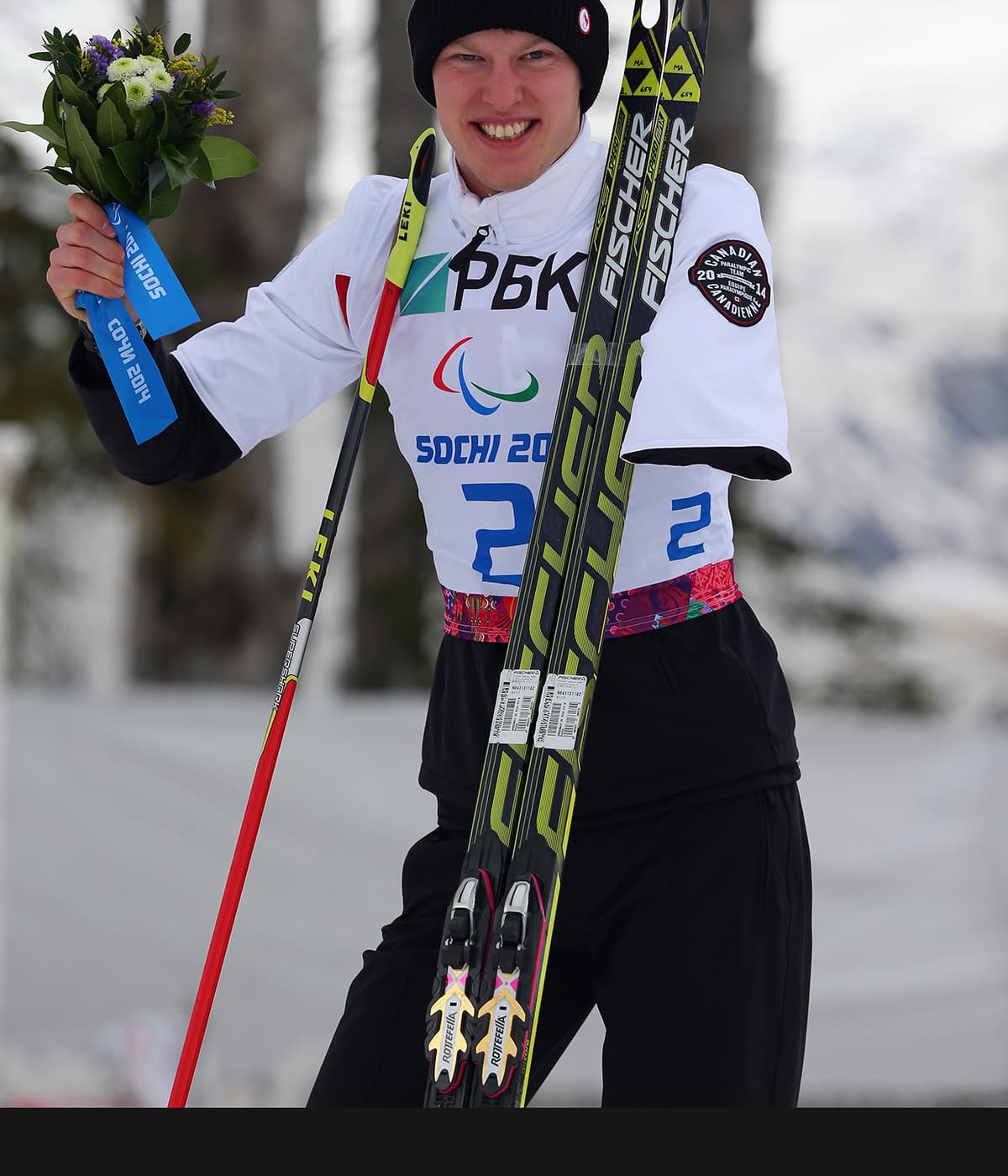 'Sport has given me a way to push the limits of what is possible,' says Canadian para-biathlon star

Thousands of spectators in near silence, holding their breath in unison, waiting for the squeeze of a trigger.

Erupting into a deafening roar as black targets change to white. That is a feeling very few will ever experience, but it is the thrill of being a biathlete.

As Mark Arendz points out, a single stray bullet can be the difference between winning and losing. (Hannah Peters/Getty Images)

Biathlon: a sport where distance  is measured in kilometres but success by less than a millimetre. You may have skied the last 14 km in the fastest time, but victory  will be judged by whether a single bullet has gone astray by less than one millimetre. It is a sport filled with contradictions, and therein lies the challenge.

To consistently succeed in biathlon, you need to master the infinitely variable intersection of high-performance nordic skiing and marksmanship.

Two very opposing sports challenge an athlete’s whole being - heart, body, and mind. It is the challenge of balancing every minute detail that has made me fall in love with this sport.

I grew up searching for the next challenge, wanting to prove something more. This addiction, if you will, continues to  shape my life in ways I still don’t fully understand.

It started with the oldest and most fundamental challenge of all: survival! On the sunny summer afternoon of Aug. 19, 1997, I experienced a life-altering moment. I was helping my father on the family farm in P.E.I. , and noticed some grain wasn’t flowing into an auger properly. At the age of seven, my first instinct was to help — by pushing the grain into the auger. As I did this, I lost my balance.

To prevent my fall, I shot out both hands. While my right landed safely, my left went straight through the shields. In an instant the auger had caught and entangled my arm, pulling me in up to my shoulder. Pinned and unable to move, I had but one choice: accept the challenge to survive.

The grain truck driver quickly and courageously put himself in harm's way to stop the auger. The driver then told my younger brother, who was nearby in the yard (but luckily hadn’t seen the accident, yet) to find my father. A few minutes later my father arrived.

At first, my father tried to pull me out, but I was too entangled for that to work. The only option was to reverse the entire auger to untangle my arm. The moment I was free of the auger blades, my brother and I hopped into the family truck, while my father quickly wrote a note for my mother.

Knowing it would take too long for an ambulance to arrive, my father drove me to the hospital himself. He pushed our little Ford Ranger to it limits that day, probably halving the usual 30-minute drive to the hospital.

I was awake and alert for all of this. The last thing I remembered was my father lifting me out of the truck at the hospital. As he carried me through the waiting area, I looked up and read the emergency sign above the door. I remember reading that sign out loud in my mind. Then, darkness!

Over the next few hours, I sporadically awoke for a few moments at a time before blacking out again. I was airlifted to the IWK Children’s Hospital in Halifax that evening. That night, the surgeons attempted to repair as much of the arm as they could, but ultimately had to amputate my left arm just above the elbow.

When I woke up in the late morning of Aug. 20th, I first saw my mother, upset but relieved to see me awake. Next, I look down at my left arm. This is where my next obstacle would begin. In my mind, I could still feel my arm. With the bandages being so thick, I believed that the doctors had fixed my arm and had needed to fold it double and placed it in a cast. As I was only seven years old, my imagination was that doctors could do anything.

My mother then told me the truth; that I didn’t have a left arm anymore. I didn’t believe her at first. It wasn’t until a week after the accident that the nurses came in to change the dressings that I saw the stump that remained of my left arm for the first time. Little did I know, but I now believe, that moment right then is when a spark went off. A spark that ignited my willingness to accept the challenges to come and my vow to overcome them.

A spark that has now grown to an inferno. It’s what drives me to achieve more, accomplish greater things and push harder, but mostly importantly to show others my abilities, not my disability.

I couldn’t just jump to a goal of becoming a Paralympic champion. There were years of setbacks to overcome first. In the early days, those challenges sometimes seemed overwhelming. Every small task, I had to relearn. How to hold a bowl of soup or cereal from sliding across the table. How to hold and cut anything on a dinner plate. The near-automatic motions of zipping up a jacket had suddenly become a significant effort for me.

One of the greatest obstacles I had to overcome was learning to tie my shoelaces. I struggled with this one for a long time. It was the most frustrating daily task I had to take on. I was trying to figure out a way to do it. But I didn’t even know where to start or what I was capable of. Then I found my motivation to figure it out. At a War Amps Champ seminar, I watched a little girl in a pink dress tie her shoes. A few days after that, I forced myself to find a way, and I did.

Sport for me was like therapy, a way to satisfy that hunger, to push myself further. Success in sport itself is a challenge, but I was searching for an even greater meaning. I can’t and couldn’t live without sport. I refused to let my one arm be an excuse for not competing. The practise I had from overcoming the little daily tasks — try buttoning up a shirt with one hand or opening a can of tomato sauce — prepared me to overcome even greater obstacles on the field of play. That spark drove me to try harder, to find the bigger challenge in sport. I was out there to prove that I was as capable as anyone else. I knew that I had limits, but I wanted others to see that a disability is what you make of it.

A tragic beginning ignited my drive to overcome all obstacles. Sport has given me a way to push the limits of what is possible. Success fuels my desire to accept any obstacle and overcome it.

Success, like that which I achieved last month at the para-nordic ski world championships. In addition to earning five medals, I was crowned world champion in two biathlon events. This success only makes the spark burn brighter.

I have found my ultimate challenge — and it is biathlon.