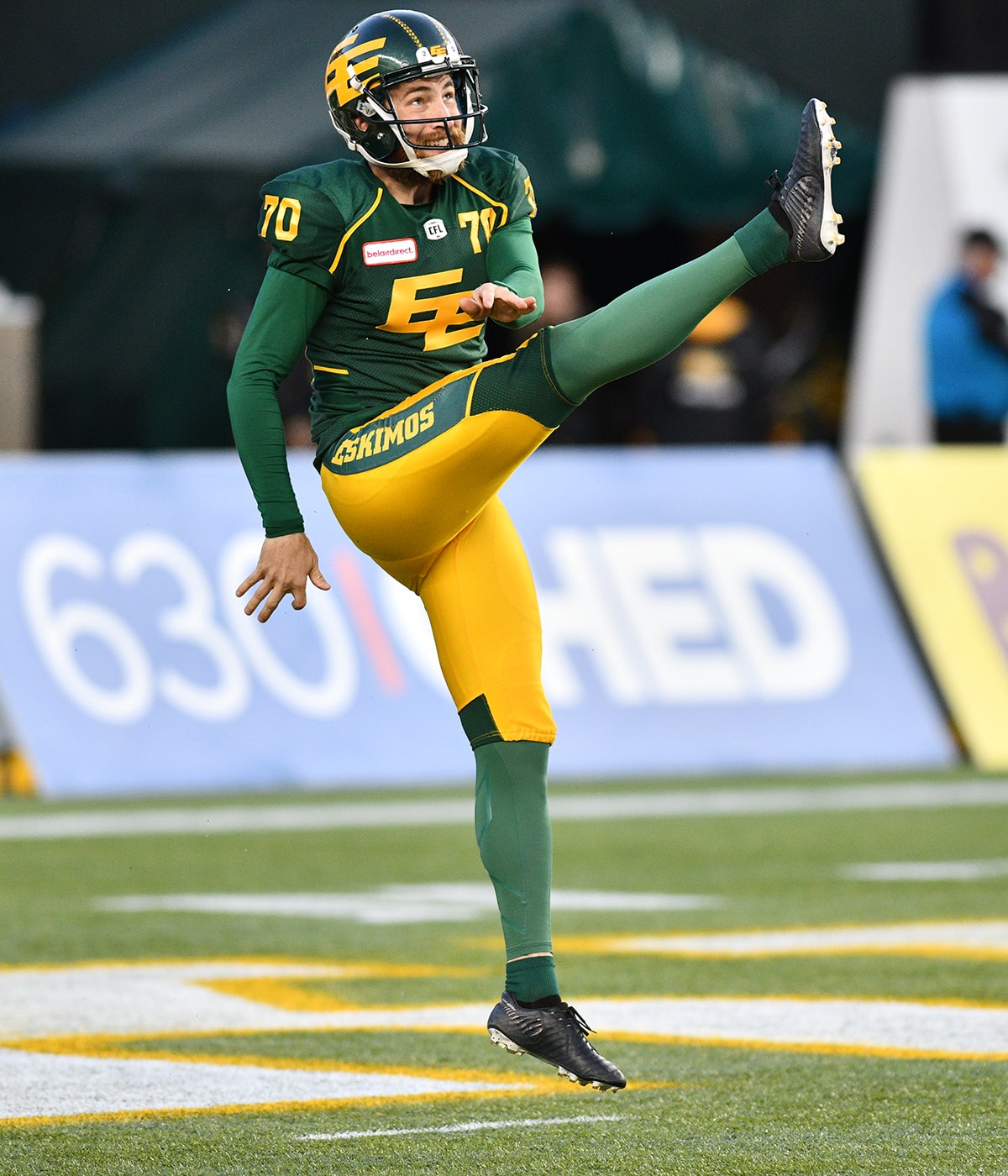 20 years of kicking, and the dream is real

'Years of lonely practice had prepared me... when the Eskimos called, my career finally took hold.'

I can remember the moment when I kicked my first football.

I was six years old, and my mom took me to an Edmonton Eskimos event at the Agricom convention centre. There were a bunch of different activities set up for kids to try. They had a little turf square with a set of uprights, so kids could try to kick field goals. I remember the cheap orange plastic kick off tee they had in place, the kind you’d get in a package with a football and a pump. I remember the little football.

It would be a while before I kicked footballs again… but I was playing soccer at that age, and I had already developed a reputation as a kid who could kick the ball pretty hard. I remember my first soccer tryout, in the Kinsmen fieldhouse. I gave the poor goalie a bloody nose. I went on to make that team. A couple of years down the road, my best friends on the soccer team were also playing football, and I was able to convince my parents to let me sign up, too.

Hugh O'Neill, left, with his high school league MVP trophy, as a kicker and linebacker. (Submitted by Hugh O'Neill)

I landed my first kicking gig at the age of ten. The West Edmonton Raiders peewee football team. I remember being surprised at one of my first games, when I kicked a convert and our team was awarded two points, because at that age not many kids were kicking field goals. I was playing other positions at the time as well as kicking, and so my dad and I usually stayed after practice to work on kicking specifically, because the main practice was devoted to team drills, offence or defence.

I’m not sure why I was so taken with kicking at that young age. It must have helped that I was just naturally good at it, and I liked being better than most players. I always had a competitive edge. And, whatever sport I took up, my dad wanted to be right in there, helping me practice, and nurturing the athlete in me. We’d go early to Eskimo games, so we could watch the kickers warm up, and see what they did. All the way through high school, he biked to meet me on the field to help me practice my kicking.

I also developed into a half decent linebacker during those early years, and I loved playing both positions. Although, as a kicker, I didn’t love the running involved after every touchdown. I would have to trot down to the five yard line, kick the convert, run back to the bench, grab the kick off tee, run back on the field to kick off, run down and cover the kick, then back to get the kickoff tee again to throw it to the sideline, then run down the field once again to get in the huddle and relay the call from the sideline. In my senior year, I led the league in points scored (through field goals) and tackles, and I was the league MVP, and our school won the city championship. I went on to play for team Alberta in the Canada Cup, (which we won), and this was also when I started to realize my kicking talents might exceed my linebacker abilities. I played both positions, but there were nine other linebackers in the mix, and the coaches were reluctant to put me in as linebacker and risk injuring their only kicker in the process.

I decided to stay at home and accept a scholarship from the University of Alberta. At 17 years old I was the starting kicker and punter. The previous kicker had been thrown off the team for stealing from other teammates, so the expectations were set low for me in my first year. I was accepted as both linebacker and kicker, but once again, as the only kicker, coaches were wary about injuries. I started the season with the linebackers, doing my kicking at the end of practice. As the year went on, I left my linebacker crew earlier and earlier each practice to work on kicking. That would be the last season in which I wasn’t a full time specialist. I was fortunate to find a great coach in Glenn Harper, who volunteered his time to help me out once or twice a week and on game days. He was a CFL punter for a number of years and he helped me refine my technique and mental approach to the game.

I think it’s the mental aspect that separates kicking from all other roles on the field. Other positions are very reactionary, responses to action in the game that cause them to make a split second decision to throw the ball, make a catch, a tackle, cut a certain way. As kicker, you have all the time in the world to think about what’s going to happen and what you’re going to do. Ask other athletes, they’ll tell you, lots of thinking time is not necessarily helpful. You have to be mentally sharp to not get in your own way. If you hit a bad kick, you might have 20 minutes or more to think about it before you get a chance to redeem yourself. That is plenty of time to really dwell on problems. Kickers and punters need such strong mindsets. To avoid having one kick affect the next, you have to be able to analyze from a distance.

When I first came into the CFL, I was a kicker and a punter. I had success doing both in University. I began strongly in my first preseason CFL games, field goal-wise, but after a couple of bad misses, I struggled to regain my confidence. When it came to place kicking, previous kicks would affect next attempts, and I’d often have to dig myself out of a hole with early misses in games. When I was confident in my swing I had no issues, but once the confidence slipped with a miss, I would pull my head up as soon as I hit my next one, not confident in where the ball was heading. Field goal kickers have to be extra sharp. A miss there costs points. A missed punt generally costs you field position, or at worst a touchdown for the opponents, but you have other guys to help cover your miss. Field goal kickers need that killer instinct, high confidence and ability to quickly forget a miss. Looking back, I have come to accept that wasn’t my strength at that time. I have dedicated time to working on bringing it to my punting game, to be aggressive about where I hit the ball, but my days as a field goal kicker have passed. I can focus my attention on punting and kicking off now, which I love. I find myself with the confidence I need to do my job effectively.

O'Neill was selected 11th overall by the B.C. Lions in the 2011 draft. (Darryl Dyck/The Canadian Press)

Becoming a kicker or punter at this level requires a whole lot of work when no one else is around. I had a natural talent for kicking, but it was all the pre- and post- practice work, when everyone else had left, that got me to this level. Thousands of kicks on an empty field. It’s not easy to challenge yourself when no one else is around, but that’s what you have to do to improve at kicking. Kick three balls, run over and pick them up, kick them back, and repeat. Let the work off the field become the success on the field.

It has taken me a long time to find success on the field. I missed a whole season with a knee injury in 2016 and I had to wrestle with questions about continuing to chase my dream. But years of lonely practice had prepared me to keep working on my own to get back in the game. I was ready when the Eskimos called, and my career finally took hold, 20 years after I kicked that first football in the Agricom.

Q: The best book you've ever read?
A: Fear and Loathing in Las Vegas

Q: If your life was a movie, what would it be called?
A: Still Kickin'

Q: What word or phrase do you over use?
A: Swing up

Q: What is a skill you wish you had?
A: I'd like to be a better gardener

Q: What's something no one would guess about you?
A: My favourite movie is The Princess Bride

Q: What scares you?
A: Unreasonably sized spider

Q: What makes you cry, every time?
A: Weddings choke me up

Q: What's the next goal you want to accomplish?
A: Win a Grey Cup as an Eskimo