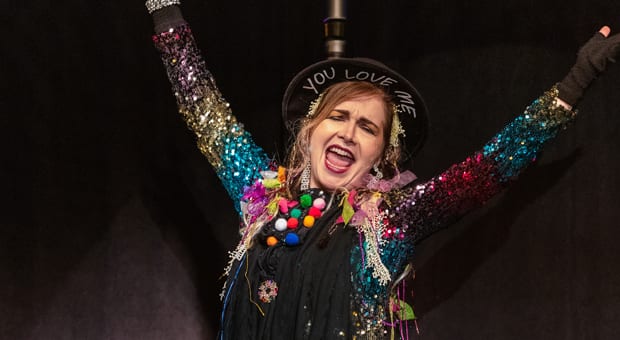 First, let me point out that this midlife Maritime single mom did not start 2019 expecting to become a drag performer.

Even in that magnificently motley crew, I was my own kind of spectacle, flashing out in a rainbow coat, shiny Doc Martens, braided hair festooned with ribbons and bows, a black felt hat and enough winged eyeliner to fly me to the freaky side of Venus.

Yep, that was the idea. My alter ego, JP Chameleon, is a silly, sequin-dipped homage to the 1983 version of Culture Club’s fabulous front man. JP will tumble 4 ya, miss you blind and karma your chameleon any day of the week.

Have an LGBTQ+ child? Read one parent's tips on taking them to their first pride here.

My unexpected adventure in androgyny started months before that drag show, when I heard a friend was organizing a lip sync contest.

“Lip sync is back?” I thought, smirking mischievously and knowing exactly what I was going to do. “OMG – I am so there.”

Rewind, for a moment, to 1982. I was watching Solid Gold on TV and Culture Club was introduced. I already loved their first hit Do You Really Want To Hurt Me but I had never seen the band perform.

I admit that when I first saw Boy George on the screen of that big living room TV, I was shocked and even slightly repulsed. After all, where would an adolescent girl in 1980s central Newfoundland ever see a man with eyeliner, arched eyebrows and a perfect lipstick pout? 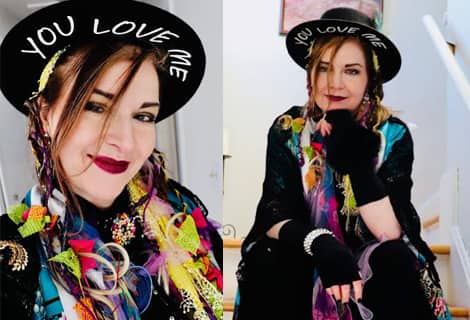 Weeks later, I was sunbathing in the backyard when a radio DJ said two Culture Club songs were coming up. In the July heat, I felt a delicious frisson of anticipation. I loved the music, and I could not deny that. At that moment, my young heart learned it’s not right to dismiss people because the way they look makes you uncomfortable.

Before long, I was over-the-top enchanted with Boy George. He was witty, wild and wonderful. And when the Karma Chameleon music video started appearing on TV a couple of times a week, just looking at George set off disco lights, purple fountains and rivers of gold in the pleasure centre of my brain.

I didn’t keep my new passion a secret at school, where kids were more likely to be into Metallica and Maiden. One week, I amused myself by wearing a different Boy George T-shirt to class every day. My quiet rebellion prompted the mean girl to hiss, “I wish she would stop wearing Boy George T-shirts!”

"I call it the benevolent exhibitionism of the human peacock."

Being crazy for the Boy taught me a lot about music, fashion and flawless eyeshadow. But it also opened my eyes to homophobia way before I knew it was a word.

I loved a male pop star who was effeminate and gay. And for that, I was ridiculed.

Undeterred, I dressed up like Boy George for the school Halloween dance and did all of his moves when Karma Chameleon played. Those four minutes and eight seconds were unadulterated bliss. And when I got home that night, I was on a kaleidoscopic, all-natural high.

Through imitating someone else, I was learning who I really was. Colour, eccentricity and creativity are oxygen to me, and to be happy I need to be harmlessly wild once in a while. I call it the benevolent exhibitionism of the human peacock.

My daughters, who were 15 and 12 at the time, are used to watching me sing, act in plays and dress in costumes. So, as we drove to the contest on a snowy Sunday afternoon, my gaudy getup wasn’t that big of a deal to them.

But when I finally performed in front of the crowd, the best part was seeing big, from-the-heart smiles of amusement — and possibly amazement — on my girls’ faces. I was making them laugh, but I was also showing them that no matter how old, tired, busy or broken-hearted you become, it is never too late to seize new challenges, put your ego on the line and flaunt your colours.

I was also telling them, in my own way, that no child or grandchild of mine will ever have to hide in a closet.

This mother’s love has no limits

In the end, I placed second in the contest, defeated by my kids’ father and his stunning, studded tribute to Gene Simmons from KISS. (I mean, how can I compete with actual fire breathing?)

But to my surprise, the story wasn’t over for JP Chameleon. I performed at a big fundraiser a few weeks later — and even a nightclub in early summer. And then, as I was sipping tea and surfing social media one evening, a surprise message arrived from one of the organizers of the Saint John Pride Drag Showcase.

Read about how the parents of drag kids are parenting here.

My 12-year-old heard me gasp. I told her what I had just read.

“That’s good,” she said emphatically. “You have to do that.”

And so, when August 9 finally came, I adjusted my sequined jacket and straightened my hat as I heard the showcase host introduce JP Chameleon. I leapt into the performance, strutting across the stage, winking at the crowd and shamelessly shaking my behind.

As the song ended, the audience cheered and clapped. I walked behind the stage, paused under the Bay of Fundy stars and spoke out loud to nobody but myself and the ocean air.

“Oh my,” I said, breathless with adrenaline and elation. “Now that could be addictive.”

In that moment, I felt wanted, welcomed and respected. I had never imagined I could be part of an event like that. My peacock feathers — both literal and figurative — were on full display, and people seemed to like me anyway.

To me, all of that was just about as beautiful as a rainbow. 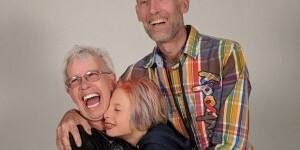 ‘We’re Not Child Abusers,’ Our 9- and 11-Year-Old Kids Are Just Having Fun Being Drag Queens Jennifer Power Scott is a writer, jazz singer, actor and mother living in Saint John, New Brunswick. After a glorious, music-filled childhood in Grand Falls-Windsor, Newfoundland, she earned a bachelor of journalism and master of journalism from Carleton University and spent eight years as a CBC reporter and producer. Her first book, Green Careers: You Can Make Money AND Save The Planet, is an inspiring, upbeat collection of stories for tweens and teens. She has written close to 20 features for Canadian Living magazine and was a finalist at the National Magazine Awards for her story on teen suicide. Jennifer has also written TV documentaries for Discovery Canada, W Network, Travel + Escape and Discovery Science. In her spare time, she loves caring for three parrots, driving her muscle car and dreaming up dance moves for her new drag characters. You can read more of her work at www.jenniferpowerscott.com.

‘We’re Not Child Abusers,’ Our 9- and 11-Year-Old Kids Are Just Having Fun Being Drag Queens