Centuries of Black migration on the Canadian Prairies

The Canadian Prairies saw their first Black residents more than 200 years ago. Today, the Prairies are home to the country’s fastest growing Black population.

Centuries of Black migration on the Canadian Prairies

The Canadian Prairies saw their first Black residents more than 200 years ago. Today, the Prairies are home to the country’s fastest growing Black population.

In the morning darkness, Ron Mapp makes himself tea as he prepares for his journey home. He says goodbye to his wife, then drives straight north out of Edmonton.

Mapp knows all the farms along his nearly-200-kilometre route to Amber Valley, Alta. There was a time when a trip across the Prairies could take you through all-Black communities, such as Amber Valley, Wildwood, Campsie or Breton in Alberta, or Maidstone in Saskatchewan.

Amber Valley was once the largest and most prosperous Black settlement in Western Canada. Mapp and former residents believe at its height, it had several hundred residents.

Over the years, the people moved to the cities for school or to work. Mapp himself left to pursue a career outside farming. Today, Amber Valley is a ghost town.

‘THE ERA OF COLONIST MIGRATION’

Mapp remembers happily playing with his younger uncles at his grandparents’ house.

“Life was beautiful in Amber Valley. Everyone knew everyone. It was very loving,” he says.

Mapp and his family have called the area home for more than a century. Exactly 110 years ago, his great-grandfather Rev. Henry Sneed led 194 African Americans to Amber Valley from the Deep Southern states of Oklahoma, Arkansas and Texas.

The Baptist minister had travelled thousands of kilometres the previous year to survey the Canadian Prairies and decided on northern Alberta as a new home. He carefully organized families from his church. They were determined to leave racial segregation in Jim Crow America to claim full citizenship in Canada.

In 1911, families loaded up freight cars with horses, mules, cattle and farming equipment for the trip north.

The Sneed party was wealthy and had farming know-how. Each family could buy a quarter-section of land, about 49 hectares, for $10.

“For African American farmers, the ability to move elsewhere, ideally beyond the reach of an American racial model, becomes very, very powerful,” Saje Mathieu, an associate professor of history at the University of Minnesota, said in a recent interview.

“It’s the era of colonist migration. This is when people are coming from all over the world. African Americans read the same newspapers and hear the same messages about homestead life.”

The Sneed party and other African American migrants who left their homes near the turn of the 20th century were exercising their political agency.

“It is a permanent migration. They’re making a politically informed decision to abandon any meaningful exercise of democracy when it comes to America,” Mathieu said.

Ron Mapp arrives in Amber Valley around 11 a.m. to the same vast open spaces that greeted Henry Sneed and his group in the spring of 1911.

Henry Sneed ensured that other families arrived before him and his group to Amber Valley in 1910. Sneed had scouted the area two years before the move and decided to make Amber Valley home.

The community built a schoolhouse in 1913 and a church in 1914. It had a widely known baseball team, a post office and a gas station. It also had prosperous farmers, even though farming in the area was not easy.

The Black Prairie settlers also documented their lives and unique contributions through writing, art and literature. Many have written significant memoirs.

Migration is an expression of freedom.

These Black settlers used their aspirations and ability to give themselves new beginnings. But as they sought new lives on the Prairies, the Canadian state simultaneously sought to control and limit their ability to do so.

In August 1911, five months after Sneed’s party arrived in Alberta, efforts to stop Black migration to the country culminated in Canadian Prime Minister Wilfrid Laurier signing an order-in-council prohibiting for one year “the landing in Canada of any immigrant belonging to the Negro race, which is deemed unsuitable to the climate and requirements of Canada.”

The Canadian government deployed emissaries to the United States to dissuade Black people from immigrating north. Migration from the southern states dwindled in 1912.

“If the Canadian government wouldn’t have been so rotten, there would have been thousands of people who would be able to come,” Mapp says. “It’s painful. It doesn’t leave a good taste in your mouth when your country tells your people they don’t want them.”

The early 20th century was fraught with anti-Black migrant sentiments in the Canadian Prairies. Newspapers in farming towns fed hysteria with headlines about an “Invasion of Negroes” and “Negroes Swarming into Canada.”

“For many white people, the arrival of African migrants solidified and provided a centrifugal force for racism,” Mathieu said. “White people bound together around fear, around pathologizing Black presences.”

She noted that Henry Sneed was politically astute. He was prepared to face harassment from Canadian immigration officers when crossing the border at Emerson, Man. His party came prepared with doctors to prove their physical wellness and lawyers for legal advice.

“We came to this sunny Alberta … not as peons, not as a subject race. … We feel that our gentlemen and ladies are able to compete with the white ladies and gentlemen of this country,” Sneed was quoted saying in April 1911 in the Edmonton Capital newspaper.

“We crossed the boundary not asking for anything but loyal citizenship.”

Each member of the Sneed party brought $3,000 US. Mapp said his great grandfather had $10,000 at the time. According to Mapp, Sneed helped other families financially cross the border.

“Henry Sneed was a very smart man. Growing up in Texas and Oklahoma through Jim Crow and seeing the racial discrimination, he hoped his family wouldn’t have to endure the same hardship they had known growing up in the U.S.A.,” Mapp says.

“I am proud of him. He had the foresight and the fortitude to want a better life for his family and other families.”

Mapp’s son, Cliffton, feels the same pride. He grew up in Edmonton but spent many of his boyhood summers at his grandparents’ farm in Amber Valley.

“Knowing that my family [is among the first] to settle in Alberta is an honour,” Cliffton says.

He and his wife are raising two children who are sixth-generation Albertans.

“I am grateful for my ancestors,” Ron Mapp says.

The low winter sun shines brightly over Amber Valley as Ron Mapp carefully walks through deep snow toward the Jordan W. Murphy Cemetery. He is here to pay homage to his ancestor Henry Sneed.

Sneed was born in Texas in 1847, years before slavery was abolished in the United States. He died in Alberta in 1914. He married Elizabeth Jefferson, a Black Indigenous woman from Oklahoma.

“[Sneed’s] is an epic life story that shows the lengths people will go to for freedom and the challenges they’re willing to face for the promise of a better life,” said Jim Phillips, director of stamps at Canada Post.

“By telling the story of those who founded Amber Valley, we celebrate Black history and Canada’s history, and pay tribute to the remarkable power of the human spirit.”

Mapp says the stamp is “beautiful.”

The stamp depicts Henry Sneed standing tall, wearing a suit and a platform hat. He is portrayed next to Jordan W. Murphy, his young granddaughters, and midwife Amy Broady, famous for delivering children in the region.

“I’ve always been super proud of my heritage,” he says. “Both sides of my family are filled with brave men and women who came to Canada to give their children a chance at a better life.”

He says it’s time for the Black history of Alberta and the Prairies to play a much larger role in curricula in Alberta and across the country.

“It’s important for people to know. Black people have contributed a lot.”

BLACKNESS ON THE PRAIRIES

The Prairies have been constructed as a non-Black space in the Canadian imagination. Nothing can be further from the truth. Black people have lived in the region for at least 200 years.

Henry Sneed and his party were following a trail blazed more than 100 years before they set foot in Alberta.

Some arrived as early as 1790 “in the territories that we now think of as the Prairies. And of course, those territories were then and are still now Indigenous territories,” said Karina Vernon, an associate professor of English at the University of Toronto Scarborough.

From the beginning, Blackness was linked to criminality and transience in the Prairies.

“They are vilified, criminalized, pathologized from the very beginning. One of the first people the RCMP arrested is a Black person from central Alberta,” said history professor Saje Mathieu.

Mathieu’s research revealed an incident in 1908 during which six West Indian men were arrested upon arrival in Estevan, Sask. The Regina Leader-Post reported the incident in the following terms: “Six darkies were hauled up by Sergeant Lett before Magistrate Hastings yesterday for vagrancy.”

The men were not vagrants. They came to find work, Mathieu said.

The mayor of Estevan at the time publicly stated that the newcomers weren’t welcome. He said local women were afraid of the men.

That same year in Virden, a small border town in southwestern Manitoba, residents were upset by the presence of newly arrived Black migrants. The mayor told the new people they were not wanted and should leave.

In Edmonton, a petition denouncing what it called “Negro immigration” circulated in 1911. The petition was addressed to Prime Minister Laurier and spoke of an “alarming influx of Negro settlers.” Laurier would go on to sign his order-in-council that year.

Vernon said that on the Prairies, Black people’s hope for a better life always existed against a backdrop of racism, white apathy and indifference. She said the Black immigrants’ existence, creativity and persistence were acts of resistance.

“Through more than 200 years, Black people have arrived on the Canadian Prairies very hopeful that it will be a place of relative safety, of community, of possibility,” Vernon said.

“They’ve been in many ways disappointed to find that the anti-Black hostility that they might have been fleeing in different contexts is waiting for them on arrival.”

Vernon identified two other major waves of migration besides the fur trade and Sneed’s group from Oklahoma: a wave following the easing of racial restrictions in Canada in the 1960s and contemporary migration.

BLACK FUTURITIES ON THE PRAIRIES

As the sun sets, Ron Mapp phones his friend and mentee Issa Warou.

Warou, who lives in Toronto, is originally from Chad. The two men met in Chad during a work trip Mapp took to the Central African country.

Warou is planning to move to Calgary to pursue further studies in petroleum engineering.

“I want to be where you are,” Warou tells Mapp.

Mapp wants to carry on his great-grandfather’s legacy by welcoming Warou to Alberta.

“To be able to pass my knowledge makes me feel very good,” Mapp says.

This rapid growth is driven by immigration, mainly from African countries.

“Canada has given me a lot. I want to contribute to this country with what I know,” Warou says.

It’s evening when Mapp arrives back in Edmonton. The sun has given way to a bright waxing moon.

Mapp steps out of his truck and begins walking up the driveway.

“To be able to pass my knowledge makes me feel very good.”

Ron Mapp wants to carry on his great-grandfather’s legacy by welcoming others to Canada. 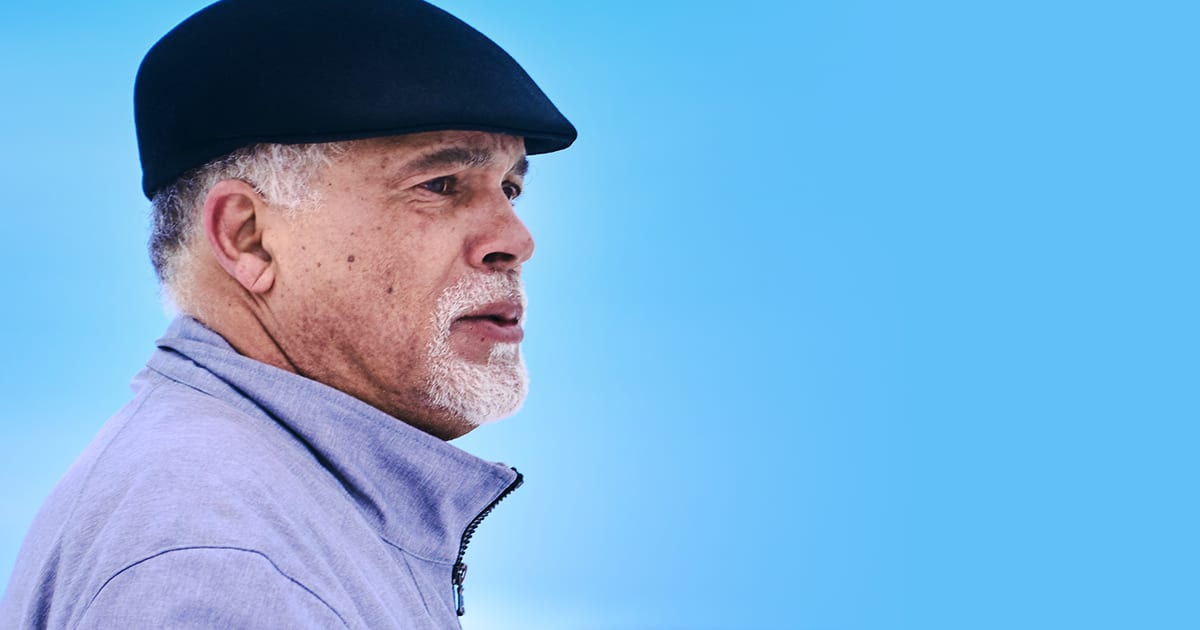 If you’ve enjoyed Crossing boundaries, please take a moment to share it. If you have thoughts you’d like to share with us, email BlackPrairies@cbc.ca. For more stories about the experiences of Black people across Canada, check out Being Black in Canada.