Thousands descended upon Paris for the fourth Saturday in a row, despite the government’s announcement it would cancel the fuel tax hikes that sparked the movement. 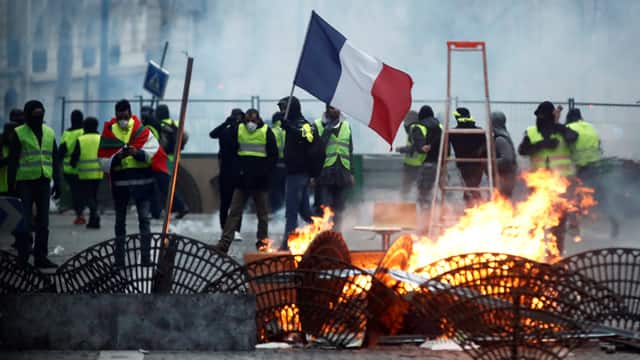 2 years ago
2:00
The CBC's Thomas Daigle is in the streets of Paris, where thousands of the so-called yellow vest demonstrators are clashing with police again. But despite the violence, there are fewer of those clashes compared to last weekend. 2:00

Some travelled by bus, others by train. Their list of demands is as long as it is varied.

But every member of the "yellow vest" protest movement who came to Paris on Saturday said they're fed up. Many say the cost of living has risen, while their wages have stagnated for years.

A range of taxes has them angry, but also a general feeling that Macron doesn't care about the working class. He slashed France's wealth tax and his critics see him as being more at ease with (and caring more about) Europe's elites than France's poor.

Feeling squeezed, they say demonstrating is the only way the French government will listen.

Thousands of the so-called "gilets jaunes" (named after the fluorescent vests every driver carries in the car) descended upon the capital for the fourth Saturday in a row, despite the government's announcement it would cancel the fuel tax hikes that sparked the movement.

Skirmishes and violence continued, but several demonstrators told CBC News they wanted to distance themselves from the troublemakers -- those the government considers "radicalized."

Here are some of the stories behind the vests.

'We have to be able to feed our families'

Jordan Fournier and Gregory Costard are both landscapers from Normandy, more than 200 kilometres away. They made the trip to Paris just for Saturday's demonstration.

"We're not lazy; we do want to get to work, but we have to be able to feed our families," said Fournier, a 26-year-old father of two.

In previous weeks, Fournier and Costard, 39, showed their support at one of the hundreds of roadblocks spread out across France. Demonstrators have been stopping traffic, particularly at roundabouts, as a way of protesting against the government.

"With the roadblocks, we just p**s off our compatriots more than anything else," Fournier said, so instead "we go to the capital, show that we're here and that we've had enough."

Sabine Bockstal, a 62-year-old retiree living in Paris, says she came with her family in mind.

Bockstal retired in July. "I couldn't stand working for nothing."

A mother of three and grandmother to 10 others, she blames government tax hikes for putting a squeeze on the working class.

"I can't treat my grandchildren," she said.

Unlike some in the yellow vest movement, she's not demanding President Emmanuel Macron resign, but rather he should "stop taxing us so much we can't live anymore."

'Financial death'  for the working class

Rémi, an auxiliary nurse, wore a blue cap emblazoned with the Gallic rooster, an unofficial national symbol of France.

He's demanding early elections to oust Macron after he says the president imposed "financial death" on the working class.

Rémi, who declined to give his last name, travelled 315 kilometres from his home in Dijon, along with 50 other protesters together on a train.

He says 40 of them were detained upon their arrival in the capital for carrying gas masks.

Macron 'should come down off his pedestal'

Chantal and Daniel both work in Nantes, about 400 kilometres away. After three weeks of watching the Paris protests from afar, they decided to come show their support in person.

Both declined to give their last names.

As taxi drivers, "if we want to work a lot, we can manage," Daniel said. "But there are less fortunate people who barely make minimum wage, full time."

Chantal described the president as "scornful."

"He should come down off his pedestal and talk to us," she said.

Macron did not make a public statement about the protests on Saturday.

He says he sees more and more people turning to food banks to be able to feed themselves.

"We're getting robbed," he said, in reference to growing financial pressure on the working class. "We can barely manage to have self-respect."

Lefebvre said the government hasn't received the movement's message yet.

He pointed to the thousands of yellow vests on Paris's Champs-Elysées avenue and a cloud of police tear gas wafting above the Arc de Triomphe on Saturday afternoon.

They "must have problems with their hearing or their vision."