Sally Yates, speaking publicly for the first time about concerns she brought to the Trump White House on Russia, told Congress on Monday she warned the new administration that Michael Flynn "essentially could be blackmailed" because he apparently had lied to his bosses about his contacts with the Russian ambassador.

Former acting attorney general Sally Yates, speaking publicly for the first time about concerns she brought to the Trump White House on Russia, told Congress on Monday she warned the new administration that National Security Adviser Michael Flynn "essentially could be blackmailed" because he apparently had lied to his bosses about his contacts with the Russian ambassador.

The statements from Yates, an Obama administration holdover, offered by far the most detailed account of the chain of events that led to Flynn's ouster from government in the first weeks of the Trump administration.

Yates, appearing before a Senate panel investigating Russian interference in the 2016 presidential election, described discussions with Trump White House Counsel Don McGahn in late January in which she warned that Flynn apparently had misled the administration about his communications with Sergey Kislyak, the Russian ambassador. 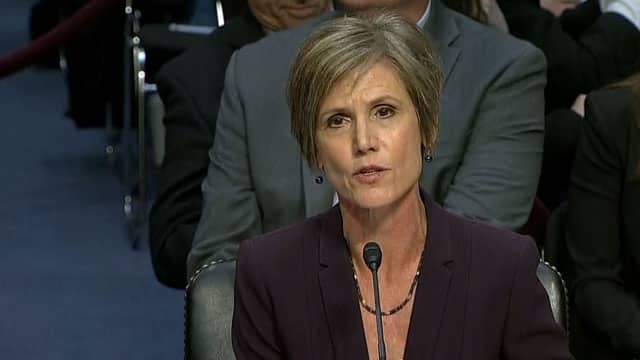 Yates to White House: Flynn 'could be blackmailed' by Russia

Yates said she was giving U.S. President Donald Trump's White House this information so that it could take actions it "deemed appropriate."

"We felt like it was critical that we get this information to the White House, in part because the vice-president was making false statements to the public and because we believed that Gen. Flynn was possibly compromised," Yates said.

"We knew that was not a good situation, which is why we wanted to let the White House know about it."

The highly anticipated hearing — it was Yates's first appearance on Capitol Hill since her firing in January — was expected to fill in basic details in the chain of events that led to the ouster of Michael Flynn, U.S. President Donald Trump's first national security adviser, in the early weeks of the administration.

The February resignation followed media reports that Flynn had discussed U.S.-imposed sanctions on Russia with Kislyak during the presidential transition period, which was contrary to the public representations of the White House.

White House officials had insisted that Flynn had not discussed U.S.-imposed sanctions with Kislyak during the presidential transition period, but asked Flynn to resign after news reports indicated he had misled them about the nature of the calls.

Also testifying Monday was former director of National Intelligence James Clapper, who said Russia is now "emboldened" to interfere in elections in the U.S. and around the world.

He told the subcommittee that Russia's meddling in last year's U.S. presidential election amounted to a "high-water mark" in its decades-long efforts to interfere in political contests. Clapper said he hopes Americans recognize the severity of the threat posed by Russia and that the U.S. moves to counter Moscow before it "further erodes the fabric of our democracy."

Clapper attracted attention for a March television interview in which he said that he had seen no evidence of collusion between the Trump campaign and Russia at the time he left government in January.

At the hearing, Clapper explained he retired the day Trump was inaugurated, and said that as a consequence, he was not aware of the counterintelligence investigation that FBI Director James Comey acknowledged during his March 20 testimony before the House intelligence committee.

Director Clapper reiterated what everybody, including the fake media already knows- there is "no evidence" of collusion w/ Russia and Trump.

Both Yates and Clapper said the U.S. needs to do more to respond to Russia's meddling.

Yates said the U.S. needs to do more to harden election systems and inform Americans about disinformation campaigns disguised as regular news reports. She also said it wouldn't hurt for the U.S. to prosecute some individuals for their roles in the interference in last year's election.

Clapper favours making U.S. election systems part of the nation's critical infrastructure, although he notes that many states have pushed back against the idea because they fear federal intervention in the electoral process.

He also said the U.S. has to do more to counter propaganda.

Obama told Trump he was 'not a fan' of Flynn

General Flynn was given the highest security clearance by the Obama Administration - but the Fake News seldom likes talking about that.

The warning came less than 48 hours after Trump's win in November, during a 90-minute meeting with Obama at the White House, according to both news organizations, which cited unnamed former Obama administration officials who spoke on condition of anonymity.

According to NBC, a senior Trump administration official acknowledged on Monday that Obama raised the issue of Flynn, saying the outgoing president made clear he was "not a fan."

Responding to a question over whether Obama voiced concerns over Trump's choice of Flynn for his national security adviser, White House spokesperson Sean Spicer said he would not disclose the details of the meeting.

Obama made it clear to Trump that he "wasn't exactly a fan" of Flynn, Spicer allowed.

In a second tweet, Trump said Yates should be asked under oath "if she knows how classified information got into the newspapers" soon after she raised concerns about Flynn with White House counsel McGahn on Jan. 26.

During Monday's hearing, Republican senators repeatedly pressed Yates on an unrelated matter — her refusal to defend the Trump administration's travel ban — and whether she was responsible for leaking classified information. She said she was not.

Trump has said he has no ties to Russia and isn't aware of any involvement by his aides in Moscow's interference in the election. He's dismissed FBI and congressional investigations into his campaign's possible ties to the election meddling as a "hoax" driven by Democrats bitter over losing the White House. He's also accused Obama officials of illegally leaking classified information about Flynn's contacts with Kislyak.

Yates' warning about Flynn in January capped weeks of building concern among top Obama officials, former officials told the AP. Obama himself that month told one of his closest advisers that the FBI, which by then had been investigating Trump associates' possible ties to Russia for about six months, seemed particularly focused on Flynn.

Yates, a longtime federal prosecutor and Obama administration holdover, was fired Jan. 31 by Trump after refusing to defend the administration's travel ban. She had been scheduled to appear in March before the House intelligence committee, but that hearing was cancelled.

The subcommittee meeting Monday is one of three congressional probes into the Russia interference, along with House and Senate intelligence panels. All the committees are led by Republicans.