As world leaders gathered virtually for the United Nations General Assembly on Tuesday, Russian president Vladimir Putin argued that ending "illegitimate sanctions" against countries like his could boost the coronavirus-hit global economy and create jobs.

As world leaders gathered virtually for the United Nations General Assembly on Tuesday, Russian president Vladimir Putin argued that ending "illegitimate sanctions" against countries like his could boost the coronavirus-hit global economy and create jobs.

During the UN's 75th anniversary gathering, the Russian president stressed the importance and need for multilateral co-operation in order to fight the pandemic and other global problems.

"Freeing world trade from barriers, bans, restrictions and illegitimate sanctions would be a great help in revitalizing global growth and reducing unemployment," he said to the annual gathering of world leaders, conducted virtually this year due to the coronavirus pandemic

Putin has been pushing for years to end U.S. and European Union sanctions imposed on Moscow after it annexed Crimea from Ukraine in 2014, was accused of interfering in the 2016 U.S. elections, and other actions. Moscow views the Crimea annexation as legitimate, and denies meddling in the vote that gave Donald Trump the U.S. presidency.

Russia has also drawn international criticism for speedily approving a COVID-19 vaccine, and some Western experts said it cut corners during testing. Putin has touted the vaccine on national television and said that one of his adult daughters had already been inoculated.

On on Tuesday, he offered to provide the vaccine free to all UN staff. However, both Russian and Western experts insist that further studies are needed to determine the vaccine's effectiveness and safety.

Putin continued to call for unity and urged countries to reaffirm their commitment to the UN charter and international law, lamenting a "deficit of humanity and kindness" between countries amid the pandemic.

He repeatedly stressed the Soviet Union's role in helping vanquish the Nazis in World War II — the conflict that gave birth to the United Nations. Despite calls for deep reform of the UN, Putin said the Security Council's five permanent members should keep their veto power, and said their leaders agreed to an in-person meeting once the pandemic allows.

"In an interconnected, interdependent world, in the whirlpool of international events, it is necessary to act together and rely on the principles of international law enshrined in the UN charter," he said.

Earlier, Chinese President Xi Jinping told delegates that Beijing has no intention of fighting "a Cold War or a hot one with any country," as tensions grow between China and the United States.

"We will continue to narrow differences and resolve disputes with others through dialogue and negotiation. We will not seek to develop only ourselves or engage in zero-sum game," Xi said in a pre-recorded video statement.

Long-simmering tensions between the U.S. and China hit their boiling point over the pandemic, spotlighting Beijing's bid for greater multilateral influence in a challenge to Washington's traditional leadership.

The coronavirus emerged in China late last year and Washington has accused Beijing of a lack of transparency that it says worsened the outbreak. China denies the U.S. assertions.

In what appeared to be a rebuke to U.S. President Donald Trump, though both leaders' speeches were pre-recorded, Xi called for a global response to the virus and giving the World Health Organization a leading role.

Xi's speech followed Trump telling the UN that it "must hold China accountable" for its actions related to the coronavirus pandemic.

"The Chinese government, and the World Health Organization, which is virtually controlled by China, falsely declared that there was no evidence of human-to-human transmission," Trump, who offered no evidence for his claim, said, also in a prerecorded message. 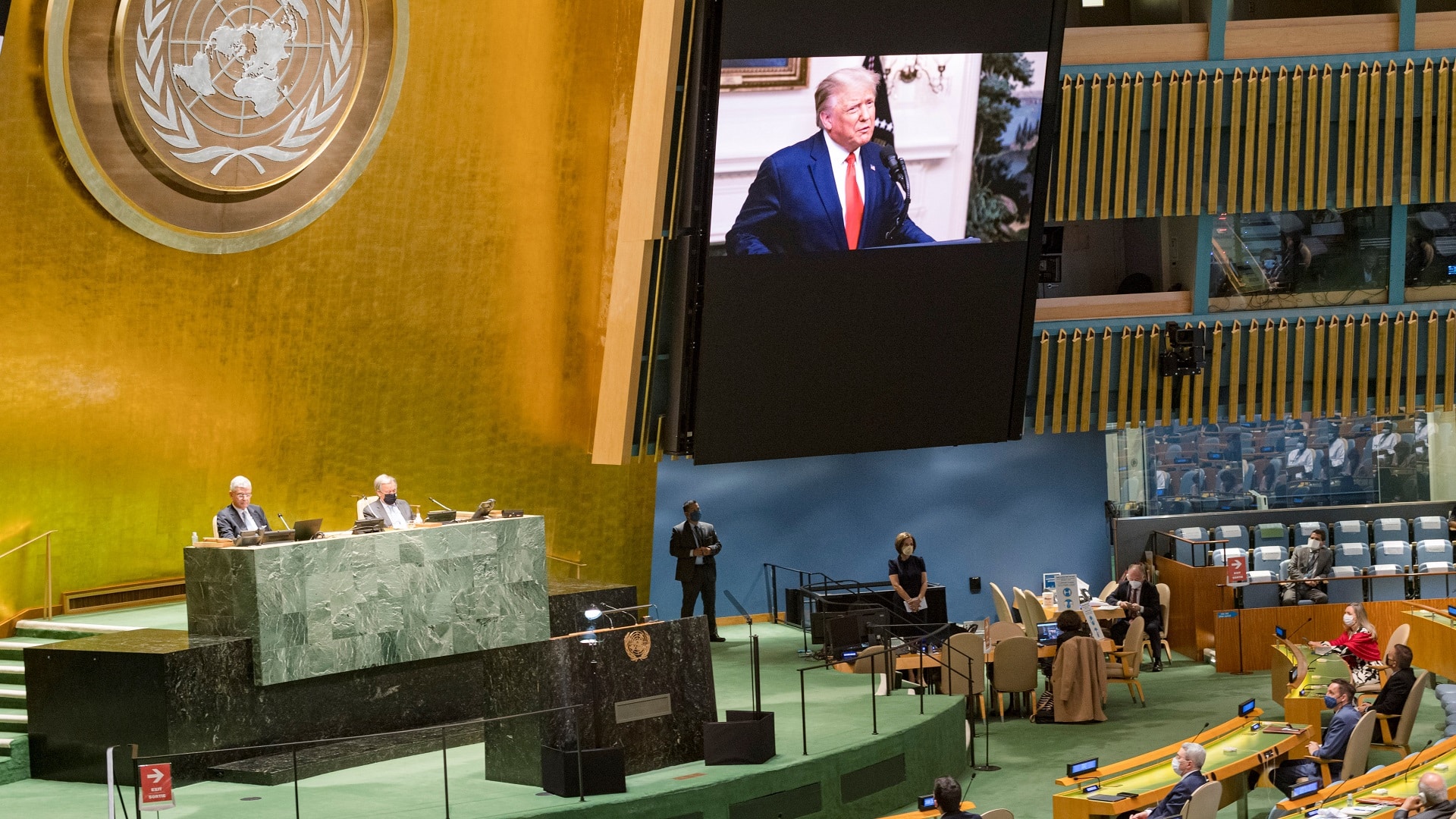 On Tuesday, the U.S. death toll from the coronavirus topped 200,000, a figure unimaginable eight months ago. Trump has been blamed for worsening the pandemic by ignoring the virus and obfuscating the nation's federal response to curb its spread.

The U.S. president promised to distribute a vaccine. "We will end the pandemic," he said, and enter a new era of prosperity, co-operation and peace.

Trump, a frequent critic of the UN, also said in the excerpts that if the organization is to be effective, it must focus on "the real problems of the world" like "terrorism, the oppression of women, forced labour, drug trafficking, human and sex trafficking, religious persecution, and the ethnic cleansing of religious minorities."

Speaking first, as is tradition for the Brazilian leader, Bolsonaro said that the South American nation has succeeded in boosting agricultural exports to feed a growing global population, which has made it a target.

"We are victims of one of the most brutal disinformation campaigns about the Amazon and the Pantanal wetlands," Bolsonaro said. "The Brazilian Amazon is well-known to be very rich. That explains why international institutions support such campaigns based on ulterior interests, joined by self-serving and unpatriotic Brazilian associations, with the objective of harming the government and Brazil itself."

Deforestation in Brazil's Amazon region may have reached a 14-year high in the 12 months through July, according to preliminary data published last month by the country's space agency. Final data will be released in coming months.

Fires also spiraled out of control in Brazil's Pantanal, the world's largest tropical wetlands, with the number of blazes surpassing 16,000 so far in 2020 — considerably more than any full year on record since 1998.

Bolsonaro came to office in 2019 promising to open more of the Amazon to development, such as farming and mining. International concern, particularly after last year's fires, has led investors to try to distance themselves from increasing deforestation and to pressure Bolsonaro's government to take more action against it.

Turkish President Recep Tayyip Erdogan said in his address that any COVID-19 vaccine should be universally available, regardless of where it is produced.

"No matter what country they are produced in, vaccines that are made ready to be administered should be presented to the common use of humanity," he said in a video address.

Erdogan also proposed a regional conference with all Mediterranean coastal states, including the breakaway Turkish Cypriots, to address tensions over maritime boundaries and hydrocarbon exploration in the region.

He said Turkey's primary preference was to solve disagreements "justly and in an appropriate way" through talks, but added that "futile" attempts to exclude Turkey from plans in the eastern Mediterranean could not succeed.

NATO members Turkey and Greece are at odds over rights to potential energy resources in the eastern Mediterranean and the extent of their continental shelves.

Tensions heated up last month when Turkey sent a seismic survey vessel to waters claimed by Greece and Cyprus, but they cooled a bit last week when Ankara recalled the ship in a move welcomed by Greece and the EU.

"I would like to reiterate our call to establish dialogue and co-operation with coastal states in the Mediterranean," Erdogan said. "So we are proposing the holding a regional conference where the rights and interests of all coastal states are taken into consideration, and where Turkish Cypriots are present, too."