Protests erupted in the U.S. state of Wisconsin after a video captured police shooting Jacob Blake, a Black man who was reportedly unarmed, in the back as he got in the driver's side of a vehicle. Blake was hospitalized and was in stable condition Monday. 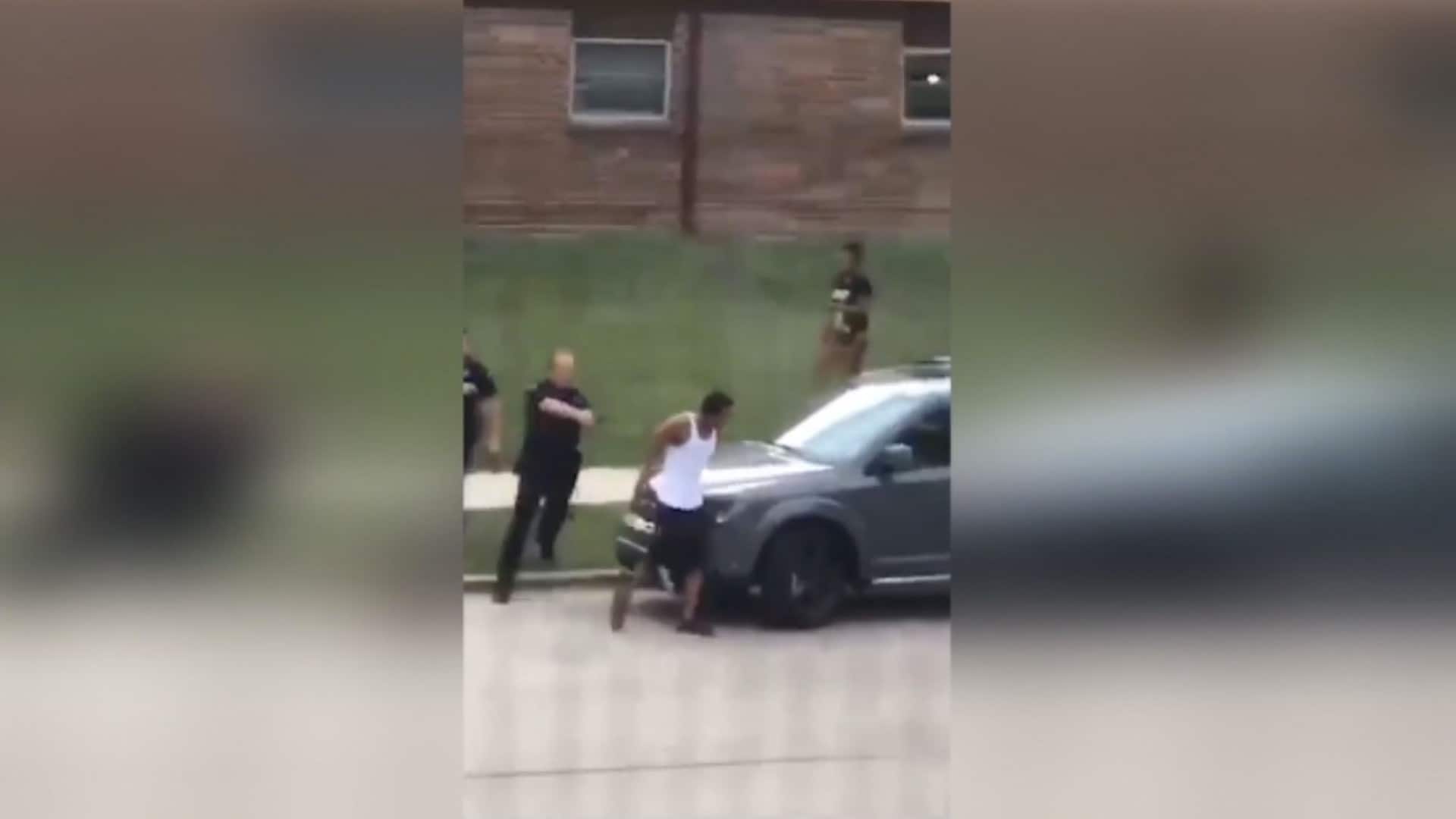 Black Wisconsin man hospitalized after police shoot him in the back

3 months agoVideo
0:24
An edited version of a video circulating on social media that showed Kenosha, Wis., police following Jacob Blake to his car before he was shot multiple times. This edited version does not show the shots being fired. 0:24

Police shot a Black man in the back multiple times in Kenosha, Wis., as his three sons watched on Sunday, his family's lawyer said.

The shooting prompted a stark call for action from the state's Democratic governor to recognize racism within the state and broadly around the country.

Jacob Blake, 29, was taken to a hospital in serious condition after the shooting late Sunday afternoon. Blake's father told NBC News on Monday that his son was out of surgery and in stable condition.

News of the shooting sparked a night of unrest during which protesters hurled firebombs and bricks at law enforcement officers in Kenosha, leading Wisconsin Gov. Tony Evers to call in the National Guard on Monday.

A video circulating on social media showed Blake walking toward the driver's side of a grey SUV followed by two officers with their guns drawn and pointed at his back. Seven gunshots can be heard as Blake, who appears to be unarmed, opens the car door. (The shortened version of the video above does not show the shots being fired.)

It was unknown whether the officers saw something inside the vehicle to justify deadly force. It was also not clear whether one or both officers fired their weapons.

Crowds gathered at the scene, set fires and threw bricks and Molotov cocktails at police, prompting authorities to impose a curfew. On Monday morning Kenosha County announced on Twitter that its courthouse and administration building would be closed due to damage from the night's unrest.

Evers issued comments just as protesters took to the streets in Kenosha and clashed with police, demanding action from elected officials in Wisconsin "who have failed to recognize the racism in our state and our country for far too long."

"While we do not have all of the details yet, what we know for certain is that he is not the first Black man or person to have been shot or injured or mercilessly killed at the hands of individuals in law enforcement in our state or our country," Evers said.

Saying he stands with everyone who has demanded justice, equity and accountability for excessive use of force when engaged with Black people, the Democratic governor was met with condemnation from other, mainly Republican officials.

"As always, the video currently circulating does not capture all the intricacies of a highly dynamic incident," Deates said in a statement. "We ask that you withhold from passing judgment until all the facts are known and released."

Evers called a special session of the Republican-controlled legislature starting Aug. 31 to pass a package of police reform bills he put forward in June, following the death of George Floyd while in custody of Minneapolis police. The bills would ban the use of chokeholds by Wisconsin police officers, as well as limit other uses of force.

The incident occurred three months after the death of George Floyd, a 46-year-old Black man, in Minneapolis police custody sparked nationwide protests against police brutality and structural racism in the United States.

Former vice-president Joe Biden, the Democrat seeking to defeat U.S. President Donald Trump in the Nov. 3 election, on Monday called for the officers to be held accountable and for the dismantling of systemic racism.

"And this morning, the nation wakes up yet again with grief and outrage that yet another Black American is a victim of excessive force," Biden said in a statement, noting that Blake was shot in the back. "These shots pierce the soul of our nation."

Social media posts showed crowds marching on Sunday evening down streets in Kenosha, a city of around 100,000 people on Lake Michigan about 100 kilometres north of Chicago.

Clyde McLemore, a member of a nearby chapter of the Black Lives Matter movement, said he was helping to organize a protest at noon local time on Monday that would walk from Blake's house to the courthouse and police station about four kilometres away in Kenosha. 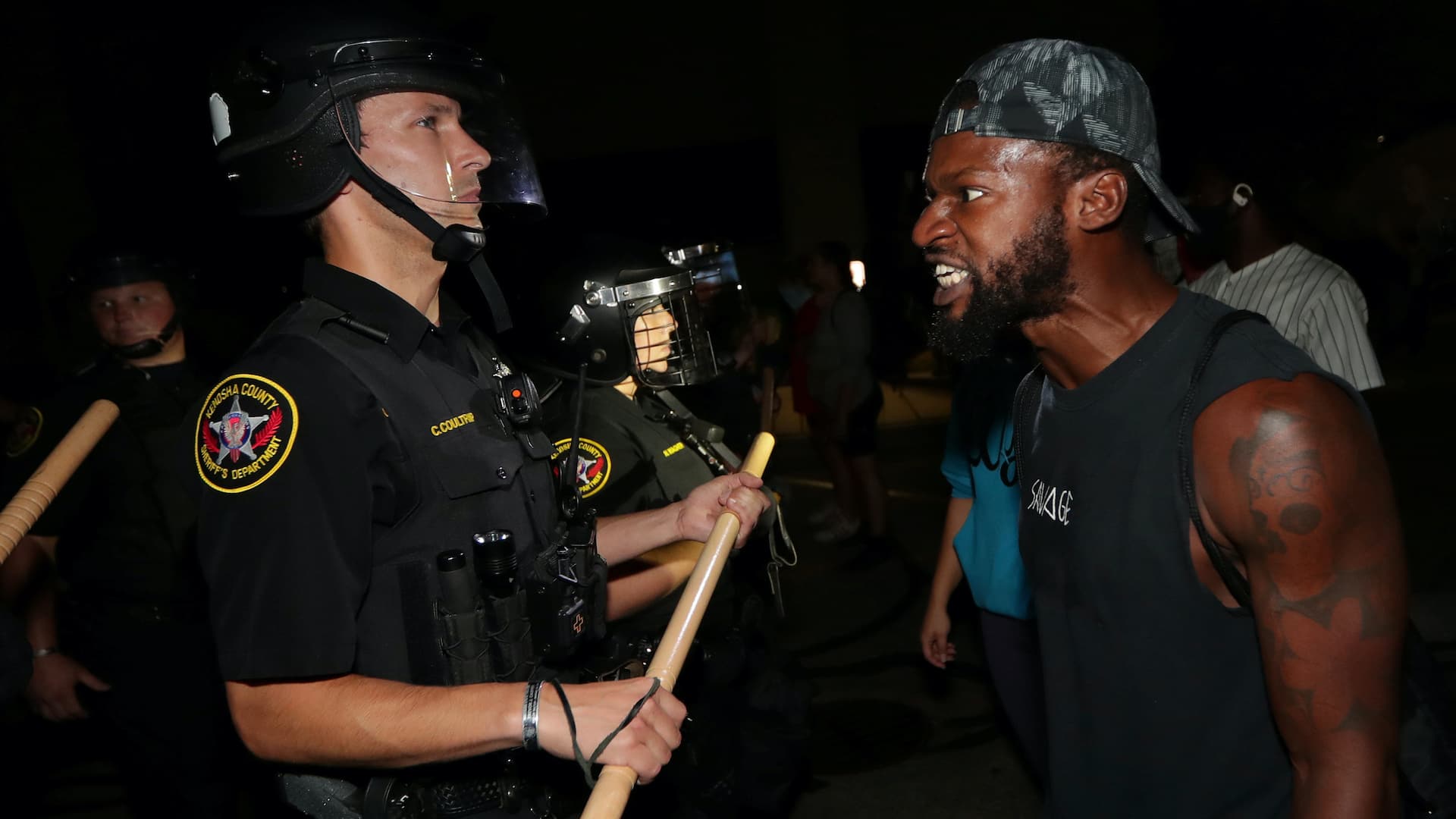 3 months agoVideo
0:56
Angry crowds marched toward the police department, with some protesters setting fires to vehicles and smashing windows. 0:56

Whitney Cabal, one of the leaders of the Black Lives Matter chapter in Kenosha who is also known by her social media name Billy Violet, said her group has staged protests following two other incidents of police use of force in recent weeks and has been dissatisfied with the police response.

"This city is not going to stop burning itself down until they (protesters) know that this officer has been fired," she said. "There was no reason for seven shots to be fired into this man's back while he had three kids in the car."

The shooting occurred around 5 p.m. as officers were responding to what they termed a "domestic incident."

The victim was immediately taken to hospital by the police, according to a Kenosha Police Department statement. No further explanation was given by the police as to what led to the shooting.

Prominent civil rights attorney Ben Crump, who said he had been retained by the Blake family and who has represented George Floyd's family, said in a statement that Blake had been trying to de-escalate a domestic incident when the officers first shot him with a Taser.

"As he was walking away to check on his children, police fired their weapons several times into his back at point blank range. Blake's three sons were only a few feet away and witnessed police shoot their father," Crump said.

The officers involved in the shooting have been placed on administrative leave, the Wisconsin Department of Justice said early on Monday. Officers are routinely placed on leave after a shooting involving law enforcement until an investigation has been completed.

The state's Division of Criminal Investigation said it would work to issue a report to prosecutors within 30 days.