'These fires are not just fast and furious, but they're really expensive to fight,' expert says 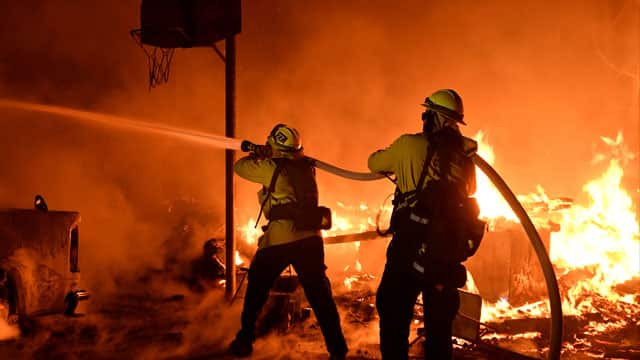 The most damaging fire was in Ventura County northwest of Los Angeles, where 150 structures were confirmed destroyed. But a fire official said he suspected "hundreds more" would be lost when flames died down enough to make a thorough assessment.

In the San Gabriel Mountains foothills of Los Angeles about 72 kilometres away from the city, 30 structures burned. Mayor Eric Garcetti said the gusty winds expected to last most of the week had created a dangerous situation and he urged 150,000 people under mandatory evacuation orders to leave their homes before it's too late. 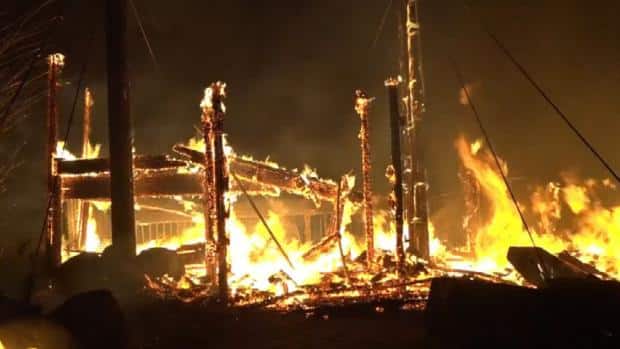 "We have lost structures, we have not lost lives," he said. "Do not wait. Leave your homes."

As the sun rose Tuesday, the first of at least three additional Southern California fires broke out, fuelled by stiff winds that prevented firefighting aircraft most of the day from dumping water to protect homes or attack the march of flames.

In addition to prompting hasty evacuations, the fires shut down two freeways for hours and sent heavy, acrid smoke billowing over the Los Angeles area, creating a health hazard for millions.

There were no immediate reports of any deaths. Two people were critically injured in a small San Bernardino County fire, but no other serious injuries were reported. The fires were under investigation and no causes had been found.

The Ventura wildfire exploded to nearly 207 square kilometres in a matter of hours. It was fanned by dry Santa Ana winds clocked at well over 96 km/h and spit embers up to 800 metres ahead of fire lines.

Lisa Kermode ignored the first evacuation alert that buzzed on her phone when it said the fire was 24 kilometres away from her home. But the flames were nearly on top of her an hour later when she rounded up her three children, still in their pyjamas, and told them to grab some jeans so they could leave. 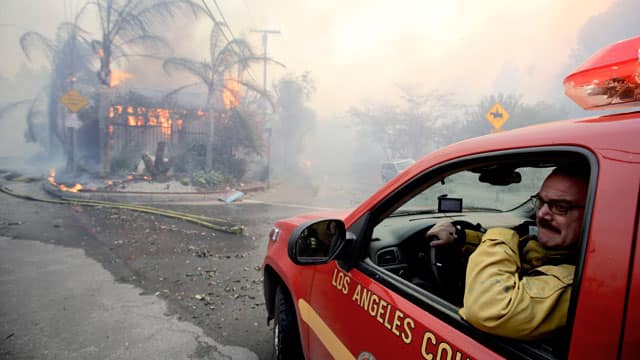 3 years agoVideo
5:53
Devastation from the wildfires in California continues to spread, forcing tens of thousands of people from their homes. It's the latest dire situation in what's been the state's worst wildfire season ever -- and it may not be over yet 5:53

They returned home Tuesday to find their home and world in ashes, including a Christmas tree and the presents they had just bought.

"We got knots in our stomach coming back up here," Kermode said. "We lost everything, everything, all our clothes, anything that was important to us. All our family heirlooms — it's not sort of gone, it's completely gone."

The fires came just eight weeks after the deadliest and most destructive series of wildfires in state history burned through Northern California and its fabled wine country and killed 44 people and destroyed 8,900 homes and other buildings.

Fires are not typical in Southern California this time of year but can break out when dry vegetation and too little rain combine with the Santa Ana winds. Hardly any measurable rain has fallen in the region over the past six months.

Like the deadly October fires in Napa and Sonoma counties, the new blazes were in areas more suburban than rural.

Fires in those settings are likely to become more frequent as climate change makes fire season a year-round threat and will put greater pressure on local budgets, said Char Miller, a professor of environmental analysis at Pomona College who has written extensively about wildfires.

"There are going to be far greater numbers that are going to be evacuated, as we're seeing now," Miller said. "These fires are not just fast and furious, but they're really expensive to fight."

Mansions and modest homes alike were in flames in Ventura. The Hawaiian Village Apartments burned to the ground. The Vista del Mar Hospital, which treats patients with mental problems or substance abuse, including veterans with post-traumatic stress syndrome, smouldered after dawn. All patients were safely evacuated.

Aerial footage showed dozens of homes in one neighbourhood burned to the ground and a large subdivision in jeopardy as embers blew about wildly. Burned-out cars sat on their wheel rims next to destroyed homes.

'It was really scary'

More than 27,000 people were evacuated, and one firefighter suffered bumps and bruises in a vehicle accident in Ventura County.

The fire erupted near Santa Paula, a city of about 30,000 people about 97 kilometres northwest of Los Angeles known for its citrus and avocado orchards and farm fields along the Santa Clara River.

"We had the fire come through here, pretty dramatically, all night long," said Karen Heath-Karayan, who stayed up with her husband to douse embers that rained on their home and small lot where they sell Christmas trees. "It was really scary."

They were ordered to evacuate as flames got within about 90 metres, but decided to protect their property and chickens and goats. They hosed down their roof and hit hotspots before winds pushed the fire over a hill toward Ventura, a city of 106,000.

'We consider ourselves very lucky'

"It was just exponential, huge growth because the winds, 50 mile an hour [80 km/h] out of the east, were just pushing it and growing it very, very large, very quickly," Ventura County Fire Chief Mark Lorenzen said.

The fire on the northern edge of Los Angeles near the city's Sylmar neighbourhood was estimated at more than 44 square kilometres.

Alan Barnard watched flames come downhill toward his Lakeview Terrace home and told his wife to grab their 11-month-old grandson and leave. He collected a few possessions and then took his dog and left the quiet cul-de-sac.

When he returned later, a bedroom and his garage were destroyed, but three-quarters of the house remained intact.

"We're pretty much out of the main danger now," he said as he tried to spray hotspots with a garden hose. "We consider ourselves very lucky."

Southern California's gusty Santa Ana winds have long contributed to some of the region's most disastrous wildfires. They blow from the inland West toward the Pacific Ocean, speeding up as they squeeze through mountain passes and canyons.

Nearly 180,000 electrical customers in the Ventura County lost power, and schools in the district were closed. Some firefighting efforts were hampered when pumping stations lost power and hydrants ran dry.