#Whoarethey: Europe's asylum-seekers come from all walks of life, abilities

It is hard not to notice all the able-bodied men among the asylum-seekers flooding into Europe, but the diverse crowds are also made up of women, small children, the elderly and people with physical challenges. 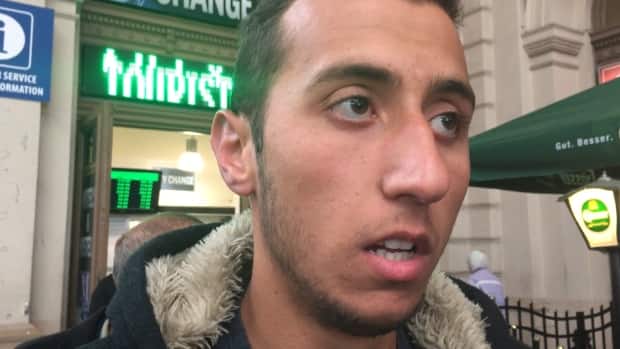 5 years ago
2:06
Aladin, 24, and his family were among crowds of asylum seekers at Keleti station in Budapest 2:06

It is hard not to notice all the men among the asylum seekers walking along the abandoned tracks at Hungary's southern border.

The meandering trek leading to the threshold of Hungary isn't for the fainthearted. But it is for the utterly determined.

Among the many fit, able-bodied men with backpacks you'd expect to take on the cornfields to cross the Hungarian border with Serbia, a one-legged man on crutches steadily makes his way along the tracks.

There are also elderly travellers, and women making the journey alone with their children.

Some of those children are very small, many carrying their own tiny backpacks, mats, perhaps a bottle of water.

"Please do not film me," said one of the women, moments after she arrived alone with five children at a garbage-strewn makeshift camp set up near Roszke, Hungary.

She had come straight from Aleppo and was en route to Germany. Her husband left to make the same risky journey — by sea, train and foot — three months ago.

Her eyes well up as she admits she hasn't heard from him since he left.

The number of these mostly Syrian women traversing Europe alone with children is one of the many surprises in a sudden influx that is challenging Europe's approach to the countless who want nothing but to find a haven on its territory.

The early sketch of the human map of this migration is revealing.

Stand at one end of the abandoned train tracks, where a Hungarian policeman is stationed to direct people to the camp, and you get a sense of the complexity of Europe's newest arrivals.

Notable, for example, is the number of elderly men and women who have managed to endure a journey that often takes a month or longer, sometimes in terrible heat or rain, without proper nourishment or shelter.

And the number of pregnant women, some of whom may have made it on foot just fine, but were severely disadvantaged in the chaotic attempts to get people on buses at the Hungarian border. Often, it was the young men who got to board — and got in front of the cameras — first.

The strategy for many, it seems, has been travelling in entire families — sometimes three generations moving as one, like a tiny dislocated village whose members look out for each other.

"All of us are carrying collective pain," said Rowa'a Meirej who arrived with her extended family after more than a month on the road from Aleppo.

"The children had to endure. As a woman I endured my own pain and that of my husband and my children. We are all hurting."

Accounts of a failed state

Among the mix, there are people of various ethnic backgrounds and sects, though largely Muslim from Iraq, Afghanistan, and Syria. We met many students, an engineer, a would-be law student, and stay-at home moms.

Most are Syrians — and again, perhaps unexpectedly, come directly from Syria. 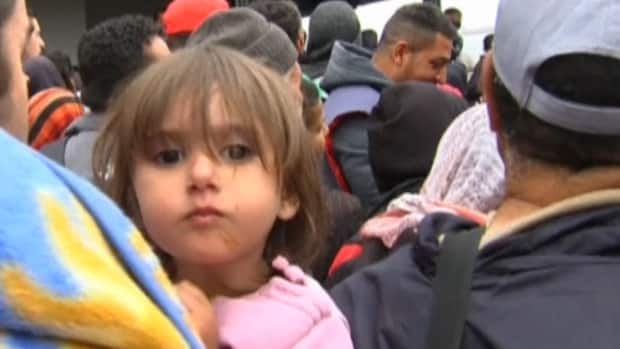 5 years ago
2:45
Following migrant groups at several key points along the way to their final destinations 2:45

So while their stories and reasons for leaving give a sense of what Europe can expect of them, they also provide some of the most complete, first-hand accounts of life in what has become a failed, violent and divided state.

But in this new, train-side testimony direct from Kobani, Quneitra, Dera'a, and Deir el Zour, people spoke of the sieges, the skyrocketing prices, shuttered schools and unfinished degrees. Young students from Kobani complained about the economy.

"It's surrounded, no food is coming in," said 19-year-old Mohamed Ahmed, who hopes to study to become a pharmacist.

Some also mentioned the unpredictable, rival checkpoints they must traverse daily to get anywhere.

"First, it's a checkpoint for the regime. You walk a little further, and then a checkpoint for Daesh (ISIS.) Another bit, and it's the Free Syrian Army," says one young woman who arrived with her extended family from Deir el Zour. She did not want to be named or photographed due to concerns for remaining family in Syria.

"You have to please every side. Coming here really was easier."

She says one of the prime motivations for her family's departure — a factor also cited by others — were the young men in her family, like her brother. The concern that as they come of age, they are vulnerable to becoming forced recruits for ISIS or the Syrian army.

It is the reason many families are sending out their sons, sometimes under-age, and sometimes even unaccompanied, she says.

The fact that ISIS stripped her of her job as a teacher because it deemed the curriculum "unIslamic," and that women are forced to dress in black from head to toe, were behind her own decision to leave Syria.

She says those who remain in Syria are those without means. Those who come either have the money for the journey and the smugglers, or they've borrowed it from multiple sources.

"There was no solution except for Europe. It was the safest place and protects human rights," she says.

Increasingly, it seems Syria's people – men, women and children from all walks of life — are giving up on the country en masse.