U.S. imposes new sanctions on Venezuela to squeeze out leader amid humanitarian crisis

The United States on Friday ramped up its attempt to dislodge Venezuelan President Nicolas Maduro from power, imposing new sanctions and revoking visas, while opposition leader Juan Guaido said Maduro's support among the military was cracking.

Maduro has called the U.S.-backed humanitarian aid effort a veiled invasion meant to push him from power

The United States on Friday ramped up its attempt to dislodge Venezuelan President Nicolas Maduro from power, imposing new sanctions and revoking visas, while opposition leader Juan Guaido said Maduro's support among the military was cracking.

Venezuelan military officials last weekend blocked an opposition-backed effort to bring food into the country via its borders with Colombia and Brazil, leaving two aid trucks in flames and five people dead.

Guaido, who is recognized by most Western nations as Venezuela's rightful leader, visited Paraguay and Argentina on Friday to shore up Latin American support for a transition government for the crisis-stricken nation.

Maduro retains control of state institutions and the apparent loyalty of senior figures in the armed forces.

Following a meeting with Argentine President Mauricio Macri in Buenos Aires, Guaido said, without providing evidence, that 80 per cent of Venezuela's military nonetheless supported a change in leadership and that he would continue to seek the support of officers.

Earlier on Friday in Paraguay, he said 600 members of Venezuela's armed forces had already abandoned Maduro's government following the clashes over the aid.

Foreign military intervention is seen as unlikely and Guaido's international backers are instead using a mix of sanctions and diplomacy to try to put pressure to bear on Maduro.

"We are sanctioning members of Maduro's security forces in response to the reprehensible violence, tragic deaths, and unconscionable torching of food and medicine destined for sick and starving Venezuelans," U.S. Treasury Secretary Steven Mnuchin said in a statement.

Watch: Venezuela has been hit with new sanctions, but will they actually work? 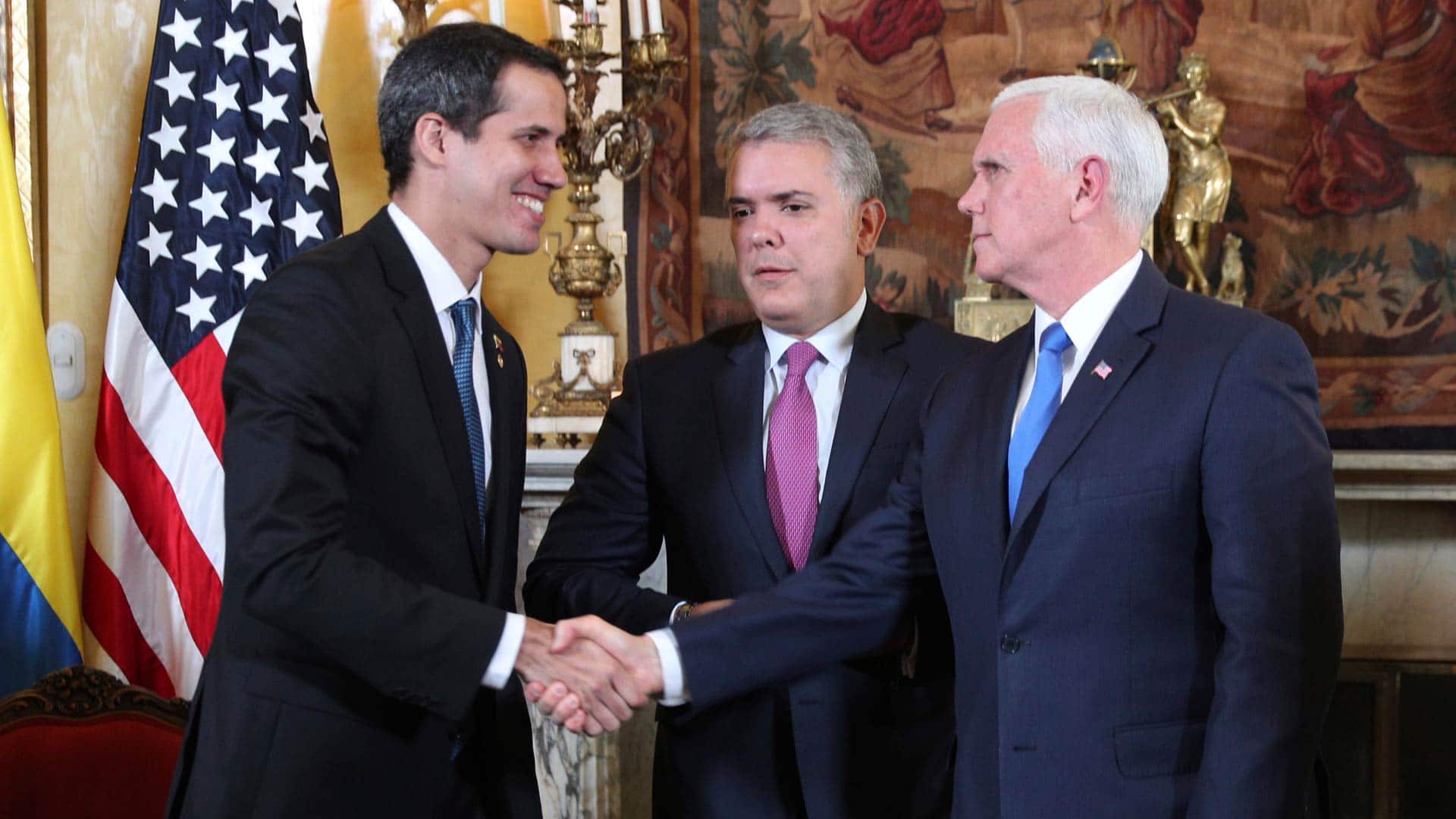 Venezuela hit with new sanctions amid border chaos, but will they actually work?

2 years agoVideo
2:14
The U.S. targeted Venezuela's government with new sanctions after deadly violence blocked humanitarian aid from reaching the country over the weekend. Vice-President Mike Pence led talks on trying to get Nicolas Maduro out of power, and hit other Venezuelan politicians who support Maduro with sanctions too. But there are questions about whether sanctions will actually work. 2:14

The U.S. will continue to target Maduro loyalists prolonging the suffering of the victims of this man-made humanitarian crisis," he said.

U.S. sanctions block any assets the individuals control in the U.S. and bars American entities from doing any business or financial transactions with them.

The list includes National Guard Cmdr. Richard Lopez and five other police and military officials based near the Colombian or Brazilian borders.

The U.S. State Department later said it had revoked the travel visas of 49 people as it cracked down on "individuals responsible for undermining Venezuela's democracy."

Venezuela's Information Ministry did not immediately reply to a request for comment.

Guaido slipped out of Venezuela last week, in violation of a Supreme Court order not to leave the country, to join the aid convoys in Colombia. There, he met with U.S. Vice-President Mike Pence and other regional leaders and later travelled to Brazil.

He has promised to return to Venezuela by Monday, seen as a form of direct defiance to Maduro, who has said Guaido will eventually "face justice."

Governments around the region have called on Maduro to let aid in as inflation above two million per cent per year and chronic shortages of food have left some eating from garbage bins in order to ward off malnutrition.

Maduro has called the U.S.-backed humanitarian aid effort a veiled invasion meant to push him from power, and has insisted that there is no crisis in the country.

Russia has accused the U.S. of preparing to intervene militarily in Venezuela and, along with China, blocked a U.S. bid this week to get the United Nations Security Council to take action on Venezuela.

Friday's action is the second set of sanctions this week, after the U.S. on Monday targeted four Venezuelan state governors allied with Maduro. Washington on Monday also called on allies to freeze the assets of state-owned oil company Petroleos de Venezuela SA.