Virginia killer with Nova Scotia ties to be paroled, deported

Elizabeth Haysom, a Canadian convicted along with her then-boyfriend in the 1985 murder of her parents in Virginia, has been paroled. The state plans to deport her.

A man and woman convicted of the 1985 murder of the woman's parents while they were studying together at the University of Virginia have been granted an unexpected parole.

Jens Soering, the son of a German diplomat, and Canadian Elizabeth Haysom, who were a couple at the time of the murders, will be released after decades in prison.

The decision Monday by the Virginia Parole Board was approved by Virginia Gov. Ralph Northam, who rejected Soering's request for a full pardon. Soering and Haysom were convicted of the brutal murders of Haysom's parents, Derek and Nancy Haysom in a case that drew international attention.

Both would have spent their remainder of their lives in prison if the parole board hadn't intervened.

Watch: Brother of victim tells CBC in 1990 that Soering and Haysom 'should never be set free': 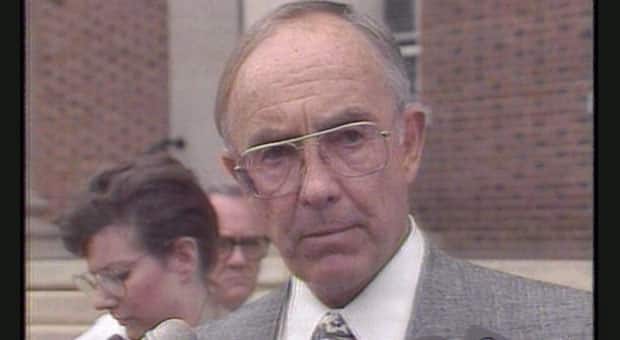 11 months ago
0:30
This excerpt from a 1990 CBC report shows the brother of one of the victims of a 1985 murder discussing the two people convicted in their deaths. 0:30

Soering was serving two consecutive life sentences, and Haysom had nearly 60 years left in a 90-year term. Soering, a German citizen, and Haysom, a citizen of Canada, will be deported, though it wasn't immediately clear to what country or countries they would go.

"[Immigration and Customs Enforcement] is currently interviewing the other individual [Haysom] to determine alienage and removability," Carissa Cutrell, an ICE spokersperson, told the Richmond Times-Dispatch in Virginia on Wednesday.

"For operational security, ICE does not discuss details of impending removals until after they are completed."

Derek Haysom, a South African native, had lived in Nova Scotia for nearly 15 years and at one time was the chief executive officer of the Sydney Steel Corp., according to press reports at the time of the killings.

The family had moved to Virginia in 1981 upon his retirement.

It's not clear how long Elizabeth Haysom, 55, spent in Canada growing up. Born in Africa, she attended boarding school in England before going to the University of Virginia.

She was days shy of 19 when her parents were killed, and then fled to England with Soering. They were apprehended there a year after the murders.

Soering, now 53, chose to go to trial but was convicted by a Virginia jury. Haysom had accepted a plea deal and testified for the prosecution at Soering's trial.

Through the years, the former lovers have given interviews blaming the other for the killings. Haysom has also given conflicting statements about sexual abuse she has alleged her mother committed.

She told the Times-Dispatch in a 2016 interview that she was "profoundly ashamed of my crime."