Penalties on second-hand clothing imports imposed by some East African countries are putting pressure on a lot of people who rely on the trade in Canada and abroad: from the charities that collect our discarded clothes to the recyclers, resellers and workers employed along the way.

Among the piles and piles of used clothes for sale at the central market in Arusha, Tanzania, was a green sweatshirt bearing the logo of Cougar Robotics Team 1403 and just a last name printed on the back.

CBC News tracked down the original owner of the garment in Skillman, New Jersey, where Mihir Nayak attended Montgomery High School and was a member of the robotics team. Like many people in Canada, the U.S. and other wealthy western countries, Nayak had donated his unwanted shirt to a charity.

But some countries don't want our used clothing anymore. The East African Community (EAC), which represents Tanzania, Burundi, Kenya, Rwanda, South Sudan and Uganda and makes up a significant chunk of the reuse market from North America, has proposed banning second-hand clothing imports.

That's putting pressure on a lot of people who rely on the trade in Canada and overseas: from the charities who collect the goods to the recyclers, resellers and workers employed along the way.

"The trust which runs the textile diversion business is able to contribute over $10 million a year to our mission," Scott Ebenhardt, director of business development at National Diabetes Trust, said.

"It's a massive revenue generator for us."

Diabetes Canada, along with other Canadian charities, partner with for-profits like Value Village to sort, grade and resell the donations they receive. Value Village then sells them through their retail stores, and any excess clothing suitable for reuse is then sold to wholesalers who might sell them overseas.

"Frankly, there's not another thrift player in the marketplace that could actually handle the 100 million pounds [45 million kg] that we are producing every year," Ebenhardt said.

A spokesperson for Value Village says the economic hit from EAC penalties on used clothing has prompted the retailer to put more emphasis on domestic store sales rather than reselling to wholesalers.

"What we have chosen to do is focus on efficiency inside of our stores to compensate for that," Tony Shumpert said, "figuring out how to drive merchandise in our stores that has a higher yield."

So far, though, he says it hasn't affected the retailer's ability to support charities by purchasing their used clothing donations.

In 2016, global exports of used clothing were valued at $2.445 billion, with exports from Canada and the U.S. accounting for one-quarter of that number, according to data from UN Comtrade.

The value of goods imported into the EAC last year was an estimated $213-million — and that's before the goods make their way through the chain of secondary and tertiary resellers.

Since the ban was proposed in early 2015, the six countries of the EAC have imposed steep tariffs on second-hand clothing imports.

Charities and businesses are already feeling the strain.

"That has acted as a de facto ban because the tariffs are so high that nobody can afford to import [the clothes] with the tariff rate," King told CBC News.

"That's already started to impact the industry and started some job losses." 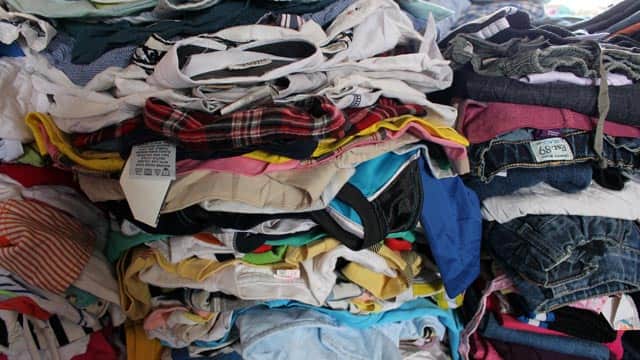 How your old clothes end up on the streets of Tanzania

3 years ago
1:43
We trace the path of Canadians’ donated clothing that ends up in foreign resale markets 1:43

In a survey of its members conducted by SMART, 40 per cent of respondents said they have been forced to reduce their staffing levels by one-quarter or more and expect that number to increase to half if the ban goes into effect as planned in 2019.

SMART has been lobbying Canadian and American government officials to persuade the countries implementing the tariffs to back down. Kenya recently pulled out of the ban after pressure from the U.S. government during trade negotiations.

EAC countries like Tanzania say second-hand clothes are undercutting their local textile industries and weakening demand for locally produced clothing. They are pinning their hopes on this protectionist strategy to revive the domestic textile manufacturing industry.

That sentiment is echoed by a group that represents the private sector in East Africa.

"It's a high time that EAC countries embarked on manufacturing apparels such as undergarments, ties, scarfs, that require low-level technology and skills as the region works on a phase-out approach of imported second-hand clothes," Lilian Awinja, CEO of the East African Business Council [EABC], said in a release.

Awinja believes many job opportunities in fashion and design could be created by expanding the cotton-processing industry locally. Currently only 15 per cent of cotton is processed in the EAC.

But a researcher who has studied the decline in African clothing industries says it's unlikely imports of second-hand clothing are to blame.

"It's not clear to me that banning imports of second-hand clothing is necessarily going to enable domestic clothing industries to restart — unless you can restrict competition from cheap Chinese and, perhaps, now and again, Indian imports," said Dr. David Simon, professor of development geography at Royal Holloway, University of London.

Simon warns that the EAC ban would have a devastating effect on thousands of people who earn their living as wholesalers or resellers in those countries.

'Now we pray to God the government stops to think'

Edward (who requested his real name not be used because he fears reprisals) is one of many resellers in Arusha. He buys higher-quality western clothes from women who sell in the central market and then sells them in his own shop. He relies on income from his business to support his parents, who are subsistence farmers. With no post-secondary education and limited job opportunities, he's worried about the effects of the EAC's proposed ban and penalties on used-clothing imports.

"Now we pray to God the government stops to think about this situation."

Megan McPhaden is a Toronto-based multimedia journalist. Her past work has taken her around the world to Washington, D.C., Korea and Tanzania.