Some U.S. states plan 'risky' reopenings, but appear to have White House support

A handful of mostly southern U.S. states will begin loosening economic restrictions this week in the midst of a still virulent pandemic, providing a live-fire test of whether the country's communities can start to reopen without triggering a surge that may force them to close again.

Trump says he strongly disagrees with Georgia's plan to reopen: 'It's just too soon'

A handful of mostly southern U.S. states will begin loosening economic restrictions this week in the midst of a still-virulent pandemic, providing a live-fire test of whether the country's communities can start to reopen without triggering a surge that may force them to close again.

The Republican governors of Georgia, South Carolina, Tennessee and Ohio all announced on Monday they would begin peeling back the curbs on commerce and social activity aimed at stopping the coronavirus outbreak over the next two weeks. Colorado's Democratic governor said on Tuesday he would open retail stores on May 1. Officials from Michigan and Texas also recently stated they are working on plans to reopen.

Georgia has been hardest-hit of those states, with more than 21,000 cases and nearly 846 deaths, including a dense cluster in a rural area in the state's southwest.

Amid a national debate over how to fight the virus while mitigating the deep economic toll, these moves are the first to test the borders of resuming "normal" life, though none of the states has met the White House guideline, unveiled last week, of two weeks of declining cases before a state should reopen.

"The people of Georgia ... have been strong, resolute, but at the same time he must do what he thinks is right," Trump said of Kemp.

"I want him to do what he thinks is right. But I disagree with him on what he's doing … But I think [opening] spas and beauty salons and tattoo parlors and barbershops in phase one … it's just too soon."

Earlier Wednesday morning, Trump had tweeted his apparent support for those governors.

"States are safely coming back," he wrote. "Our Country is starting to OPEN FOR BUSINESS again."

The decision to ease restrictions has pitted some business owners and others keen to get the economy up and running again against a wary public and health officials warning of a potential resurgence in cases.

"It's a matter of concern, this whole idea of opening up. It's based on non-science generated parameters," Dr. Boris Lushniak, dean of the University of Maryland School of Public Health, told Reuters in an interview.

A Reuters/Ipsos opinion poll showed a majority of Americans believed stay-at-home orders should remain in place until public health officials determine lifting them is safe, despite the damage to the U.S. economy. It's a finding in line with most other polls on the same subject, despite significant media coverage in the U.S. for a smattering of protests against stay-at-home orders, most which have numbered in the low hundreds.

In addition to pushback from Trump, Kemp's plan to begin reopening the Georgia economy faces two major hurdles — the state is struggling to increase testing for new coronavirus infections and to boost tracking of those in contact with infected people.

Without those capabilities, experts said Georgia risks a quick rebound of COVID-19 as businesses reopen. Kemp's decision has been questioned because the state has yet to show continuing progress in those areas, and it could be difficult to catch up.

"The virus moves faster than government does," said Dr. Jennifer Nuzzo, an epidemiologist at the Johns Hopkins Center for Health Security. "So if I had to bet on who would come out of the gate faster, it would be the virus."

Georgia has ranked in the bottom 10 per capita in testing. After expanding capacity, the number of tests administered in Georgia had plateaued between 3,500 to 4,000 a day. However, on Wednesday, the state reported almost 6,000 tests over 24 hours, with Kemp saying on a conference call with Republican Sen. Kelly Loeffler that Georgia was "really ramping up" its capacity.

But critics have questioned Kemp's adherence to the White House guidelines, which recommend 14 days of declining new infections before reopening businesses. On Friday, elective medical procedures will resume and barbershops, nail salons and gyms will reopen with restrictions. Limited in-restaurant dining will resume Monday.

"At best, you're only seeing a week's worth of decline," said Dr. Colin Smith, an epidemiologist and professor of public health at Georgia State University.

WATCH l 'Give me liberty or give me death': 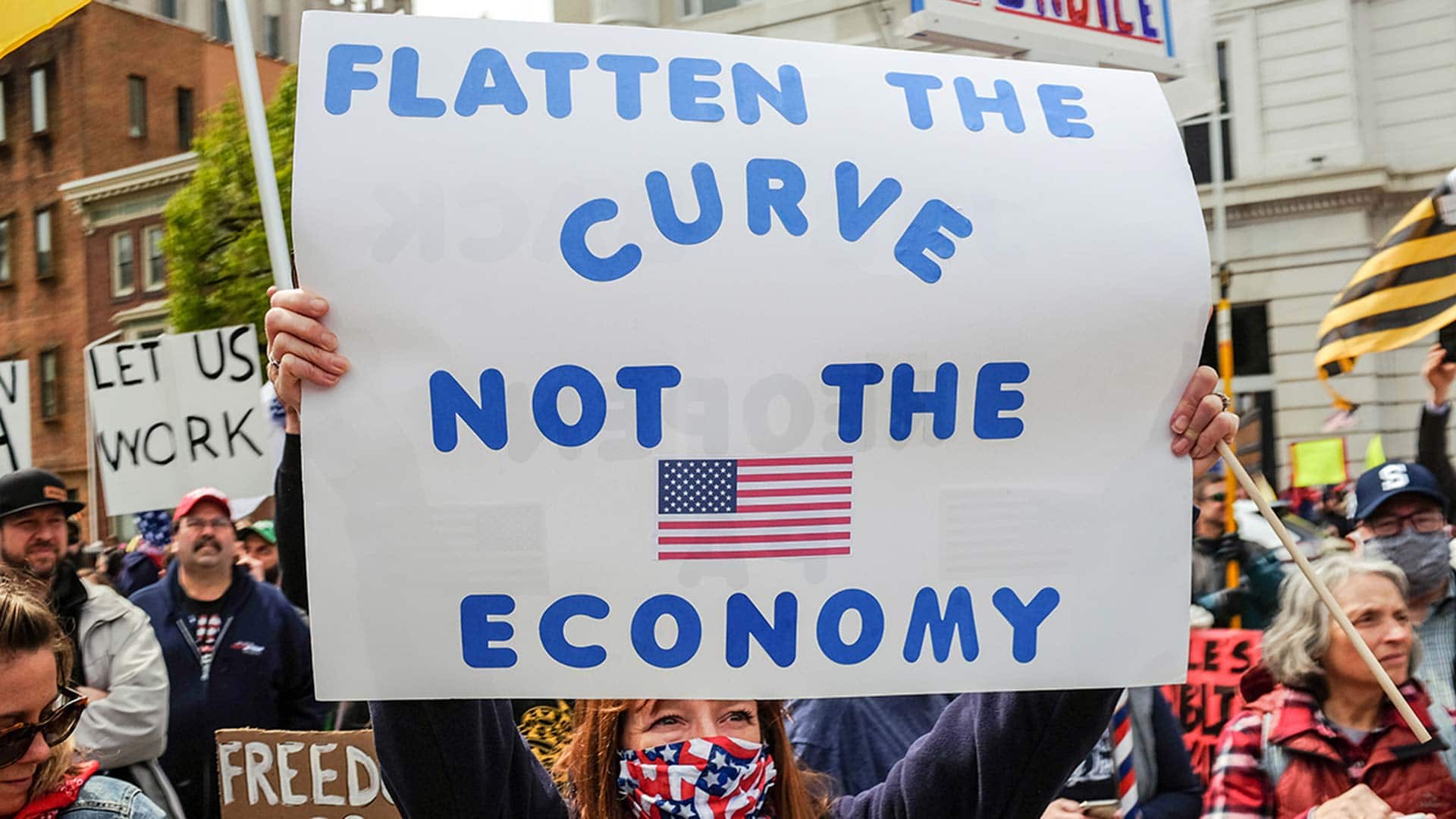 Frustration over COVID-19 lockdown boils over at Pennsylvania protest

10 months ago
2:02
Thousands of people frustrated by the ongoing COVID-19 lockdown protested in Harrisburg, Pa., on Tuesday. 2:02

At the Wednesday briefing, Trump also called on the director of the U.S. Centers for Disease Control and Prevention to walk back his remark that a second wave of the coronavirus in the fall could be worse than the current situation.

CDC director Robert Redfield made the widely circulated comment in an interview Tuesday with the Washington Post.

Trump tweeted that Redfield was misquoted and would be putting out a statement. Redfield, however, said he was quoted accurately.

"I think it's really important to emphasize what I didn't say: I didn't say that this was going to be worse," Redfield said at the White House briefing. "I said it was going to be more difficult and potentially complicated because we're going to have flu and coronavirus circulating at the same time."

Deaths from COVID-19, the respiratory illness caused by coronavirus are over 46,000 countrywide as cases climbed to more than 837,000, according to tracking by Johns Hopkins University.

Experts say the United States, with a population of nearly 330 million people, should test three million per week to get an accurate sense of the virus's reach. States have tested only one-third of that number in the past seven days, according to the COVID Tracking Project, a volunteer organization launched by The Atlantic.

"We've got to get more testing done before we make any public health decisions," said Lushniak.

New York Gov. Andrew Cuomo emerged from a meeting with Trump at the White House on Tuesday and said the president had agreed to help his state procure chemical reagents and other supplies needed to double testing capacity.

The governor said New York would try to double the number of people it tests each day — including diagnostic and antibody tests — to 40,000, characterizing the task as an "enormous undertaking" that would take weeks.