The number of confirmed COVID-19 cases in the U.S. rose to 81,378 on Thursday — more than any other country, overtaking both Italy and China — while the death toll passed the 1,000 mark, according to a running tally by Johns Hopkins University. 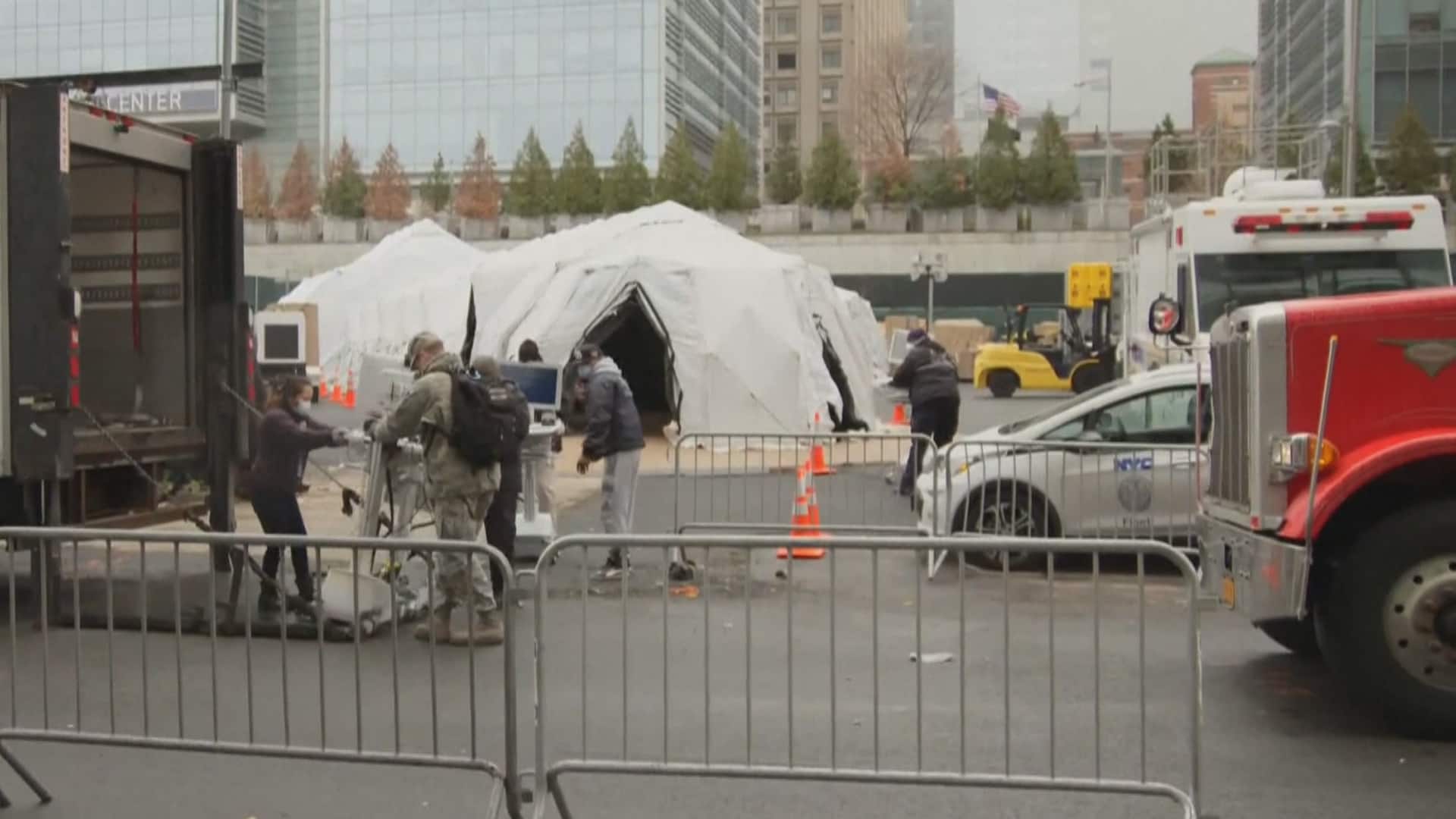 10 months agoVideo
4:19
For the first time since 9/11, a hospital in New York City is using a series of tents as a makeshift morgue. The city is the epicentre of the coronavirus outbreak in the U.S. and is appealing for more doctors, nurses, hospital beds and medical supplies. 4:19

The number of confirmed COVID-19 cases in the U.S. rose to 83,836 on Thursday — more than any other country, overtaking both Italy and China — while the death toll passed the 1,000 mark, according to a running tally by Johns Hopkins University.

The university said Thursday at least 1,209 people in the U.S. have died from the disease caused by the coronavirus.

Meanwhile, hospitals and government authorities in New York, New Orleans and other hot spots grappled with a dire shortage of supplies, staff and sick beds. Medical facilities were running short of ventilators and protective masks, and were being hampered by limited testing capacity.

The U.S. Centers for Disease Control and Prevention (CDC) reported an increase of 13,987 cases and 257 deaths in its most recent measuring period, between Tuesday and Wednesday at 4 p.m. ET. The increases in the previous 24-hour period were 144 deaths and about 11,000 new cases.

To help businesses deal with the outbreak, the Trump administration has decided it will be easing back on environmental enforcement and compliance requirements, according to an Environmental Protection Agency memo. The decision follows requests by the energy industry and other sectors.

"In general, the EPA does not expect to seek penalties for violations of routine compliance monitoring, integrity testing, sampling, laboratory analysis, training, and reporting or certification obligations in situations where the EPA agrees that COVID-19 was the cause," the EPA memo read.

On the same day — seemingly responding to an unprecedented stimulus awaiting approval by the U.S. House of Representatives — Wall Street rallied for a third straight session. The S&P 500 gained 154.51 points, or 6.24 per cent, and the Dow Jones rose 1,351.62 points, or 6.38 per cent. Those gains capped off the largest three-day percentage gains since 1931 and 1933 respectively, while the Dow's rise of more than 20 per cent since March 23 meets some analysts' definition of a bull market.

New York as the U.S. epicentre

More than one-third of COVID-19 fatalities in the United States have been in New York state, where Gov. Andrew Cuomo has warned hospitals could soon run out of beds and ventilators.

In his daily news conference Thursday, Cuomo said that 385 have died in the state from the virus, an increase from the previous day of 100. He said the goal was to get to a hospital-bed capacity of 140,000, up from the current 53,000 available Authorities were scouting new sites to build temporary facilities, he said.

"The number of ventilators we need is so astronomical. It's not like they have them sitting in the warehouse … there is no stockpile available," Cuomo said.

The federal government was sending "everything we can" to help New York, including ventilators, gloves and protective masks for use in hospitals, White House trade adviser Peter Navarro said.

"But we've also got an emerging problem in New Orleans. We got Detroit, we've got Chicago, Seattle, California, my home state. Like I said, there's planes in the air everywhere now," Navarro added.

Dr. Anthony Fauci, head of National Institute of Allergy and Infectious Diseases, called the acceleration of cases in New York "quite disturbing." He also warned that the virus could return for the next northern winter.

"We hope we get a respite as we get into April, May and June. It is likely to come around next season because it's a very vigorous virus," Fauci told WNYC public radio during an interview in New York on Thursday.

New York's neighbour is also dealing with a surge in cases. New Jersey Gov. Phil Murphy said cases there had increased by nearly 2,500 from the previous day, with the death toll spiking from 19 to 81.

The rampant infections in New York City have dominated much of the national conversation about the disease. But far from the coasts, smaller communities are also preparing for things to get worse, as they have in Albany, Ga.

The largest hospital in Georgia's mostly rural, southwest corner is rapidly running out of space amid the highest rate of coronavirus infection in the entire state. It was believed to have started when a person with the virus came into the region to attend a funeral.

"I can't tell you how it's going to be Friday, much less in the week after," said Scott Steiner, CEO of the four-hospital health system that includes Phoebe Putney Memorial Hospital in Albany.

Roughly 90,000 people live in Albany and surrounding Dougherty County. The virus's impact has been outsized compared with the community's population. Infections countywide have surpassed 100, including seven deaths, making it Georgia's hardest-hit county outside metro Atlanta.

In New Orleans, doctors and hospital officials are seeing an increased number of patients needing intensive care and are working to avoid the possible overwhelming of their systems. Louisiana officials are considering housing patients in hotels and a convention centre in the city.

"We are seeing an escalation in cases across our system," said Warner Thomas, chief executive at Ochsner Medical Center, Louisiana's largest hospital system.

Underscoring the threat to health-care workers striving to cope with the pandemic, Thomas said 300 Ochsner employees were under quarantine, including 60 diagnosed with COVID-19.

Hospitals, laid-off workers and struggling companies will receive badly needed economic aid under the record-setting relief bill approved by the U.S. Senate late on Wednesday in a 96-0 vote.

Democratic House Speaker Nancy Pelosi said she expects that her chamber will approve the bill in a strong bipartisan vote on Friday. President Donald Trump has said he would sign the bill into law.

Americans should receive direct deposits for financial aid within three weeks as soon as the bill is signed into law, the U.S. Treasury Secretary Steven Mnuchin said on Thursday.

Jobless claims soared to a record 3.3 million on Thursday, nearly five times the previous weekly record of 695,000 from the recession of 1982.

The report may understate the problem as the official statistics typically have not included the self-employed or independent contractors. Federal Reserve Chair Jerome Powell said the United States already "may well be in recession."

Powell warned that reactivating the economy would have to wait until the virus was under control, despite Trump's stated desire to resume economic activity by Easter, April 12.

"The first order of business will be to get the spread of the virus under control and then resume economic activity," Powell told NBC's Today Show. As It Happens7:32Uninsured U.S. cancer patient with COVID-19 says $50K hospital bill might bankrupt her
Danni Askini had to fight tooth and nail just to get tested for the coronavirus. Now she's fighting to cover the cost of her treatment. 7:32

Powell said he expects economic activity "to resume and move back up in the second half of the year," but that the board was paying attention to the warnings of experts like Fauci.

The U.S. military, meanwhile, has decided it will stop providing some of the more granular data about coronavirus infections within its ranks.

U.S. Defence Secretary Mark Esper said he wanted some of the more mission-specific information to be withheld to prevent compromising operational security.

"I'm not going to get into a habit where we start providing numbers across all the commands and we come to a point six, seven weeks from now where we have some concerns in some locations and reveal information that could put people at risk," said Esper.

Officials told Reuters there are more domestic cases than among forces overseas.

About 85 per cent of confirmed coronavirus cases in the air force were of personnel in the U.S., while the navy said roughly 90 per cent of its cases were located domestically.

Esper noted that commanders overseas have greater ability to impose restrictions on the movement of troops and their families.