The wire coat hanger symbolizes a dark era of abortion rights. Advocates say it's time to retire it

The wire coat hanger is a symbol of darker days, when abortion was illegal and the options to terminate an unwanted pregnancy was unsafe, even deadly. Reproductive rights advocates say it's time to put the imagery back into the closet.

While visually powerful, some say the symbol misrepresents the reality of abortion today

You could see them held high in the air from among the crowd of protesters marching outside the U.S. Supreme Court, after the conservative-majority justices ruled to overturn Roe v. Wade and the constitutional right to have an abortion last month. Across the country, they were waved in hands that were sometimes painted blood red; they were carried and emblazoned with messages reading: "Not approved for medical use" or simply "Never Again."

The wire coat hanger is seen as a symbol of darker days, when abortion was illegal and the options to terminate an unwanted pregnancy were unsafe — even deadly.

Though it may be effective at evoking unease and stoking anger, advocates for reproductive rights and those who provide abortion services say it's time to put the imagery back into the closet.

Her clinic stopped providing abortions on June 24, immediately after the Supreme Court decision came out. Like others, Taylor is waiting to see which state law will take precedence, which may affect the care that she can offer.

But one thing is clear, she says: The so-called coat hanger abortion is not making a comeback.

Symbol of a dangerous past — not the future

"The idea that we're going to have swaths of our population inflicting harm upon themselves with instruments and apparatuses to terminate a pregnancy is just not an accurate reflection of what the situation is now," said Taylor.

"This coat hanger imagery is something that is more harmful than helpful, especially to people who have experiences, or have loved ones, or have family history and stories of people who have suffered during those times before abortion was safe," she said.

The "graphic simplicity" of the imagery is what makes it such a prominent and effective symbol of the pro-choice movement, explained Martha Paynter, a registered nurse in Halifax who works in abortion and reproductive health care, and the founder and director of the health and justice organization Wellness Within.

"[It] refers to this idea that without legal, clinical, hospital-based abortion … people will take matters into their own hands and use various methods, including [inserting] sharp, penetrating objects through the cervix," she said.

1 month ago
Duration 2:44
Dr. DeShawn Taylor, an obstetrician and gynecologist who runs an independent abortion clinic, explains why using a coat hanger to protest for abortion rights can do more harm than good.

Before abortion was legalized, such dangerous — and desperate — measures resulted in uterine perforation, hemorrhage, sepsis and sometimes death.

But the legal options today, where available, are safe: surgical abortions, more accurately known as aspiration abortions, and medical abortions, which use a combination of the drugs mifepristone and misoprostol.

The power of the pills

Medical abortion in particular has changed the landscape; it can be self-managed at home, Paynter noted, without having to go into a clinic. The two-pill regimen — which can prescribed via telemedicine in some jurisdictions — is approved for use in pregnancies up to 10 weeks, accounting for almost ninety per cent of all abortions in the U.S.

The pills are now used in more than half of abortions in the U.S., according to the Guttmacher Institute. And as of late last year, the U.S. Food and Drug Administration (FDA) allows the medication to be distributed by mail.

Advocates say that should help some pregnant people skirt around their states' bans and self-manage their abortions, though some Republican-led states are trying to outlaw the mailing of the pills.

At the same time, the number of U.S. clinics that perform abortions has also dropped, according to the Guttmacher Institute. The figure sits around 800, down from a peak of over 2,000 locations in the early 1990s.

That's all the more reason why reproductive rights activists should "put down the coat hangers and pick up the pills" — to better inform people safe options exist, said Renee Bracey Sherman, the founder and executive director of We Testify, a Washington-based organization dedicated to the leadership and representation of people who have abortions.

The coat hanger not only represents "a lack of information" about safe options, she said, it also "plays into [the] hands" of the anti-abortion movement.

"They want people to think that their only option is a dirty coat hanger," she said. "So something radical, and fighting fire with fire, is the pills."

While pictures of pills may be better from a public health information standpoint, the anti-abortion movement often has the upper hand when it comes to "powerful" and attention-grabbing imagery, said Carol Sanger, a law professor at Columbia University who specializes in reproductive rights and author of the book About Abortion: Terminating Pregnancy in the 21st Century.

The visual weapon of choice on that side: the fetus.

Sanger said the invention and widespread use of the ultrasound actually ended up transforming abortion politics.

There is also the more-graphic imagery, purporting to show aborted fetuses, that anti-abortion groups have been known to use and even distribute in unsolicited flyers mailed to people's homes.

"The images are used, oftentimes, to really begin the conversion of youth and to bring youth into this extremist movement," she said. "With this inflamed rhetoric and flat-out lies about what the images depict, it's this very aggressive, coercive manipulation."

For Bracey Sherman, there is something else that stands out about the depictions of fetuses on placards and billboards: they're almost always white.

The anti-abortion movement itself is "overwhelmingly made up of white people," she said, even though "the majority of people have abortions in the United States are people of colour."

Data from the Kaiser Family Foundation (KFF) showed Black and Hispanic people accounted for 59 per cent of people who had abortions in 2020 (38 per cent and 21 per cent, respectively), while 33 per cent were white.

In the wake of the ruling, Bracey Sherman said some of the anti-abortion protesters outside the Supreme Court shouted racial epithets at her and other pro-choice demonstrators of colour. Ironically, she said, some of those same people were carrying signs with an image of a heart surrounding a pregnant Black woman and the message "Love Them Both."

"I am the Black woman that you are supposedly loving … and yet they treat us with such denigration and disdain," she said.

Bracey Sherman said she counters that by proudly wearing a T-shirt bearing the words "I had an abortion," which she did, at 19. She calls the experience "the best health care" she's ever received, saying she felt listened to at the time. She was in a toxic relationship then, she said, and knew she didn't want to be pregnant.

Ultimately, being open about experiences and sharing information about safe options for abortions is more powerful than waving a coat hanger, said Bracey Sherman.

It's why she would like to see another slogan stricken from the discourse around reproductive rights.

"I hate, with a passion, the phrase 'Safe, legal and rare,'" she said, explaining it stigmatizes those who have had abortions, when it's something that is quite common.

According to the Guttmacher Institute, 18 per cent of pregnancies ended in abortion in 2017.

Taylor said she also finds the term "back alley abortion" to be like "fingernails on a chalkboard." It not only induces fear, she said, but it diminishes the work that midwives, physicians and others have done — at times risking their livelihoods — to help secure "much-needed abortion care to people who were desperate," in the pre-Roe v. Wade era.

"I come from that inspiration of people who saw providing abortion as a very caring thing to do," she said. "Despite the risk to, you know, to their freedom." 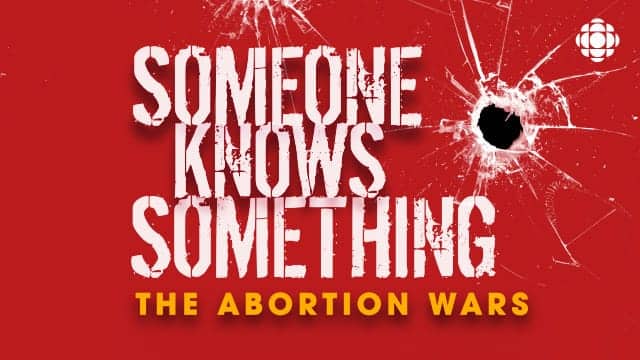 32:21S7 E1: Aiding, Abetting, Abortion
Access to abortion has taken on urgency as the laws protecting it come under attack in the U.S. Working with family member Amanda Robb, David examines the murder of her uncle, an abortion provider in the U.S., and the resulting conviction of a fanatical sniper. Both discover that this murder may be the endgame of a series of doctor shootings that actually began in Canada.

Nick Logan is a senior writer with CBCNews.ca based in Vancouver. He has worked as a multi-platform reporter and producer for more than a decade, with a particular focus on international news. You can reach out to him at nick.logan@cbc.ca.