A convicted war criminal from Croatia swallowed what he said was poison and died Wednesday after a United Nations court in the Netherlands upheld his 20-year sentence for committing crimes against humanity during the Bosnian war of the 1990s.

A convicted war criminal from Croatia swallowed what he said was poison and died Wednesday after a United Nations court in the Netherlands upheld his 20-year sentence for committing crimes against humanity during the Bosnian war of the 1990s.

In a stunning end to the final case at the UN's International Criminal Tribunal for the former Yugoslavia, former Croatian general Slobodan Praljak yelled, "I am not a war criminal!" in a courtroom and then drank from a small bottle.

Medical staff at the tribunal in The Hague rushed to Praljak's side before he was taken to a local hospital, where he died, tribunal spokesperson Nenad Golcevski told reporters at the court.

The courtroom where the dramatic scene unfolded was sealed off. Presiding Judge Carmel Agius said it was now a "crime scene" and Dutch police would investigate. Police in The Hague declined to comment on the case.

Dutch police, an ambulance and a fire truck quickly arrived outside the court's headquarters and emergency service workers, some of them wearing helmets and with oxygen tanks on their backs, went into the court shortly after Praljak fell ill. 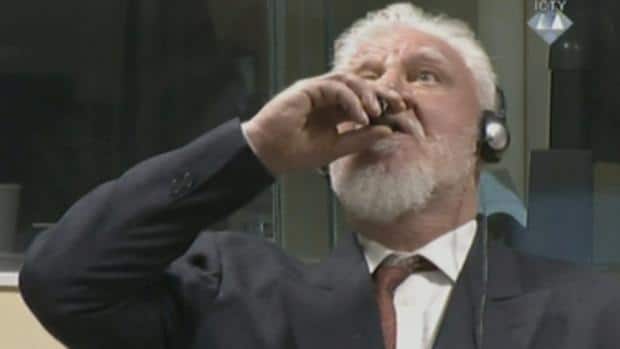 3 years ago
0:28
Slobodan Praljak dies after court upholds his 20-year sentence for war crimes against Muslims 0:28

Praljak and five other former Bosnian Croat officials were convicted as part of a criminal plan to carve out a Bosnian Croat mini-state inside Bosnia in the early 1990s. All had their guilty verdicts sustained by the UN's war crimes court Wednesday.

Praljak, 72, had been in the tribunal's custody before the hearing. Poison has not yet been identified as the cause of his death, and it was not clear how he would have gotten access to a lethal substance or managed to smuggle it into the courtroom.

A lawyer who has frequently defended suspects at the war crimes court told The Associated Press it would be easy to bring poison into the court.

Prominent Serbian lawyer Toma Fila said security for lawyers and other court staff "is just like at an airport." Security officers inspect metal objects and confiscate cellphones, but "pills and small quantities of liquids" would not be registered, Fila said.

Praljak was a Bosnian Croat writer and film and theatre director turned wartime general. His indictment said he also worked as a professor of philosophy and sociology.

He was found guilty of crimes that included murder, persecution and inhumane treatment as part of the plan to drive Muslims out of a would-be Bosnian Croat territory in Bosnia.

The judge overturned some of Praljak's convictions, but upheld others and left his sentence unchanged.

After Praljak heard his 20-year sentence, he swallowed what he told the court was poison. Agius immediately shut down the hearing and cleared the courtroom.

The hearing later resumed and ultimately, all six Croats charged in the case had their sentences, ranging from 25 to 10 years, confirmed.

The other suspects showed no emotion as Agius reconfirmed their sentences for their involvement.

In the past, two Serbs have taken their lives while in the tribunal's custody.

In July 1998, Slavko Dokmanovic, a Croatian Serb charged with in the deaths of over 200 Croat prisoners of war, was found dead in his prison cell in The Hague. Milan Babic, a wartime Serbian leader who was closely co-operating with prosecutors, took his life in a prison tribunal cell in March 2006.

Wednesday's hearing was the final case at the groundbreaking tribunal before it closes its doors next month. The tribunal, which last week convicted former Bosnian Serb military chief Gen. Ratko Mladic of genocide and other crimes, was set up in 1993, while fighting still raged in the former Yugoslavia. It indicted 161 suspects and convicted 90 of them.

The appeals judges upheld a key finding that Croatia's late president Franjo Tudjman was a member of the plot to create a Croat mini-state in Bosnia. The finding angered Croatian leaders, but was largely overshadowed by Praljak.

The original trial began in April 2006 and provided a reminder of the complex web of ethnic tensions that fuelled fighting in Bosnia and underlies frictions in the country even today.

Croatian Prime Minister Plenkovic said that his country's leadership during the Bosnian war could "in no way be connected with the facts and interpretations" in the appeals judgment.