Activists say convoy was hit delivering aid west of Aleppo, Russians say it was only a cargo fire 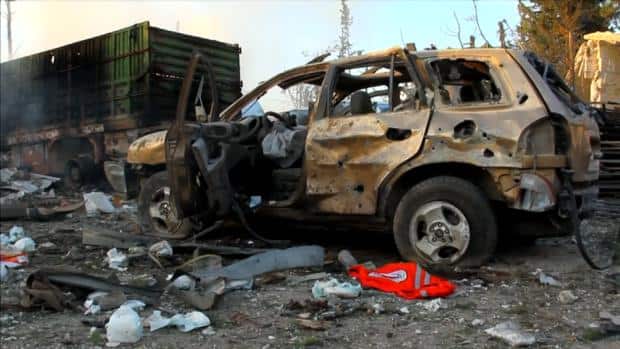 The attack plunged Syria's U.S.-Russia-brokered ceasefire further into doubt. The Syrian military, just hours earlier, had declared the week-long truce had failed. The United States said it was prepared to extend the truce deal and Russia — after blaming rebels for the violations — suggested it could still be salvaged.

In Geneva, spokesman Jens Laerke of OCHA said further aid delivery would hold pending a review of the security situation in Syria in the aftermath of the airstrike. Laerke called it "a very,very dark day … for humanitarians across the world."

The UN aid co-ordinator said the Syria government had granted needed authorizations in recent days to allow for aid convoys to proceed inside Syria. Humanitarian UN aid deliveries had stalled in recent weeks amid continued fighting, and the truce had not paved the way for expanded convoys as initially expected.

The confirmed death toll on Tuesday stood at one Syrian Arab Red Crescent (SARC) staff member and "around 20 civilians," the SARC and Red Cross said in a joint statement.

"If this callous attack is found to be a deliberate targeting of humanitarians, it would amount to a war crime," UN aid chief Stephen O'Brien said in a statement calling for an immediate and independent investigation.

At a meeting of the UN General Assembly on Tuesday, Secretary General Ban Ki-moon denounced the "sickening, savage and apparently deliberate attack" on the aid convoy.

Ban blames the Syrian government for most deaths and says it "continues to barrel bomb neighbourhoods and systematically torture thousands of detainees."

He said countries "that keep feeding the war machine also have blood on their hands" and accused unnamed governments attending the UN meeting of ignoring, facilitating, funding, planning and carrying out "atrocities" against civilians on all sides.

Only a cargo fire

It wasn't clear who was behind the attack late on Monday, which sent a red fireball into the sky in the dead of night over a rural area in Aleppo province. Both Syrian and Russian aircraft operate over Syria, as well as the U.S.-led coalition that is targeting the Islamic State group.

The Russian Defence Ministry rejected claims of an airstrike and said the convoy had caught fire.

"We have studied video footage from the scene from so-called 'activists' in detail and did not find any evidence that the convoy had been struck by ordnance," spokesman Igor Konashenkov said in a statement.

"There are no craters, and the exterior of the vehicles do not have the kind of damage consistent with blasts caused by bombs dropped from the air."

Konashenkov said damage to the convoy visible in footage was instead the direct result of its cargo catching fire which he said had "oddly" occurred at the same time as militants had started a big offensive in nearby Aleppo.

The convoy, part of a routine interagency dispatch operated by the Syrian Red Crescent, was hit in rural western Aleppo province.

The Syrian Civil Defence, the volunteer first responder group also known as the White Helmets, posted images of a number of vehicles on fire and a video of the attack showed huge balls of fire in a pitch black area, as ambulances arrive on the scene.

UN officials said the UN and Red Crescent convoy was delivering assistance for 78,000 people in the town of Uram al-Kubra, west of the city of Aleppo. Initial estimates indicate that about 18 of the 31 trucks in the convoy were hit, as well as the Red Crescent warehouse in the area.

When asked who was behind the airstrikes, Rami Abdurrahman of the Britain-based Syrian Observatory for Human Rights, which tracks the civil war said Syrian President Bashar al-Assad's "regime does not have the capabilities to carry out such airstrikes within two hours."

He said the airstrikes on Aleppo province, including the ones that hit the convoy, were part of some 40 air raids that lasted about two hours — starting at about 7:30 p.m. Monday — and that "it was mostly Russian warplanes who carried out the air raid."

Al-Halaby said that rebels in Aleppo province also claimed Russian aircraft were behind the attack.

Abdurrahman said the convoy of about 30 trucks had crossed earlier from a government-controlled area and were hit from the air hours after they reached the Red Crescent warehouse. He said that some of the trucks were already emptied when the attack occurred and that in all, 20 trucks were destroyed or damaged.

A paramedic, speaking in a video released by Aleppo 24 News, a media collective, blamed Russian and government warplanes as well as Syrian army helicopter gunships that he said dropped barrel bombs.

Piles of white bags filled with flour were seen near one of the trucks.

Jan Egeland, humanitarian aid co-ordinator in the office of the UN envoy for Syria, told The Associated Press in a text message that the convoy was "bombarded."

Egeland added: "It is outrageous that it was hit while offloading at warehouses."

UN Humanitarian Chief Stephen O'Brien called on "all parties to the conflict, once again, to take all necessary measures to protect humanitarian actors, civilians, and civilian infrastructure as required by international humanitarian law."

A Red Crescent official in Syria confirmed the attack, but said no further information was available.

Also Tuesday, the Observatory said government forces launched an offensive in the Handarat area, just north of the city of Aleppo, in what appears to be an attempt to tighten the siege on rebel-held parts of Syria's largest city.

Apart from the 21 killed in the convoy attack, 22 civilians died in attacks Monday across the province, according to the Observatory and Aleppo 24 News.