Political opposition to Prime Minister Boris Johnson's plan to suspend Parliament began to crystallize Thursday amid protests, legal action and a petition, which had already gathered more than one million signatures, to block the move.

Political opposition to Prime Minister Boris Johnson's plan to suspend Parliament began to crystallize Thursday amid protests, legal action and a petition, which had already gathered more than one million signatures, to block the move.

The prime minister said the Queen approved suspending Parliament for 32 days, from Sept. 12 to Oct.14, the day Johnson asked her to deliver her speech outlining the government's legislative agenda.

Johnson's manoeuvre gives his political opponents even less time to prevent a chaotic no-deal Brexit before the Oct. 31 withdrawal deadline. But the decision outraged critics and is serving as a unifying force for the disparate opposition, who have confirmed they will press on with measures to block a departure from the European Union without a deal despite Johnson's actions.

"We will seek to try and put through the appropriate legislation in this constrained timetable that the government has now put before us," said Barry Gardiner, the opposition Labour Party's spokesperson on international trade.

Labour Party Leader Jeremy Corbyn told Sky News that Parliament will move quickly to try to block a no-deal Brexit, saying "we believe we can do it."

"Voters are being deprived of the opportunity to have their representatives hold the Government to account, make any key decisions, and ensure that there is a lawful basis for any action that is taken," the statement says.

"It is our view that there is a majority in the House of Commons that does not support this prorogation, and we demand that the Prime Minister reverses this decision immediately or allows MPs to vote on whether there should be one."

Meanwhile, a pair of Conservatives resigned Thursday — with one directly citing Johnson's move. George Young, the government's chief whip in the upper House, said in a letter to the leader of the House of Lords that Johnson's move undermines Parliament, and he's unhappy with the timing and length of the prorogation and its motivation.

"I have been unpersuaded by the reasons given for that decision, which I believe risks undermining the fundamental role of Parliament at a critical time in our history, and reinforces the view that the government may not have the confidence of the House for its Brexit policy," he said.

The letter was posted on Twitter by the BBC.

Scottish Conservative leader Ruth Davidson, who has differed with Johnson in the past, also resigned Thursday. Although the popular leader cited family reasons, the timing of such a decision following Johnson's seismic move suggested she disagreed with his tactics.

"These are the most divisive years since the referendum that I can remember in my lifetime, and I lived through the miner strike in the 1980s which was pretty heavy," singer and activist Billy Bragg told CBC News Network's Heather Hiscox.

Bragg also likened Johnson's plan to the actions of King Charles I, the monarch whose feud with Parliament in part led to the English Civil War and, eventually, his execution.

"I think [Johnson's] woken everybody up to the reality that he's just going to ram this through. And as I said, the last bloke who tried to do that, we chopped his head off," Bragg said. 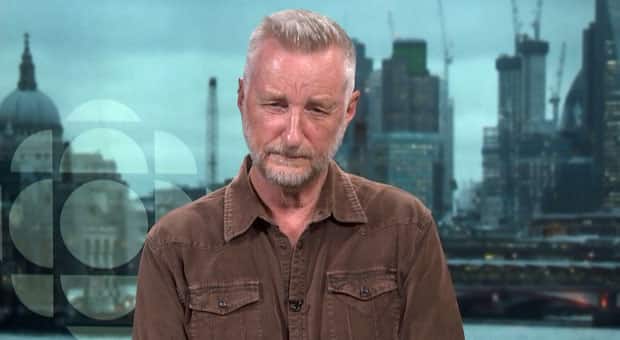 1 year ago
0:35
Singer and activist Billy Bragg discusses the U.K. PM's plan to suspend Parliament and likens him to King Charles I. 0:35

Thousands packed College Green outside Parliament on Wednesday evening, waving EU flags and placards to express their anger. Smaller rallies took place in other towns and cities while 25 bishops from the Church of England released an open letter with their worries about the "economic shocks" of a no-deal Brexit on the poor and other vulnerable people.

Since the petition has garnered more than one million signatures, it's guaranteed it will be considered for debate.

As well, legal challenges loom. Lawmakers already are asking a Scottish court to rule that suspending Parliament is illegal. Gina Miller, an entrepreneur who won a ruling in the Supreme Court in 2017 that stopped the government from triggering the countdown to Brexit without a vote in Parliament, has another legal challenge in the works.

"This is completely constitutional and proper," he said. "There is going to be a lot of time to debate before Oct. 31."

The move has prompted ruptures across the political spectrum, including among members of Johnson's Conservative Party. Senior Conservative lawmaker Ken Clarke was among those in the party describing the suspension of Parliament as "absurd."

"He has just given in to the fanatic element of his followers and decided to go hell for leather," Clarke said. "I hope it will bring together the sensible majority of Parliament who will find some alternative."

The outpouring of fury followed three years of tensions after the 2016 referendum on EU membership in which 52 per cent of voters favoured withdrawing.

The EU is adamant it will not renegotiate the agreement struck with then prime minister Theresa May on the terms of the U.K.'s departure and the framework of future relations.

Without such a deal, Britain faces a chaotic Brexit that economists warn would disrupt trade by imposing tariffs and customs checks between Britain and the bloc, send the value of the pound plummeting and plunge the U.K. into recession. May resigned in defeat after failing — three times — to secure Parliament's backing for her divorce deal with the bloc.

Johnson has told European officials it won't be possible to agree a deal on Britain's departure from the bloc without the removal of controversial language on a "backstop" aimed at avoiding the return of a border between EU member Ireland and Britain's Northern Ireland. He said at the close of the G7 summit in Biarritz, France, on Monday that he was "marginally more optimistic" of progress.