U.S. President Donald Trump confirmed reports late Thursday that the United States abruptly called off preparations for a military strike against Iran over the downing of a U.S. surveillance drone hours earlier, saying on social media that the response was "not proportionate."

U.S. President Donald Trump confirmed reports late Thursday that the United States abruptly called off preparations for a military strike against Iran over the downing of a U.S. surveillance drone hours earlier, saying on social media that the response was "not proportionate."

The swift reversal was a stark reminder of the serious risk of military conflict between U.S. and Iranian forces as the Trump administration combines a "maximum pressure" campaign of economic sanctions with a buildup of American forces in the region. As tensions have mounted in recent weeks, there've been growing fears that either side could make a dire miscalculation that leads to war.

At the request of the U.S., the UN Security Council will hold a closed meeting about Iran at 3 p.m. Monday.

A U.S. official, who was not authorized to discuss the operation publicly and spoke on condition of anonymity, had told The Associated Press the targets would have included radars and missile batteries.

"We were cocked and loaded to retaliate last night on 3 different sights when I asked, how many will die," Trump tweeted Friday.

Trump said he was told about 150 people, and called off the strike "10 minutes" before it would have taken place. The president added the administration will continue to apply pressure on the Iranian regime, and "biting" economic sanctions were having an effect.

....On Monday they shot down an unmanned drone flying in International Waters. We were cocked &amp; loaded to retaliate last night on 3 different sights when I asked, how many will die. 150 people, sir, was the answer from a General. 10 minutes before the strike I stopped it, not....

....proportionate to shooting down an unmanned drone. I am in no hurry, our Military is rebuilt, new, and ready to go, by far the best in the world. Sanctions are biting &amp; more added last night. Iran can NEVER have Nuclear Weapons, not against the USA, and not against the WORLD!

The downing of the U.S. drone — a U.S. navy RQ-4A Global Hawk, an unmanned aircraft with a wingspan larger than a Boeing 737 jetliner and costing over $100 million US — prompted accusations from the U.S. and Iran about who was the aggressor. Iran insisted the drone violated Iranian airspace; Washington said it had been flying over international waters.

The New York Times first reported Trump had approved the strikes before calling them off. The newspaper cited anonymous senior administration officials.

The military operation was called off around 7:30 p.m. ET, after Trump had spent most of Thursday discussing Iran strategy with top national security advisers and congressional leaders.

"I agree with your decision to not use military force against Iran. In the future, you should ask questions about how many people will die before you order a strike in the first place," said Lieu.

On Friday, the head of Iran's Revolutionary Guard's aerospace division told Iranian state television that Iran had warned a U.S. military surveillance drone several times before launching a missile at it.

Hajizadeh then said at a later news conference attended by AP in Tehran that Iran chose not to target a manned U.S. spy plane flying near the drone.

Hajizadeh said: "At the same moment, another spy aircraft called a P8 was flying close to this drone. That aircraft is manned and has around 35 crew members. Well, we could have targeted that plane, it was our right to do so, and yes it was American, but we didn't do it. We hit the unmanned aircraft."

Iranian officials also displayed what they said was debris from the surveillance drone.

The U.S. military's Central Command did not immediately respond to a request for comment on the claim.

Major airlines from around the world Friday began rerouting their flights to avoid areas around the Strait of Hormuz.

The Federal Aviation Administration warned of a "potential for miscalculation or misidentification" in the region. United Airlines, British Airways, Australia's Qantas, Dutch carrier KLM and Germany's Lufthansa all said they would reroute where necessary.

Air Canada told CBC News in an emailed statement that the impact of the latest developments on existing routes was "none to minimal." 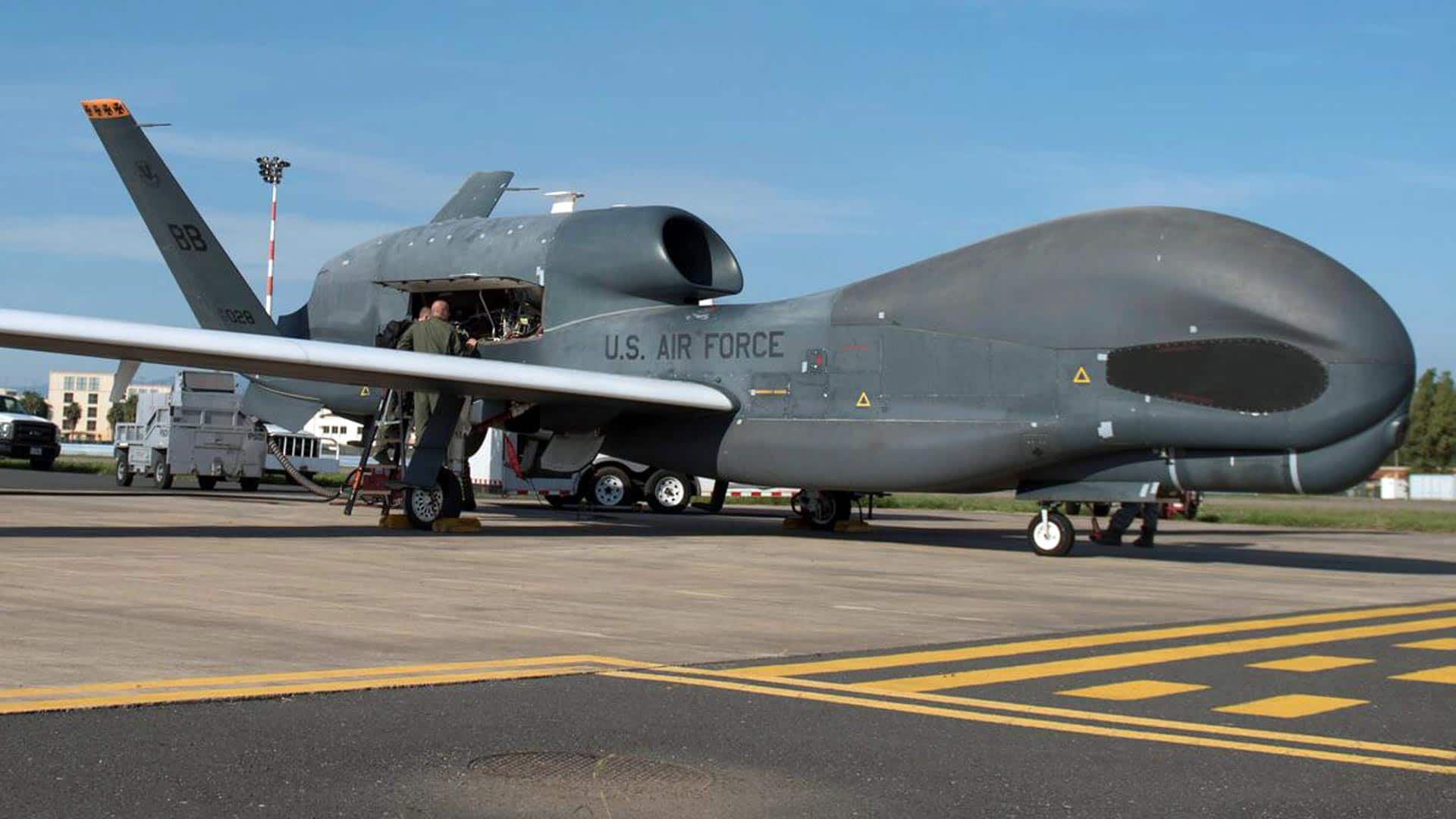 1 year ago
1:59
Donald Trump downplayed Iran's downing of a U.S. military drone, saying he suspected it was shot by mistake. 1:59

The FAA previously warned of a risk in the region, but Friday's warning threw into stark relief a danger that both the agency and analysts say is real after the shooting down of a Malaysian Airlines flight over Ukraine in 2014. That could further imperil the bottom lines of Gulf long-haul carriers, which already have faced challenges under the Trump administration.

"The threat of a civil aircraft shoot-down in southern Iran is real," warned OPSGROUP, a company that provides guidance to global airlines.

Trump has said he wants to avoid war and negotiate with Iran over its nuclear ambitions.

"I find it hard to believe it was intentional, if you want to know the truth," Trump said Thursday at the White House.

He said the drone was "clearly over international waters." It would have "made a big, big difference" if someone had been inside, he said.

Trump summoned his top national security advisers and congressional leaders to the White House for a briefing on Thursday, including Secretary of State Mike Pompeo and National Security Adviser John Bolton.

Pompeo and Bolton have advocated hardline policies against Iran, but Adam Schiff, the chairman of the House intelligence committee, said "the president certainly was listening" when congressional leaders at the meeting urged him to be cautious and not escalate the already tense situation.

Republican Mitch McConnell, the majority leader from Kentucky, praised the administration for "measured responses," but his Democratic counterpart, Chuck Schumer of New York, worried that the White House "may bumble into a war."

The Trump administration has been putting increasing economic pressure on Iran for more than a year. It reinstated punishing sanctions following Trump's decision to pull the U.S. out of an international agreement intended to limit Iran's nuclear program in exchange for relief from earlier sanctions.

The other world powers who remain signed on to the nuclear deal have set a meeting to discuss the U.S. withdrawal and Iran's announced plans to increase its uranium stockpile for June 28, a date far enough in the future to perhaps allow tensions to cool.