Twitter's ban on Donald Trump is the start of what could be a generation-defining debate. Calls to regulate online disinformation arrived swiftly after an attack on the U.S. Capitol driven in part by far-fetched conspiracy theories. The decisions made next will leave a lengthy trail that stretches beyond the U.S., writes CBC's Alexander Panetta.

Sacking of U.S. Capitol building was wake-up call for democracies on disinformation

One historical legacy of the earth-shaking political week in Washington, D.C., is that it immediately thrust us into a fork-in-the-road moment for the dissemination of online information.

Moves to regulate social media are swiftly taking shape in what could produce a generation-defining policy debate with consequences extending beyond the United States.

The obvious catalyzing force for this intensified discussion is the attack on the U.S. Capitol on Wednesday that illustrated how unfiltered conspiracy theories might threaten even the oldest of democracies.

At pro-Donald Trump rallies this week in Washington, a common thread among participants was universal distrust in mainstream news and a desire to find information elsewhere.

What some people are finding is scary.

One rally-goer fumed that she had to seek out her own information when news organizations failed to cover stories about Democratic president-elect Joe Biden's son's laptop during the campaign — and, in her view, they're still ignoring, along with most politicians, allegations of election fraud.

"They're asking for a civil war. Why? It all started with the media," Tina Hewitt said in an interview.

One Ohio woman predicted that Biden would never become president. Carol Byler, who came to Washington by bus with a group of friends to attend a pro-Trump rally, said: "He won't make it. There will be upheaval."

Members of the Ohio group cited unfounded theories about impossible 140 per cent voter turnout rates or ballot-stuffing caught on video, and when it was mentioned that these claims had been debunked even by Republican officials who control swing states, one scoffed: "Traitors."

Mainstream news reports hardly do justice to how unmoored some of the chatter was, and the idea that a half-dozen states conspired to pilfer the presidential election was but the most visible layer of a matryoshka doll of conspiracies.

Within it lay subsets of more deeply far-fetched ideas: that a Chinese communist-FBI-CIA plot decided the election or that Trump's Republican betrayers were secretly part of a Satan-worshipping pedophile ring, or that Vice-President Mike Pence would be executed for treason.

It goes beyond politics. A speaker at one pro-Trump rally this week called the coronavirus scare a hoax and demanded that members of the almost entirely unmasked crowd hug each other in order to prove it.

As they left the downtown area in a subway car, another group of people shared links from their phones to obscure websites carrying stories about Pence similar in tenor to the QAnon conspiracy that tend to get pulled off bigger sites such as Facebook.

WATCH | What is the QAnon conspiracy theory: 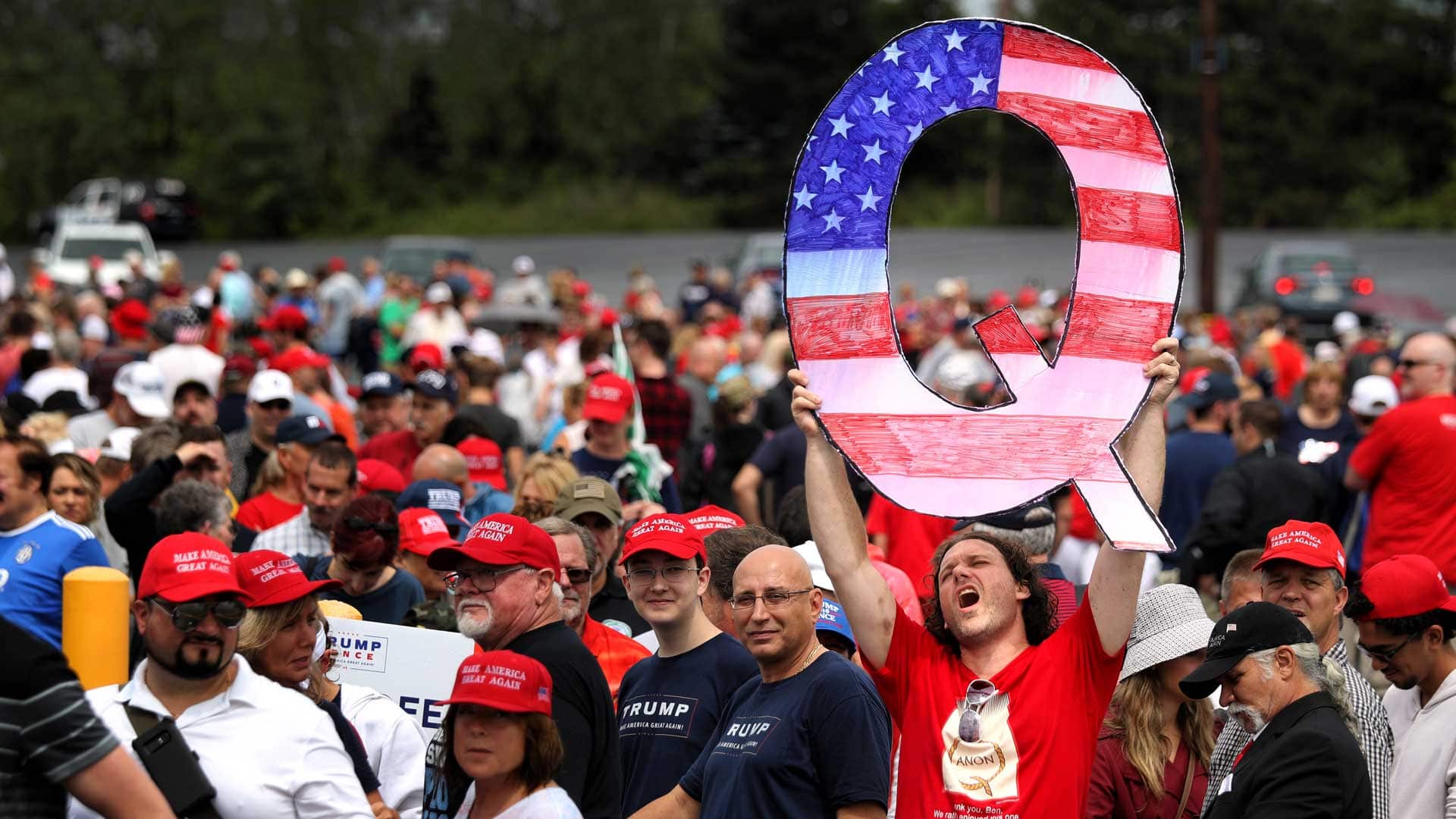 3 years agoVideo
2:12
CBC News looks at its origins and how QAnon supporters could impact U.S. politics in the months ahead. 2:12

This was on Wednesday, right after the Capitol riot had cost the life of one of the people involved. Ashli Babbitt, a San Diego veteran, was shot and killed by police while charging into the building with other rioters. She left behind a social media trail laden with QAnon-themed conspiracies.

The immediate fallout has already triggered consequential debates — about corporate liability, free speech and regulation in the Wild West of online communication.

Consider the fallout on Friday alone.

A policy debate that will ripple outside the U.S.

Twitter suspended the personal account of the president of the United States; the platform where Donald Trump launched 1,000 controversies now says it's worried about some violent chatter it's seeing on the upcoming presidential transition and fears Trump will stoke it.

Meanwhile, a rival social media company, Parler, that prides itself on being a free-speech alternative and is awash in calls for violence, has been deleted or threatened with deletion by Google and Apple, the dominant phone-app stores.

That has prompted a free-speech outcry. Republicans say these companies should be stripped of legal immunity that helped them flourish and be treated like traditional publishers, such as a newspaper, which can be sued for an editorial decision.

One such threat came from Republican Sen. Lindsey Graham.

Some more video of Lindsey Graham being called a “traitor” by Trump supporters at the Reagan airport while surrounded by security. <br><br> <a href="https://t.co/2vZjYSWyk5">pic.twitter.com/2vZjYSWyk5</a>

Earlier in the day, Graham had personally weathered a torrent of verbal abuse from Trump fans. They surrounded him in an airport on Friday morning, berating him for voting to certify Biden's win.

The online insults against him included the spread of a doctored photo purported to show him palling around with terrorist Osama bin Laden; that was on the Parler site, which Friday afternoon had about 1,500 messages under just one hashtag about executing politicians for treason.

But make no mistake: Graham has company in his call for regulation, and it goes beyond his party. Democrats are also keen on reform, though we'll soon see what shape the debate takes and whether the parties will agree on specifics.

It's Democrats who now have the most power, which was consolidated this week with the win of two Georgia seats that gave them control of the Senate. 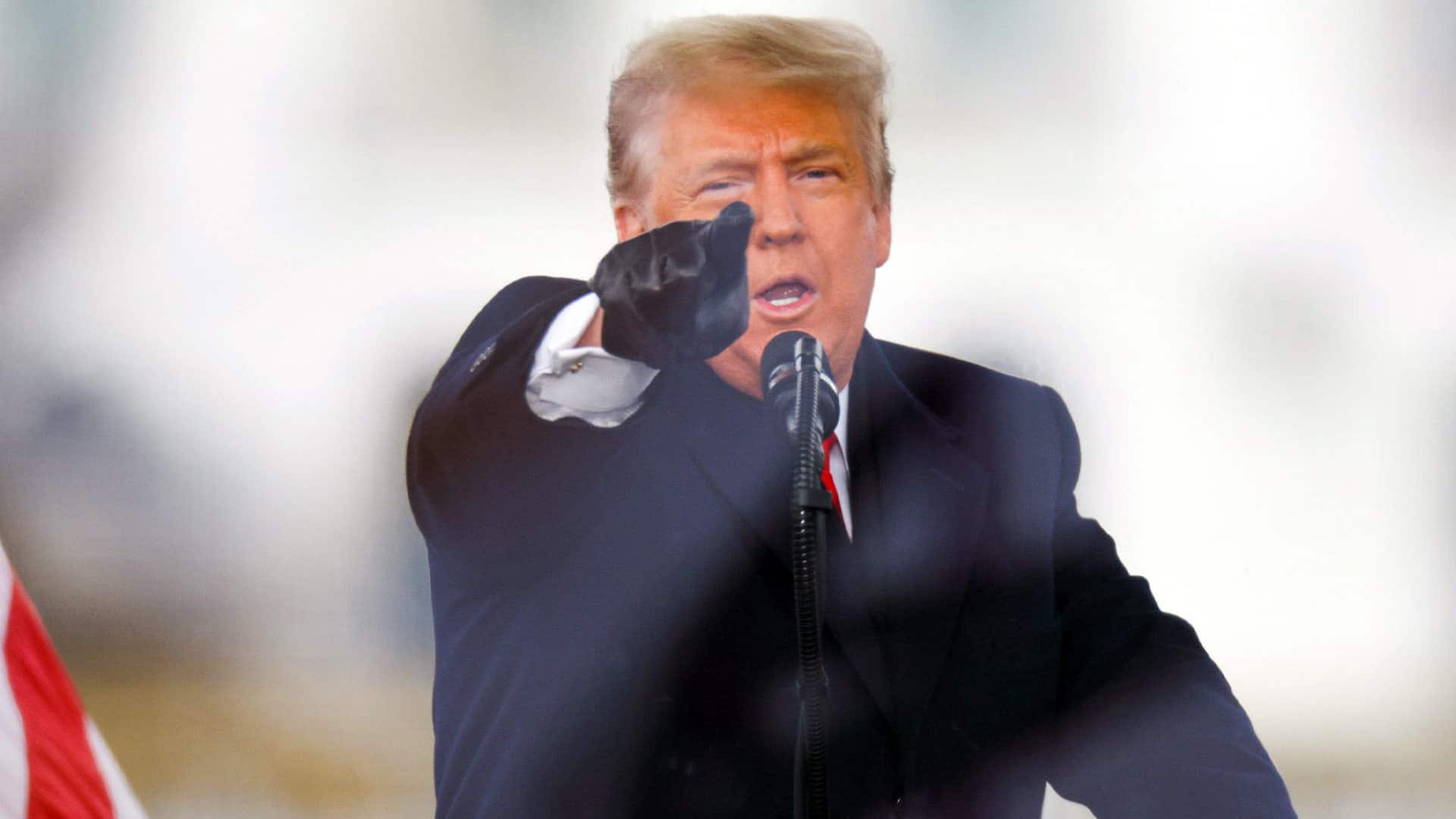 2 months agoVideo
3:03
Thirteen people are charged in Wednesday's mob attack on the U.S. Capitol as new articles of impeachment are drawn up — including one accusing Donald Trump of inciting insurrection. Twitter permanently suspended Trump’s account, citing the risk of “further incitement of violence." 3:03

The top Democrat on the Senate intelligence committee, Mark Warner of Virginia, issued a warning on the website Politico that social media companies need to prepare for consequences after Wednesday's events: "This is going to come back and bite 'em because Congress, in a bipartisan way, is going to come back with a vengeance."

A few hours after that story appeared online, Twitter banned Trump, while Parler was being threatened by smartphone companies.

All of these debates will have cross-national implications, including on the U.S.'s neighbours, because policy decisions in the biggest jurisdiction tend to trickle down.

Take the new North American trade agreement, for example. The 2018 deal has language modelled on the old U.S. law that created the liability shield, Section 230 of the U.S. Communications Decency Act.

A real-life practical impact of this old protection finds itself in the post-election aftermath: Voting-machine companies that have been accused of rigging the election have, for example, begun suing people and warning Fox News and other outlets, but it cannot sue the tech platforms.

On the eve of the Washington riot, Savannah Boylan said in an interview that she was worried online conspiracies were taking their toll on democracies.

"It's like we're talking past each other. It's really hard to have common facts," said Boylan, an expert on Canada-U.S. relations who now runs an Atlanta-based pro-democracy NGO and has written about news polarization.

"It's really starting to erode the democracy of the United States."

Boylan cited the collapse of local news and the rise of online algorithms that lead people to read more and more extreme, sensational things.

Policing the online world risks having a whack-a-mole quality, where one crackdown effort leads to a resurfacing elsewhere

Take the case of pro-Trump lawyer Lin Wood, whose social media feeds are cesspools of slander. He was kicked off Twitter after accusing Pence of being part of a child-abusing pro-China cabal and suggesting he be executed.

Yet his message was reimported to Twitter by others.

People cross-pollinating Wood's slander even include politicians, such as Angela Stanton, a former Republican congressional candidate once pardoned by Trump for a past crime.

Another politician, a Republican lawmaker from West Virginia, was arrested Friday for allegedly invading the Capitol. A former Pennsylvania state politician who narrowly lost a U.S. congressional race and now traffics in online conspiracies was forced to resign his teaching position after posting on Facebook about storming the Capitol.

If there's one thing suggested by these past few weeks, it's that online hoaxes are as much as a demand-side problem as a supply-side one.

Meaning, if people want it, they'll find it.

For example, Fox News has come in for verbal tongue-lashings at Trump events for not backing his false fraud claims enthusiastically enough.

People heckled a Fox reporter at a Trump speech in Georgia last month and lined up to pose for pictures with the rising stars of a new right-wing information ecosystem.

The emerging celebrities at that rally were people with hundreds of thousands of social media followers who accept donations on their personal websites and who are activist-commentators.

They have been aggressively pushing false stolen-election narratives and threatening to end the career of Republican politicians not fighting on Trump's behalf.

One of the sought-out figures drawing kudos that night was a man who went on to organize this week's "Stop the Steal" rallies in Washington.

After this week's events ultimately degenerated into a deadly debacle, the organizer, Ali Alexander, said he did not support the invasion of the U.S. Capitol.

But he made a defiant prediction that click-generating, pro-Trump activists like him will continue to exist in an inexhaustible supply.

"If you hurt me, 1,000 more will rise up," Alexander said in an online video statement.

With files from Katie Simpson