Turkey may be held responsible for war crimes over executions in Syria, UN warns

As Syrian forces push further into Kurdish-held territory, capturing the border town of Manbij, the United Nations is warning Turkey it could be held responsible for executions of captured Kurdish fighters and a politician by an affiliated armed group, saying the acts may amount to war crimes.

As Syrian forces push further into Kurdish-held territory, capturing the border town of Manbij, the United Nations is warning Turkey it could be held responsible for executions of captured Kurdish fighters and a politician by an affiliated armed group, saying the acts may amount to war crimes.

Turkey and its Syrian rebel allies launched a military offensive into Kurdish-held parts of the northeast, saying it aims to defeat the Kurdish YPG militia, which Turkey sees as terrorists for its links to separatists.

The Kurdish-led Syrian Democratic Forces (SDF) accused Turkey-backed fighters of killing a Kurdish politician in an ambush on a road in northern Syria on Saturday. A Turkey-backed rebel force denied the killing and said it had not advanced that far.

The UN had received reports that Hevrin Khalaf, a Kurdish politician, was executed on the same highway by the same group on the same day, he said, adding that summary executions may amount to war crimes.

"Turkey could be deemed responsible as a state for violations by their affiliated groups as long as Turkey exercises effective control of these groups or the operations in the course of which those violations occurred," Colville told a news briefing.

"We urge Turkish authorities immediately to launch an impartial, transparent and independent investigation and to apprehend those responsible, some of whom should be easily identifiable from the video footage they themselves shared on social media."

UN war crimes investigators would follow up on all incidents, Colville added.

At least four civilians, including two journalists, were killed and dozens injured when a convoy was hit by a Turkish airstrike on the Syrian town of Ras al-Ayn on Sunday, Colville said.

The UN human rights office had reports of alleged air and ground strikes on five health facilities by Turkish forces and affiliated groups. It had reports of attacks on civilian infrastructure, including power lines, water supplies and bakeries, he said.

Turkish authorities have reported 18 civilians were killed in Turkey, including a nine-month-old baby, by cross-border mortar and sniper fire by Kurdish fighters, he said.

Syrian government forces entered the centre of the once Kurdish-held northern town of Manbij, about 30 kilometres south of the Turkish border, and raised the national flag, Syrian state media say.

Syrian President Bashar al-Assad's forces had left the area at the height of the civil war, leaving it to the Kurdish groups.

The flashpoint area housed U.S. troops who patrolled the region since 2017 to deter a confrontation between Turkey and Kurdish fighters.

This is our nightmare scenario.- Made Ferguson, Mercy Corps' Syrian deputy country director

A U.S. military spokesperson, Col. Myles B. Caggins, confirmed U.S. troops had completed their pullout from Manbij. During the withdrawal, contacts were kept open with the Turks and Russians to ensure the several hundred American forces there got out safely, U.S. officials said.

U.S. troops have had outposts in Manbij since 2017, when they went in to avert a battle over the town between Turkish and Kurdish fighters.

One Turkish soldier was killed and eight others were wounded on Tuesday after Kurdish fighters defended their position in Manbij, Turkey's Defence Ministry said. At least 15 fighters had been "neutralized" in retaliation, the ministry said. 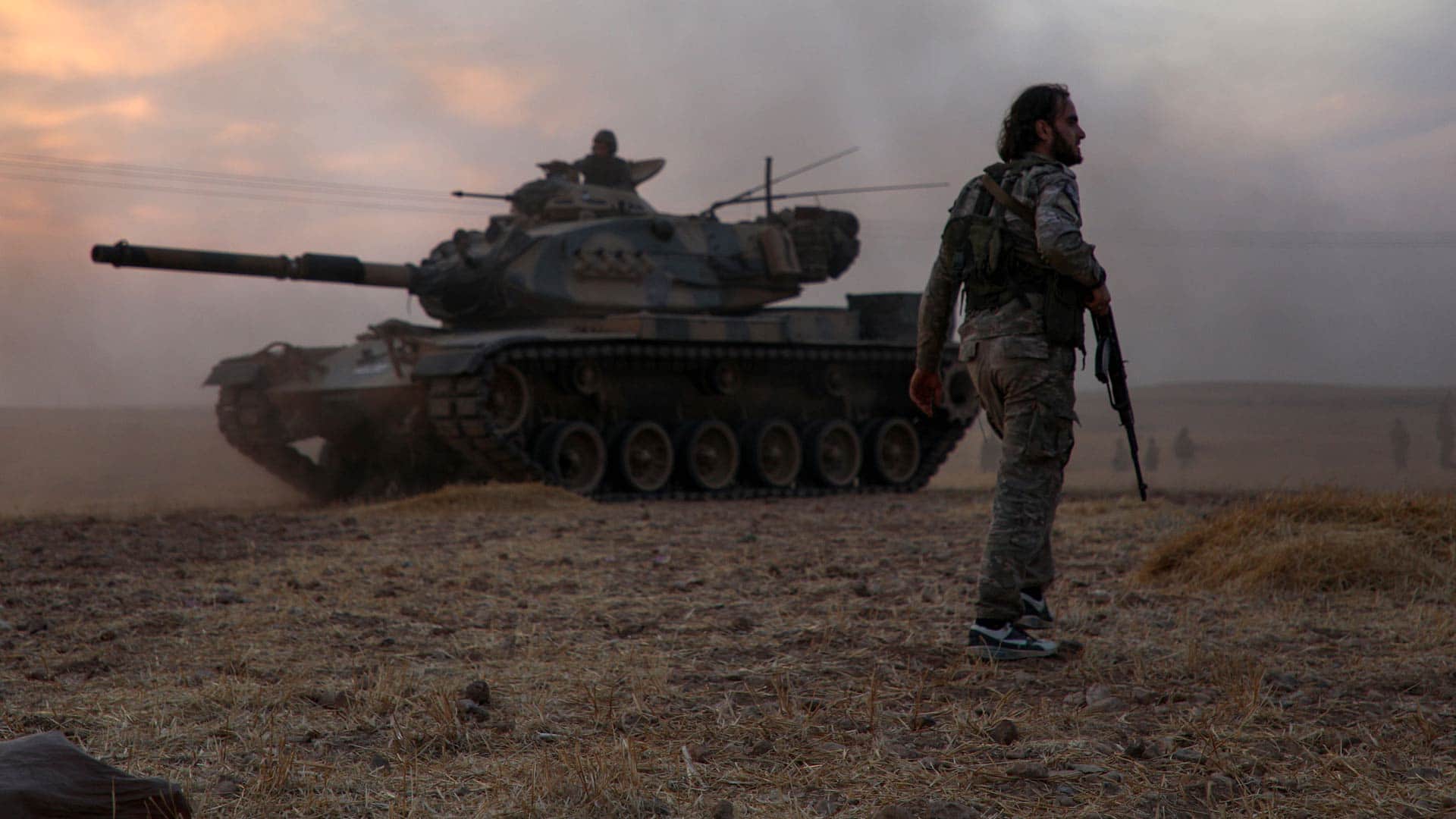 Lives threatened in Syria as armies advance on both sides

1 year agoVideo
1:39
Russian-backed Syrian forces pushed into Kurdish-held territory after U.S. troops withdrew — setting up a potential clash with Turkey’s forces and threatening the lives of those caught in the middle. 1:39

The UN Security Council planned a closed meeting Wednesday on the situation, requested by Germany and other EU members.

"Everybody hopes that ... we can do something to bring back the parties to the peace process," said the current Security Council president, South Africa's UN Ambassador Jerry Matjila.

Doctors Without Borders (DWB) said Tuesday it had also suspended most of its medical aid activities in the region and was evacuating all international staff in the wake of airstrikes and violence.

"The decision to suspend the majority of DWB's activities comes as the humanitarian situation spirals further out of control and needs are likely to increase," the aid organization said in a statement. 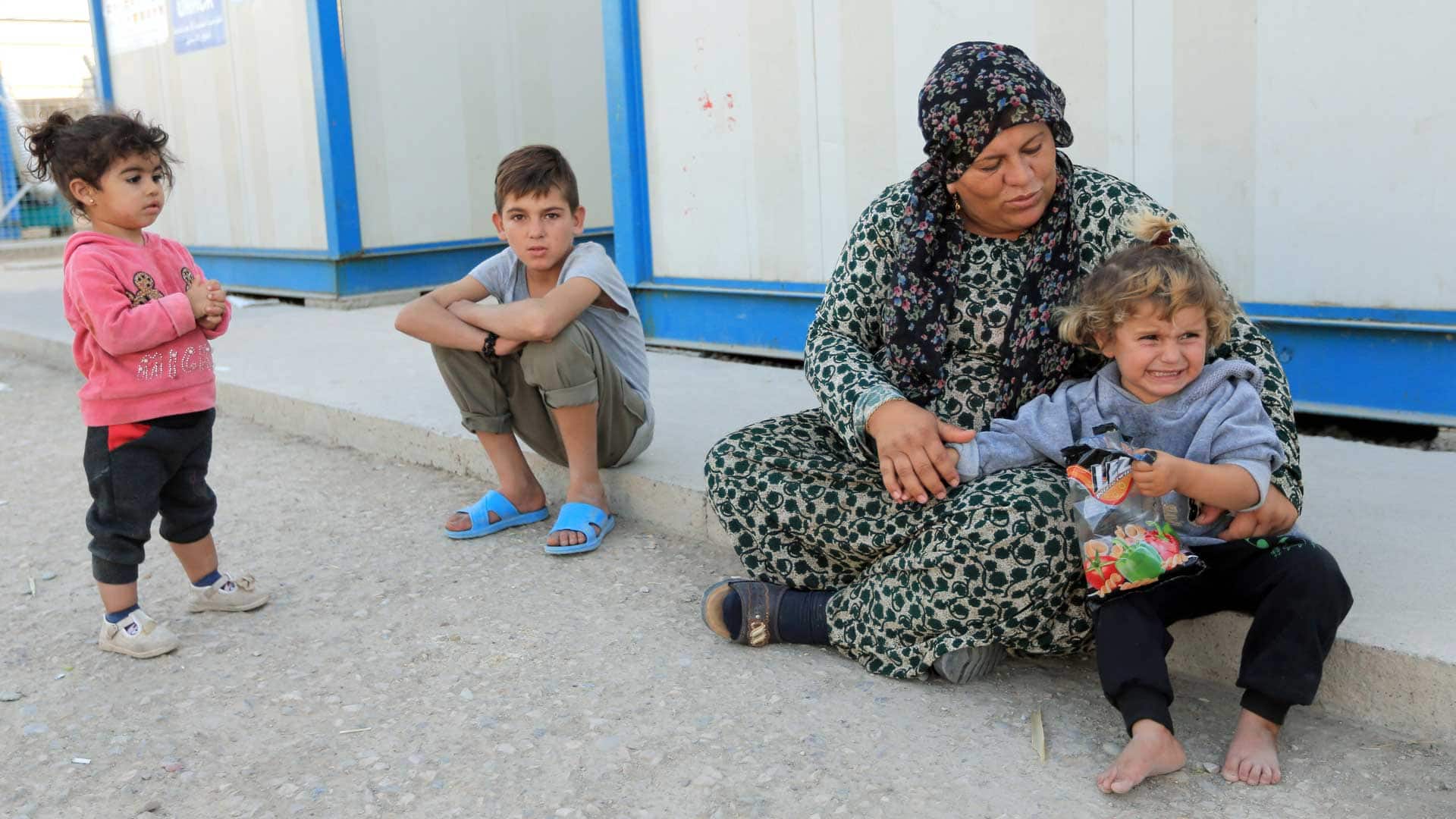 1 year agoVideo
2:16
Hundreds of Syrians are trying to seek refuge from the latest military attacks by Turkish forces in refugee camps in northern Iraq. Margaret Evans spoke to some of those refugees. 2:16

Trump said Tuesday he is fully prepared to destroy Turkey's economy if its leaders continue what he calls "this dangerous and destructive path" in Syria.

On Monday, Trump announced a halt to negotiations on a $100-billion US trade deal with Turkey. Other sanctions include raising steel tariffs back up to 50 per cent and actions against three senior Turkish officials and Turkey's defence and energy ministries.

The U.S. is calling on Turkey to stop its invasion of Syria and declare a ceasefire in the assault.

A U.S. official said the approximately 1,000 U.S. troops being withdrawn will reposition in Iraq, Kuwait and possibly Jordan.

Trump is sending Vice-President Mike Pence and national security adviser Robert O'Brien to Ankara as soon as possible in an attempt to begin negotiations with Kurdish forces in Syria.