At least 38 people, most of them tourists, are reported dead after a gunman opened fire on the beach between two hotels in the Tunisian resort town of Sousse. Another 36 are wounded. A gunman disguised as a tourist opened fire at a Tunisian hotel on Friday with a weapon he had hidden in an umbrella, killing at least 38 people, including British, German and Belgian tourists as they lounged at the beach and pool in the popular resort town of Sousse.

Tunisia Health Ministry spokesman Choukri Nafti said another 36 people were wounded in Friday's attack and two or three of them are in critical condition.

The SITE Intelligence Group reported later that the Islamic State in Iraq and Syria claimed credit for the Tunisia attack on its Twitter account and identified the gunman as Abu Yahya al-Qayrawani.

Nafti said there was a shortage of psychological help for survivors of the attack at a hotel in the Mediterranean resort of Sousse.

Terrified tourists ran for cover after the gunfire and an explosion erupted at the Imperial Marhaba, 140 kilometres south of the capital Tunis, before police shot the gunman dead, witnesses and security officials said.

The attack took place during the holy Muslim month of Ramadan, on a day when a decapitated body daubed with Arabic writing was found in France, a suicide bomber killed two dozen people at a mosque in Kuwait, and at least 145 civilians were reported killed by Islamic State militants in northern Syria.

It was the second major attack on Tunisia this year following the Islamist militant assault on Tunis Bardo museum when gunmen killed 21 foreign visitors.

The body of the attacker lay with a Kalashnikov assault rifle where he was shot. Local radio said police captured a second gunman, but officials didn't immediately confirm the arrest or his role in the attack.

There have been no reports of Canadians being involved.

"One attacker opened fire with a Kalashnikov on tourists and Tunisians on the beach of the hotel," said a hotel worker at the site. "It was just one attacker. He was a young guy dressed in shorts like he was a tourist himself."

The man pulled out a weapon he had hidden inside an umbrella he was carrying before opening fire at the beach and pool and tossing an explosive, witnesses said. A security source said another bomb was found on his body. 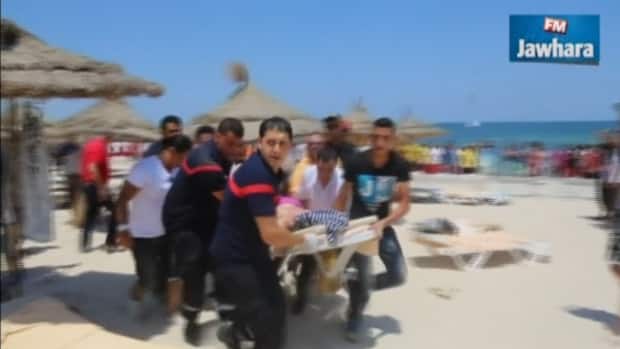 A health ministry statement said British, German and Belgian nationals were among the 37 dead. Six other people were wounded in the shooting, officials said.

Initially, police believed a second man was involved in the attack. But later in the day, officials said they believe there was only one gunman and he was killed in an exchange of gunfire, a security source at the scene said.

Tunisia, which has been hailed as a model of democratic transition since its 2011 "Arab Spring" uprising, is one of the most secular countries in the Arab world. Its beach resorts and nightclubs on the Mediterranean are popular with foreigners.

No one immediately claimed involvement in the shootings, but Islamist jihadists have attacked North African tourist sites before, seeing them as legitimate targets because of their open Western lifestyles and tolerance of alcohol.

Canada mourns with France, Kuwait, Tunisia &amp; Somalia. We'll work w/ our allies to track down those responsible for these acts of terror.

Elizabeth O'Brien, of Ireland, who was staying at a neighbouring hotel with her two sons, said there was panic on the beach when gunfire erupted.

"I honestly thought it was fireworks and then when I saw people running … I thought, my God, it is shooting," she told Irish radio station RTE. "The waiters and the security on the beach started to say 'Run, run, run!'"

Sousse, alongside nearby Hammamet and the island of Djerba, is the heartland of Tunisia's most popular beach resorts, drawing visitors from Europe and neighbouring North African countries like Algeria.

"This is a catastrophe, but we have to stay strong," Tourism Minister Salma Loumi said.

Since its 2011 uprising to oust autocrat Zine el-Abidine Ben Ali, Tunisia has been praised for its peaceful democratic transition bringing free elections and a new constitution seen as a model for the region.

But the country has also struggled with the rise of Islamist movements as ultra-conservative preachers took advantage of the upheaval and young democracy to take over mosques and spread their hardline message.

Several thousand Tunisian jihadists have left the country to fight in Syria, Iraq and neighbouring Libya, where some have set up jihadist training camps and promised to return to attack their homeland.