Obama says he had 'excellent' conversation with Trump at White House

U.S. President Barack Obama met with his successor Donald Trump at the White House today, and said they had an "excellent" and "wide-ranging" conversation. President Barack Obama met with his successor Donald Trump at the White House today, and said they had an "excellent" and "wide-ranging" conversation.

Obama and Trump were in the Oval Office in Washington for more than an hour to discuss the transition of power, following the U.S. election Tuesday that saw the businessman and reality TV star land the top job in his foray into politics.

Obama said he was encouraged by Trump wanting to work with his team on issues facing the country, and that it's important for all "to now come together."

Later, Trump will go to Capitol Hill to talk with congressional leaders about the Republicans' legislative agenda for next year.

Trump's motorcade took a South Lawn entrance into the White House, out of view of television cameras. The full transition of power will officially take place on Jan. 20.

Trump refused to let a group of journalists travel with him to cover his historic first meeting with Obama, breaking a long-standing practice intended to ensure the public has a watchful eye on the nation's leader.

Trump flew from New York to Washington on his private jet without that "pool" of reporters, photographers and television cameras that have travelled with presidents and presidents-elect. Trump's flouting of press access was one of his first public decisions since his election Tuesday.

Trump's meeting with Obama was recorded by the pool of White House reporters, photographers and TV cameras who cover the president.

Their meeting was the symbolic start of the transition from Obama, a Democrat who ushered in a sweeping health-care law and brokered a landmark nuclear accord with Iran, to Trump, a Republican who has promised to wipe away those initiatives.

Michelle Obama was to meet privately in the White House residence with Trump's wife, Melania, while Vice-President Joe Biden was preparing to see vice-president-elect Mike Pence.

Also on Trump's schedule were meetings with House Speaker Paul Ryan of Wisconsin and Senate Majority Leader Mitch McConnell of Kentucky to discuss the Republican legislative agenda. Ryan, who holds the most powerful post in Congress, was a sometime critic of Trump, was slow to endorse him and did not campaign with the nominee. Pence intended to join both meetings.

The anticipated show of civility at 1600 Pennsylvania Avenue contrasted with post-election scenes of protests across a politically divided country. Demonstrators from New England to the heartland and the West Coast vented against the election winner on Wednesday, chanting "Not my president," burning a papier-mache Trump head, beating a Trump pinata and carrying signs that said "Impeach Trump."

Republicans were emboldened by Trump's stunning victory over Hillary Clinton, giving the Republicans control of the White House and both chambers of Congress.

In an emotional concession speech, Clinton said her crushing loss was "painful and it will be for a long time" and acknowledged that the nation was "more divided than we thought."

Still, Clinton was gracious in defeat, declaring: "Donald Trump is going to be our president. We owe him an open mind and the chance to lead." 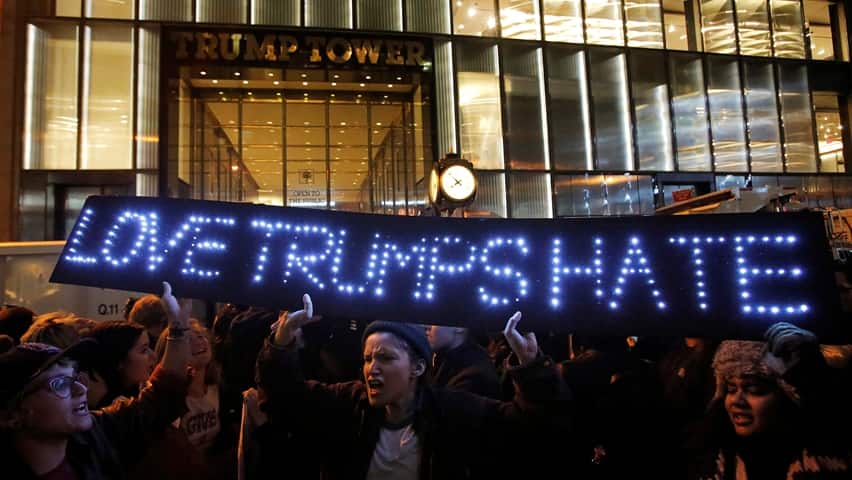 Trump was uncharacteristically quiet in the aftermath of his triumph and made no public appearances Wednesday. He huddled with jubilant, sleep-deprived advisers at his eponymous skyscraper in Manhattan, beginning the daunting task of setting up an administration that will take power in just over two months.

He also met with Pence and took calls from supporters, family and friends, according to spokeswoman Hope Hicks.

In Washington, Trump's scant transition team sprang into action, sifting through personnel lists for top jobs and working through handover plans for government agencies. A person familiar with the transition operations said the personnel process was still in its early stages, but Trump's team was putting a premium on quickly filling key national security posts. The person was not authorized to discuss details by name and spoke on condition of anonymity.

According to an organizational chart for the transition obtained by The Associated Press, Trump was relying on experienced hands to help form his administration. National security planning was being led by former Michigan representative Mike Rogers, who previously worked for the FBI. Domestic issues were being handled by Ken Blackwell, a former Cincinnati mayor and Ohio secretary of state.

As president-elect, Trump is entitled to get the same daily intelligence briefing as Obama — one that includes information on U.S. covert operations, information gleaned about world leaders and other data gathered by America's 17 intelligence agencies. The White House said it would organize two exercises involving multiple agencies to help Trump's team learn how to respond to major domestic incidents.