Donald Trump has been elected the next president of the United States — a remarkable showing by the celebrity businessman and political novice who upended American politics with his bombastic rhetoric. Trump will meet with President Barack Obama on Thursday to discuss his transition to the country's top job.

Trump will be 45th president, oldest 1st-term president, and have Republican led-Senate and House 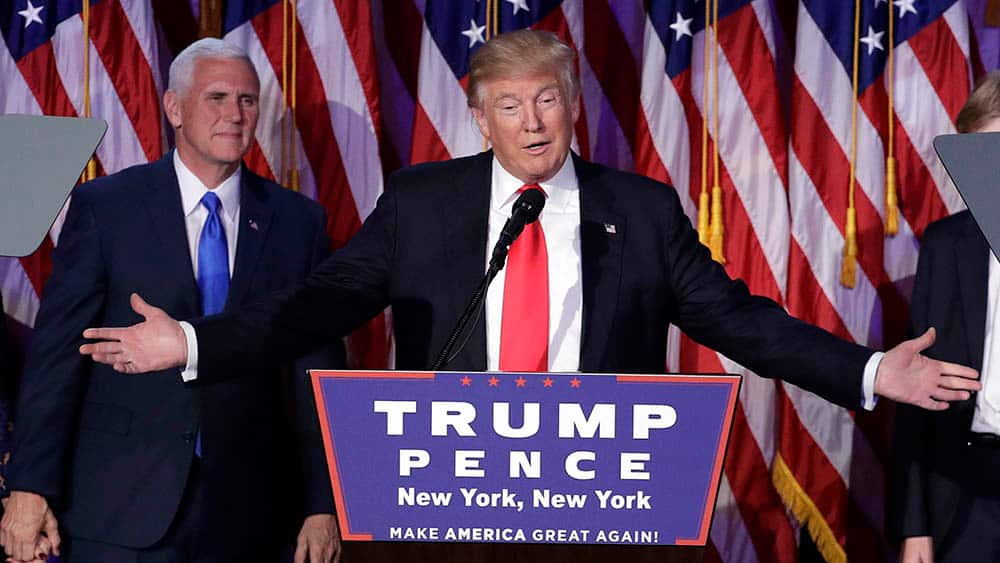 Donald Trump has been elected the next president of the United States — a remarkable showing by the celebrity businessman and political novice who upended American politics with his bombastic rhetoric.

Trump rode an astonishing wave of support from voters seeking sweeping change, capitalizing on their economic anxieties, taking advantage of racial tensions and overcoming a string of sexual assault allegations on his way to the White House.

His triumph over Hillary Clinton will end eight years of Democratic dominance of the White House and threatens to undo major achievements of President Barack Obama. He has pledged to act quickly to repeal Obama's landmark health-care law, revoke the nuclear agreement with Iran and rewrite important trade deals with other countries, particularly Mexico and Canada.

Following his win, and a victory speech in which he pledged, "I will not let you down," Trump said in a tweet Wednesday morning: "The forgotten man and woman will never be forgotten again. We will all come together as never before."

Clinton did not make a public statement until late Wednesday morning, though she called Trump early Wednesday to concede and congratulate him.

Trump deserves "an open mind and a chance to lead," Clinton told a crowd of tearful, cheering supporters around midday Wednesday.

"I hope that he will be a successful president for all Americans," she said. "I'm sorry that we did not win this election for the values we share and the vision we hold for this country."

Obama reacted to Trump's victory by inviting him to meet at the White House on Thursday.

The White House says Obama called Trump from his residence in the White House to congratulate him. White House spokesman Josh Earnest says the Thursday meeting is to discuss the presidential transition.

"The day after, we have to remember that we're actually all on one team," he said. "This is an intramural scrimmage. We're not Democrats first, we're not Republicans first; we are Americans first. We're patriots first. We all want what's best for this country."

"I could not be prouder of her," Obama said in his public remarks Wednesday. "She has lived an extraordinary life of public service. … A lot of Americans look up to her. Her candidacy and nomination was historic and sends a message to our daughters all across the country that they can achieve at the highest levels of politics."

Despite losing the state-by-state electoral battle that determines the presidency, Clinton narrowly led Trump in the nationwide popular vote, according to U.S. media tallies. It marks the second time in 16 years that a Democratic candidate lost the presidency despite winning more votes than the victor. In 2000, Democrat Al Gore got more votes than Republican George W. Bush.

Trump blasted through Democrats' longstanding firewall, carrying Pennsylvania and Wisconsin, states that hadn't voted for a Republican presidential candidate since the 1980s. He needed to win nearly all of the competitive battleground states, and he did just that, claiming Florida, Ohio, North Carolina and others.

The Dow Jones Industrial Average plunged by more than 800 points overnight, but was slightly higher when stock markets opened than it was when it closed before the polls did the day before. The TSX, meanwhile, was up 20 points to 14,676 shortly after open.

A New York real estate developer who lives in a sparkling Manhattan highrise, Trump forged a striking connection with white, working class Americans who feel left behind in a changing economy and diversifying country. He cast immigration, both from Latin America and the Middle East, as the root of the problems plaguing many Americans and tapped into fears of terrorism emanating at home and abroad.

Trump will take office with Congress fully under Republican control. Republican Senate candidates fended off Democratic challengers in key states to maintain the majority. Republicans also maintained their grip on the House.

Senate control means Trump will have great leeway in appointing Supreme Court justices, which could mean a major change to the right that could last for decades.

House Speaker Paul Ryan, a reluctant Trump supporter, called the win "a repudiation of the status quo," and credited Trump with the party's gains in Congress.

"Our House majority is bigger than expected," Ryan said Wednesday. "We won more seats than anyone expected, and much of that is thanks to Trump."

But the election, he admitted, has left the U.S. "sharply divided."

"As we do every four years, we have to work to heal the divisions of the long campaign," he said.

Such a beautiful and important evening! The forgotten man and woman will never be forgotten again. We will all come together as never before

Trump upended years of political convention on his way to the White House, levelling harshly personal insults on his rivals, deeming Mexican immigrants rapists and murderers, and vowing to temporarily suspend Muslim immigration to the U.S.

He never released his tax returns, breaking with decades of campaign tradition, and eschewed the kind of robust data and field efforts that helped Obama win two terms in the White House, relying instead on his large, free-wheeling rallies to energize supporters. His campaign was frequently in chaos, and he cycled through three campaign managers this year.

His final campaign manager, Kellyanne Conway, touted the team's accomplishments as the final results rolled in, writing on Twitter that "rally crowds matter" and "we expanded the map."

The mood at Clinton's party grew bleak as the night wore out, with some supporters leaving, others crying and hugging each other. Top campaign aides stopped returning calls and texts, as Clinton and her family hunkered down in a luxury hotel watching the returns.

At 2 a.m. ET, Clinton campaign chairman John Podesta told the crowd to head home for the night. "We're still counting votes and every vote should count," he said.

Trump will inherit an anxious nation, deeply divided by economic and educational opportunities, race and culture.

Exit polls underscored the fractures: Women nationwide supported Clinton by a double-digit margin, while men were significantly more likely to back Trump. More than half of white voters backed the Republican, while nearly nine in 10 blacks and two-thirds of Hispanics voted for the Democrat.

Doug Ratliff, a 67-year-old businessman from Richlands, Va., had hoped for a Trump win.

"This county has had no hope," said Ratliff, who owns strip malls in the area badly beaten by the collapse of the coal industry. "You have no idea what it would mean for the people if Trump won. They'll have hope again. Things will change. I know he's not going to be perfect. But he's got a heart. And he gives people hope."

Trump has pledged to usher in a series of sweeping changes to U.S. domestic and foreign policy: repealing Obama's health-care law, though he has been vague on what he could replace it with; building a wall along the U.S.-Mexico border; and suspending immigration from countries with terrorism ties.

He's also praised Russian President Vladimir Putin and spoken of building a better relationship with Moscow, worrying some in his own party who fear he'll go easy on Putin's provocations.

Putin sent Trump a telegram to congratulate him on the win. In a brief statement Wednesday, the Kremlin said Putin expressed "his hope to work together for removing Russian-American relations from their crisis state" and his confidence Moscow and Washington could build a "constructive dialogue."

The Republican Party's tortured relationship with its nominee was evident right up to the end. Former president George W. Bush and wife Laura Bush declined to back Trump, instead selecting "none of the above" when they voted for president, according to spokesman Freddy Ford.

Democrats, as well as some Republicans, expected Trump's unconventional candidacy would damage down-ballot races and even flip some reliably red states in the presidential race. But Trump held on to Republican territory, including in Georgia and Utah, where Clinton's campaign confidently invested resources.

Clinton asked voters to keep the White House in her party's hands for a third straight term. She cast herself as heir to Obama's legacy and pledged to make good on his unfinished agenda, including passing immigration legislation, tightening restrictions on guns and tweaking his signature health-care law.

But she struggled throughout the race with persistent questions about her honesty and trustworthiness. Those troubles flared anew late in the race, when FBI Director James Comey announced a review of new emails from her tenure at the State Department. On Sunday, just two days before Election Day, Comey said there was nothing in the material to warrant criminal charges against Clinton.