British lawmakers argue over whether Donald Trump should be excluded from the U.K. for his anti-Muslim remarks, with one legislator cautioning that a ban would give the Republican presidential hopeful a "halo of victimhood."

Legislators call billionaire an attention-seeker, fool but many say he shouldn't be banned

Donald Trump doesn't have many fans in Britain's Parliament.

But a debate among lawmakers on calls to ban Trump from the country revealed little appetite to close Britain's doors to the provocative Republican U.S. presidential contender.

During a three-hour debate Monday, legislators from Britain's main parties stood to call Trump an attention-seeker, a demagogue and a fool. Many, though, argued that he should not be stifled or banned. 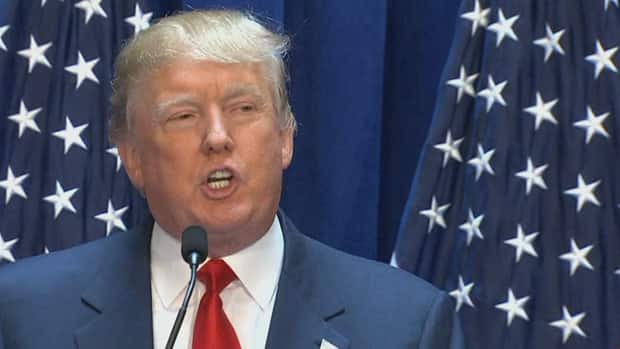 Donald Trump: The Battle of Britain

5 years agoVideo
3:47
Harsh words are being exchanged as Parliament prepares to debate a ban on Donald Trump 3:47

Parliament took up the topic after half a million people signed a petition calling for Trump to be excluded over his call for a temporary ban on Muslims entering the United States in the wake of extremist violence. Trump has also claimed that some areas of Britain are so radicalized that police fear for their lives.

Under British law, any petition supported by 100,000 people — who must each provide and confirm an email address — is considered for parliamentary debate. Monday's debate was intended to air the subject rather than take a vote.

More than 500,000 people have signed an online petition backing a ban on Trump, who owns a golf resort in Scotland, the land of his mother's birth.

"The great danger by attacking this one man is that we can fix on him a halo of victimhood" and boost his popularity among supporters, Flynn said.

But another Labour lawmaker, Tulip Siddiq, supported a ban.

Prime Minister David Cameron has condemned Trump's remarks about Muslims as "divisive, stupid and wrong," but he and other senior officials have said they do not think Trump should be banned.

The government has the power to deny entry to people with criminal convictions or those whose presence is considered not "conducive to the public good." The power has been used against figures as diverse as boxer Mike Tyson, rapper Tyler the Creator, radical Muslim preachers and the late Christian fundamentalist Fred Phelps Sr.

Britain also turned away anti-Islam Dutch legislator Geert Wilders at an airport in 2009. Wilders later sued and won the right to come to Britain.

Several lawmakers argued that banning Trump would betray the principles of free speech.

Conservative Paul Scully said that while people had been excluded from Britain for incitement or hatred, "I have never heard of one for stupidity and I'm not sure we should be starting now."

But Labour's Jack Dromey said Trump was dangerous because he stirred up hatred among different faiths.

"Donald Trump is a fool," Dromey said. "He is free to be a fool. He is not free to be a dangerous fool on our shores."

"Westminster is creating a dangerous precedent on this issue and is sending a terrible message to the world," she said.

Terry Jones, a Florida pastor who tried to organize a Qur'an-burning protest several years ago, was banned from entering.

There is a high level of distaste in London for Donald Trump, CBC's Ellen Mauro reported Monday.

"The mayor of London, for example, said he wouldn't go to some parts of New York City for fear of running into Donald Trump," she said.

"That was in response to comments Trump made about parts of London being so radicalized that police are too afraid to go to them."

There have also been harsh words between Trump and Alex Salmond, former leader of the Scottish National Party.