U.S. President Donald Trump ridiculed the looks and temperament of a female cable television host whose show he says he has stopped watching, days after commenting on the "nice smile" of an Irish reporter.

U.S. President Donald Trump ridiculed the looks and temperament of a female cable television host whose show he says he has stopped watching days after commenting on the "nice smile" of an Irish reporter.

In a series of tweets Thursday morning, the president went after Mika Brzezinski and Joe Scarborough, who have criticized the president on their MSNBC show Morning Joe.

"I heard poorly rated @Morning_Joe speaks badly of me (don't watch anymore). Then how come low I.Q. Crazy Mika, along with Psycho Joe, came … to Mar-a-Lago 3 nights in a row around New Year's Eve, and insisted on joining me. She was bleeding badly from a face-lift. I said no!"

I heard poorly rated <a href="https://twitter.com/Morning_Joe">@Morning_Joe</a> speaks badly of me (don't watch anymore). Then how come low I.Q. Crazy Mika, along with Psycho Joe, came..

...to Mar-a-Lago 3 nights in a row around New Year's Eve, and insisted on joining me. She was bleeding badly from a face-lift. I said no!

Brzezinski responded on Twitter by posting a photograph of a Cheerios box that has the phrase "Made for Little Hands." That was a dig at Trump, who has long been sensitive about the size of his hands.

"It's a sad day for America when the president spends his time bullying, lying and spewing petty personal attacks instead of doing his job," NBC News spokesperson Lorie Acio said in a statement.

It was not immediately clear what set Trump off. About two hours before his tweets, Brzezinski said on the show that "it's not normal behaviour" for any leader to be tweeting about people's appearances or to be bullying, lying, undermining managers and throwing people under the bus.

She said that if any business executive behaved the way Trump does, "there would be concern that perhaps the person who runs the company is out of his mind."

On their Wednesday show, Brzezinski and Scarborough roundly mocked Trump for displaying in several of his golf resorts a fake Time magazine cover featuring himself.

Trump was correct that the MSNBC hosts spent time at the president's Florida resort, a visit that Scarborough said was to arrange a Trump interview.

'This has to stop'

Republicans and Democrats in the Senate and Congress have been critical of the president's latest tweets.

Maine Republican Senator Susan Collins tweeted: "This has to stop — we all have a job — 3 branches of gov't and media. We don't have to get along, but we must show respect and civility."

One of the longest-serving women in Congress called Trump's comments "heinous and vile."

Democrat Nita Lowey of New York said, "The president's behaviour should be repudiated loudly and clearly."

Five-term Republican Representative Lynn Jenkins of Kansas said on Twitter: "This is not okay. As a female in politics I am often criticized for my looks. We should be working to empower women."

Women aren't the only ones coming out against Trump's remarks.

South Carolina Senator Lindsey Graham tweeted: "Mr. President, your tweet was beneath the office and represents what is wrong with American politics, not the greatness of America."

Earlier this week, Trump interrupted a telephone conversation with Ireland's prime minister to compliment an Irish journalist on her "nice smile."

Caitriona Perry is a Washington correspondent and U.S. bureau chief for RTE News-Ireland. She was in the Oval Office with other journalists to document the Tuesday call.

Trump was congratulating Leo Varadkar on becoming prime minister, and mentioned that Irish reporters were among those listening. 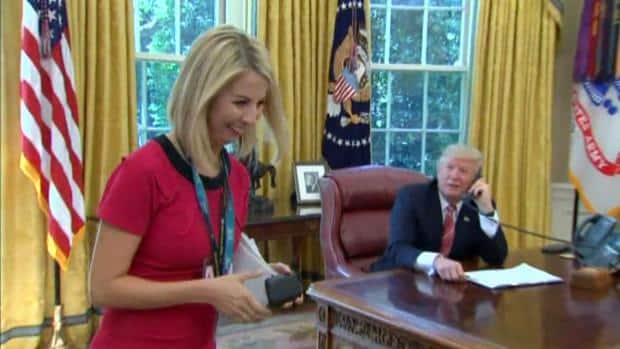 3 years ago
0:25
Remark made during congratulatory phone call to new Irish PM 0:25

Trump then pointed to Perry, called her over to his desk and asked where she was from.

Perry identified herself, and then Trump told Varadkar: "She has a nice smile on her face, so I bet she treats you well."

Video of the encounter is making the rounds on social media.

Perry also tweeted the video. She described the encounter as a "bizarre moment."

This is far from the first time that Trump has drawn criticism for comments about women.

His campaign was threatened last October after the release of a 2005 Access Hollywood video in which he was heard bragging about groping women, saying, "When you're a star, they let you do it. You can do anything."

Trump also repeatedly suggested that Hillary Clinton didn't have the stamina or "look" to be president, mocked primary foe Carly Fiorina by saying "Look at that face! Would anyone vote for that?" and falsely suggested that former Miss Universe winner Alicia Machado, whom he publicly shamed for gaining weight when he owned the contest, had made a sex tape.