In the face of bombshell testimony by Gordan Sondland, the U.S. ambassador to the European Union, at the impeachment hearings Wednesday, the Republican Party formed a defensive crouch around U.S. President Donald Trump and made clear they would defend him to the end.

Republicans brush off bombshell testimony, make clear they will defend president to the end

Donald Trump's impeachment defences seemed damaged by a series of bombshell testimonials that not even his most implacable protectors could easily explain away.

That lasted about 90 minutes.

On Wednesday afternoon, the Republican Party illustrated just how swiftly, and unreservedly, it intends to close ranks around the president and prevent his ouster from office.

This was after a star witness at the televised impeachment hearings, Trump's ambassador to the European Union, appeared to flip on the boss and testified that he was following what he believed were the president's orders in carrying out a quid pro quo.

Gordon Sondland dropped the first payload at 9:39 a.m. ET. He said that in a meeting last May at the White House, where he urged Trump to meet the new leader of Ukraine, the president responded: "Talk with Rudy [Giuliani]."

Sondland said he was displeased to have the president's personal lawyer mucking about on an important bilateral file, and he now regrets acquiescing to the demand.

WATCH | U.S. Ambassador to the EU Gordon Sondland gives some of the most dramatic testimony of the impeachment hearings so far: 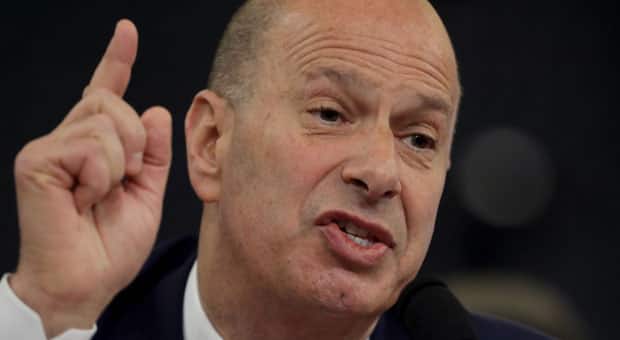 11 months ago
3:35
Highlights of Wednesday's testimony from Gordon Sondland, U.S. ambassador to the EU 3:35

He said Giuliani attempted to establish a quid pro quo — a Latin phrase meaning "something for something" — in which the United States demanded a favour in exchange for giving Ukraine a coveted White House meeting, a valuable signal of U.S. support in the face of a hostile Russian neighbour.

The trade-off was that Ukraine would have to publicly announce two investigations with heavy political implications: one into the 2016 U.S. election, and another into a company linked to the son of Joe Biden, Trump's possible 2020 opponent.

"We knew these investigations were important to the president," Sondland said, before proceeding to implicate numerous members of the administration: "Everyone was in the loop. It was no secret."

WATCH | Sondland explains why he thought he was not the only official who understood there was a quid pro quo: 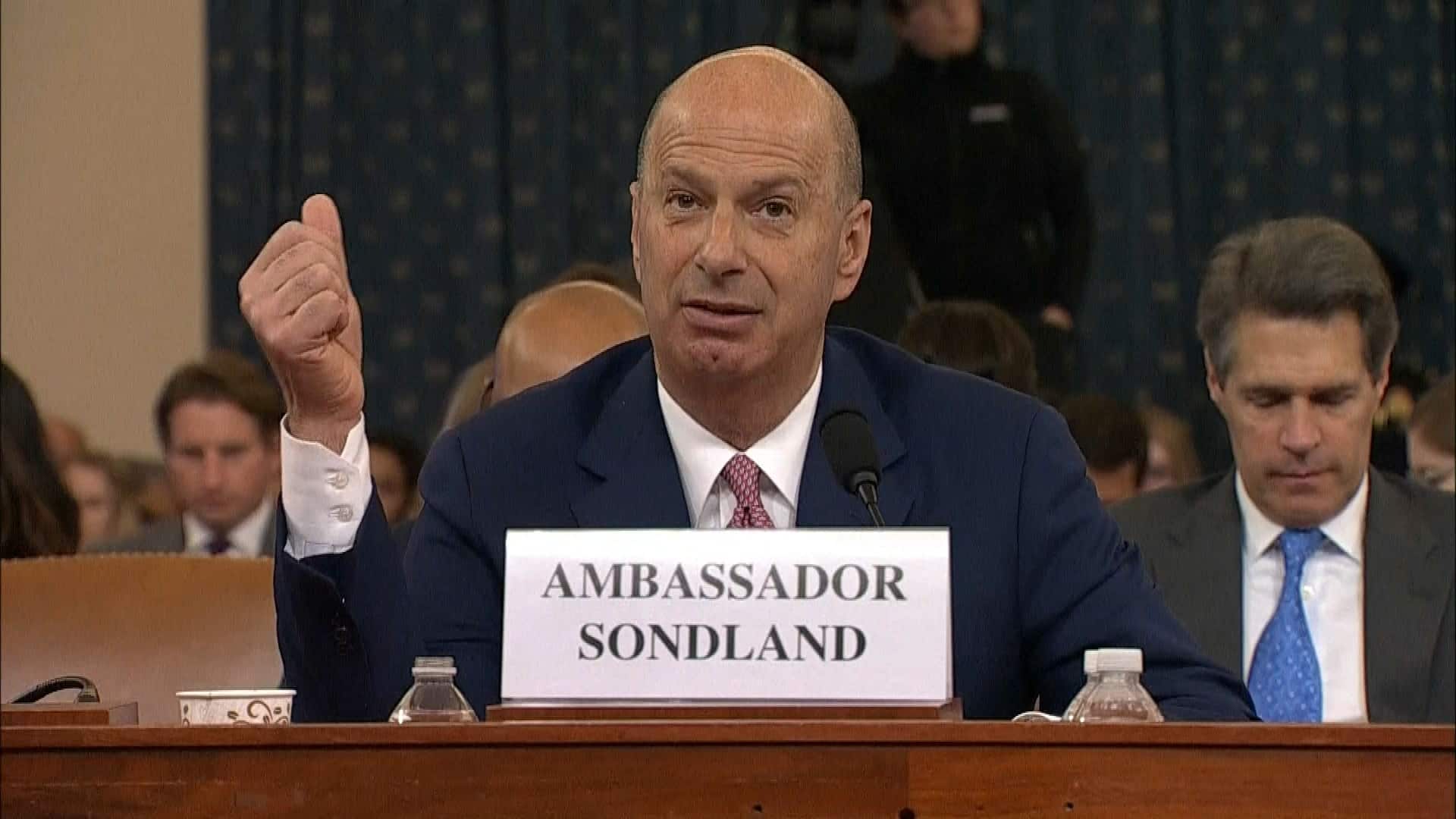 11 months ago
2:07
In his testimony at the impeachment inquiry, EU Ambassador outlines the many senior officials who were in the 'quid pro quo' loop. 2:07

It sounded so bad that even the pundits at Fox News were momentarily perturbed. The network briefly lowered its unflinching guard of the president.

Fox panellist and former independent counsel Kenneth Starr, whose investigation led to the impeachment of President Bill Clinton in 1998, predicted articles of impeachment would be immediately drawn up.

"This, obviously, has been one of those bombshell days," Starr said.

Network news analyst Bret Baier opined, "This, on its face, is very damaging to the arguments the GOP has been making."

For the rest of the day, Republican members of the House intelligence committee pounded back at the witness and exposed vulnerabilities in his testimony.

Sondland granted them an opening. He insisted he'd only drawn his conclusions about a quid pro quo based on his own logical reading of the situation, and not on anything he was actually told by Trump.

When asked why, in conversations later in the summer, Sondland appeared to describe military aid for Ukraine as tied to those investigations, he replied: "My personal belief," and added, "Two plus two equals four."

The wagon-circlers ignored evidence they already have of the president linking the issues — evidence that came from the president himself in the summary of his call with Ukrainian President Volodymyr Zelensky released by the White House.

Meanwhile, Sondland insisted it took him months to realize the Ukrainian company he was pushing to investigate had any connection to the Biden family.

He then tossed the president another lifeline: Sondland said that in their most detailed conversation on the matter, the president specifically told him not to pressure Ukraine.

Democrats insisted this exculpatory anecdote is meaningless. And not just because Sondland, a wealthy political donor-turned-diplomat, has had to correct false testimony before.

It's because by the time that conversation happened, Trump was already under some heat. A few weeks earlier, a letter from a whistleblower, dated Aug. 12, had blown open the Ukraine affair, and the Trump administration was girding itself against impending congressional investigations. 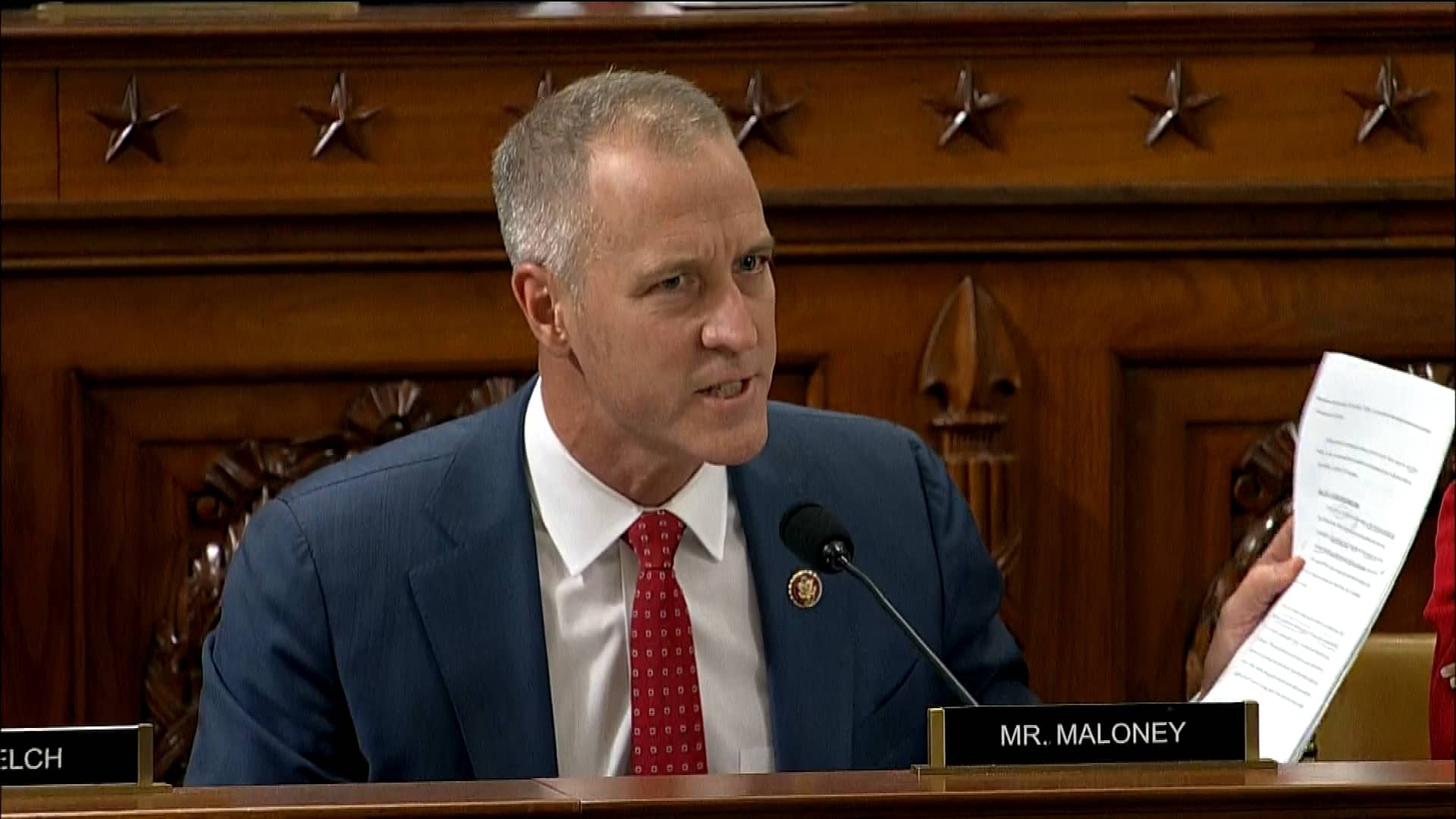 11 months ago
3:32
Tempers got short at the impeachment hearings when Democrat Sean Maloney challenged Gordon Sondland over who would benefit from an investigation of President Trump's political opponent. 3:32

"The veneer has been torn away," Schiff said. "[It's a] very important moment in the history of this inquiry."

But to Republicans it was mission accomplished.

Ohio Republican Brad Wenstrup was among those who spent the afternoon emphatically brushing off the testimony as second-hand speculation.

"Ambassador Sondland, you honestly have used the words 'presumed,' 'presumption,' 'presuming,' some form of the verb 'to presume' repeatedly today," Wenstrup said.

"You see, in mathematics, two plus two does equal four. But in reality, two presumptions plus two presumptions does not equal even one fact. And the fact is the president did tell you … [there was] no quid pro quo."

And that provided Trump supporters with the raw materials they needed to re-erect their defensive wall.

Republican Jim Jordan said Ukraine got three valuable things, despite never announcing an investigation: a call with Trump; a meeting with Trump; and the delayed military aid which was unlocked Sept. 11.

"It's not two plus two," Jordan said, mocking the witness.

WATCH | Republican Jim Jordan tries to get Sondland to admit that he never heard anyone explicitly mention a quid quo pro: 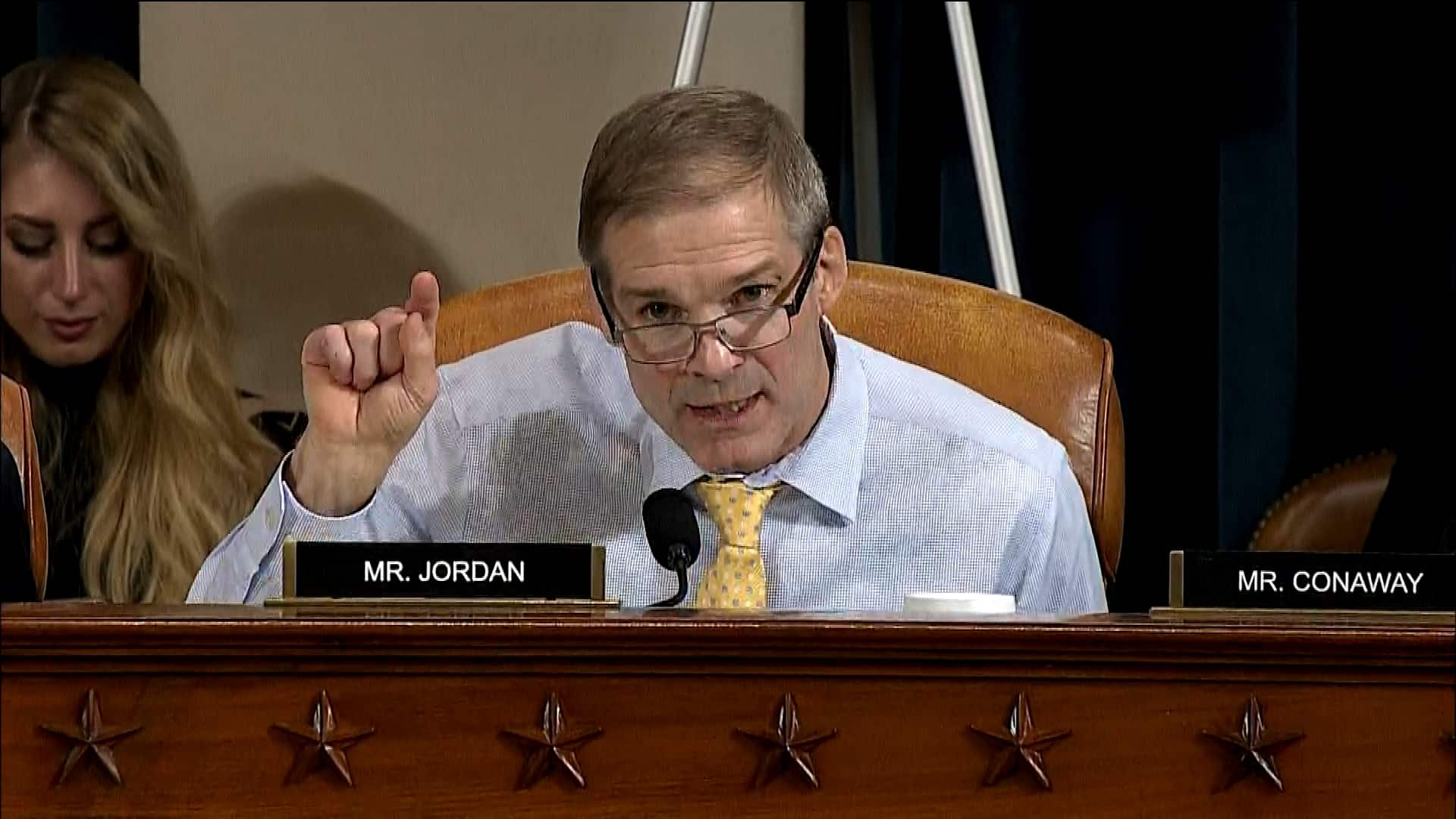 11 months ago
2:04
At the impeachment probe, Rep. Jim Jordan reminded Gordon Sondland that he was never explicitly asked by President Trump to arrange any sort of 'quid pro quo' with Ukraine. 2:04

Within 90 minutes of his earlier, dramatic reaction, Starr was back on the air, tempering his assessment: "Extremely helpful" is how he characterized the cross-examination of Sondland.

By evening, Fox News was mocking other outlets for what it described as over-reacting to Sondland's testimony, and running sound bites of rival programs.

And it seemed once again that Republicans would keep rolling their eyes at impeachment; that Trump's overall approval rating, which has not budged in 18 months, would remain mired in cement; and that if Trump gets impeached by the House, it's almost inconceivable the Republican-led Senate will remove him.

Which would leave the issue in the hands of American voters to litigate, at the ballot box, in a general election less than a year away.

WATCH | Full highlights of Day 4 of the public impeachment hearings: 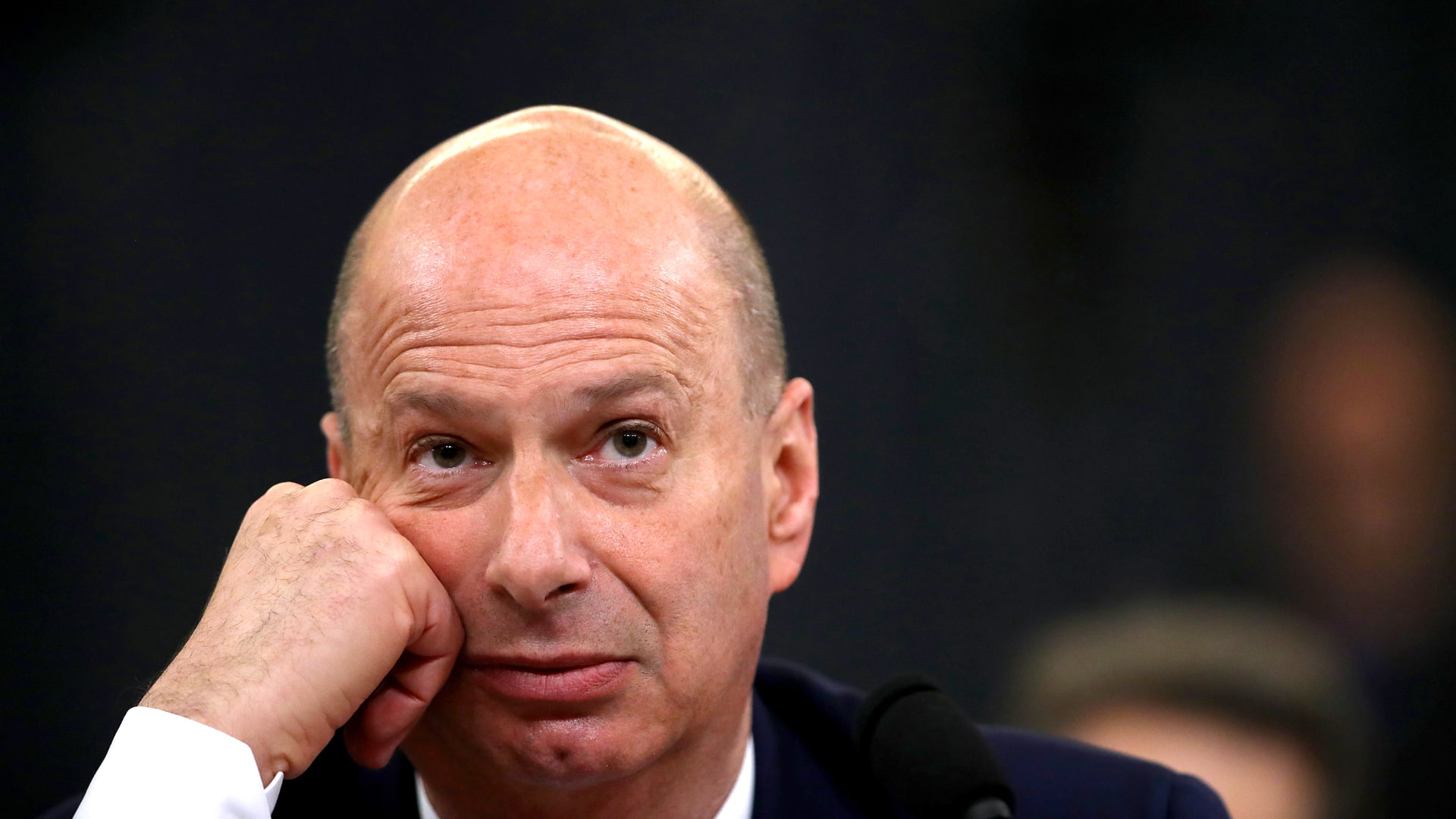 Impeachment Week 2: Who we've heard from and who else is still to speak