Trump, standing with Putin, sided with him over U.S. intel. Is this the dawn of 'America's surrender'?

In the face of a geopolitical menace in the form of Russia, critics warn that U.S. President Donald Trump's refusal to publicly denounce Russian leader Vladimir Putin for interference in the 2016 election heralds the beginning of an era of American 'surrender.'

Former U.S. diplomat fears 'the end of an era of American leadership in the world'

The last American media question for Donald Trump was, in a way, a lifeline.

As the U.S. president stood with Russia's Vladimir Putin after their one-on-one summit in Helsinki on Monday, the Associated Press's Jonathan Lemire rose to put a query to Trump.

"Just now, President Putin denied having anything to do with the election interference in 2016," he began. "Every U.S. intelligence agency has concluded that Russia did.

"My first question for you, sir, is who do you believe?" 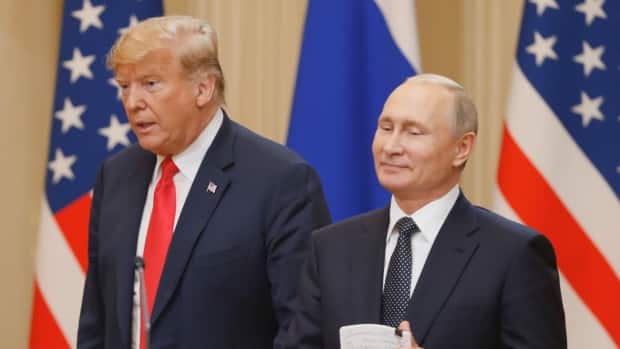 Trump's response in the press conference instead struck critics as a breathtaking statement of surrender. It was perceived as cementing a shift in the global order — one in which an era of American leadership has been replaced by one of American acquiescence.

What might have been a breezy affirmation by the U.S. president backing his own intelligence community devolved into a mini-tirade, with Trump fuming about Democratic presidential rival Hillary Clinton's emails and demanding the whereabouts of a purported "missing" Democratic National Committee server.

"My people came to me, Dan Coats came to me," Trump said, as he proceeded to undermine his own director of national intelligence. "They said they think it's Russia."

"I have President Putin — he just said it's not Russia. I will say this: I don't see any reason it would be."

For Brett Bruen, a former White House director of global engagement, watching Monday's news conference felt like witnessing "America's surrender" on the diplomatic stage to a tyrant bent on dividing the West.

"Today was really the ceremonial surrender of a role that the United States has played since the end of World War II — the end of an era of American leadership in the world."

He also noted with dismay Trump's lack of criticism regarding Russia's support of the regime of Syrian dictator Bashar al-Assad, as well as its annexation of Crimea, its interference in the U.S. democratic system and its suspected poisonings of an ex-Russian spy and his daughter on British soil.

"Asymmetric warfare has taken place … and the United States has not come to the defence of our allies, of our values, of ourselves," said Bruen, who worked for years to counter Russian propaganda in the Obama administration.

"That's why I use the terminology 'surrender.'"

In the face of a geopolitical menace in the form of Russia, he believes it appears the U.S. has chosen "to accept the notion that invading other countries, that meddling in the electoral process, that assassinating people with chemicals weapons on the streets of other countries, is an acceptable practice."

Bipartisan members of U.S. Congress used some of the same disparaging language to describe the Trump-Putin news conference, with Democratic congressman Adam Schiff blasting Trump's performance in a tweet as "the most damaging and shameful surrender of American values and interests in modern history."

President Trump just attacked our intelligence agencies and law enforcement for doing their jobs while standing next to a dictator who intervened in our election to help elect Trump.<br> <br>Putin will take this as a green light to interfere in 2018, and it is. Cowardly and shameful.

President Trump’s performance today was the most damaging and shameful surrender of American values and interests in modern history.<br><br>I say again to my Republican colleagues: Wake up.

In a statement, Republican senator John McCain called the summit in Helsinki a "tragic mistake."

Neil Cavuto of Fox Business calls Trump's press conference "disgusting", "That sets us back a lot." <a href="https://t.co/R2ZIjyFyPR">pic.twitter.com/R2ZIjyFyPR</a>

On Monday, Trump blamed the poor state of U.S.-Russian relations on American "foolishness" and special counsel Robert Mueller's probe into Russian election meddling, ignoring Moscow as the primary cause of tensions.

That tweet, along with Trump's behaviour at the news conference, intensified speculation that the Kremlin might have "kompromat" — or compromising material — on the president. In a combative interview with Fox News, host Chris Wallace pressed Putin about whether the Russians possessed dirt on Trump.

"We don't have anything on [Trump]," Putin insisted.

Still, Trump's reluctance to criticize Russia has been perplexing.

Most telling on Monday, according to Brookings Institution foreign-policy fellow Jamie Kirchick, was when Reuters reporter Jeff Mason offered another opportunity for Trump to denounce Russia over its aggression in Crimea, the U.K. and the U.S.

"Do you hold Russia at all accountable for anything in particular?" Mason asked.

To which Trump responded: "I hold both countries responsible. I think that the United States has been foolish. I think we've all been foolish."

Kirchick noted that actual U.S. policy on Russia was much less conciliatory than Trump's words.

"There's a gap between the rhetoric and the retweets, and the actual policies," he said.

For example, Trump last week dumped on the European Union as a "foe," but told reporters on Monday he considers Putin a "good competitor … and I think the word 'competitor' is a compliment."

"If you look at the NATO communiqué the president signed," Kirchick said, "it's a very strong document and it's largely at odds from the way he's behaved" in the past few days in Europe.

In March, the Trump administration also approved $47 million US worth of lethal arms to Ukraine so the country can defend itself against further Russian incursions — a move that the Obama administration held off on.

Whether the U.S. has truly forsaken its interests depends on how much stake one puts in Trump's remarks.

"Trump can say we've got to be friendly with Russia, but the fact is, even if he said we've got to accept the Crimean annexation, he can't lift sanctions on Russia," said Alexandra Vacroux, director of Harvard University's Davis Center for Russian and Eurasia Studies.

While some Russia scholars said it seemed the summit sidestepped a disastrous "grand bargain" that might have included sanctions relief or the reneging of U.S. commitments to NATO, it's unlikely the public will learn precisely what — if any — concessions were discussed, given that Trump and Putin met without advisers.

Win-win for the 2 leaders?

Vacroux said it seems both leaders got what they wanted out of the meeting.

For Trump, securing the sit-down was long on his agenda as part of a bid to smooth relations with Russia. For Putin, Vacroux said, "he got the prestige of being called one of the world's great superpowers."

"There was nothing to lose" for the Russian leader, Vacroux said, though the United States' strategic partners abroad may be less confident in the country's standing as a pillar of stability.

His conclusion? "We can no longer completely rely on the White House." 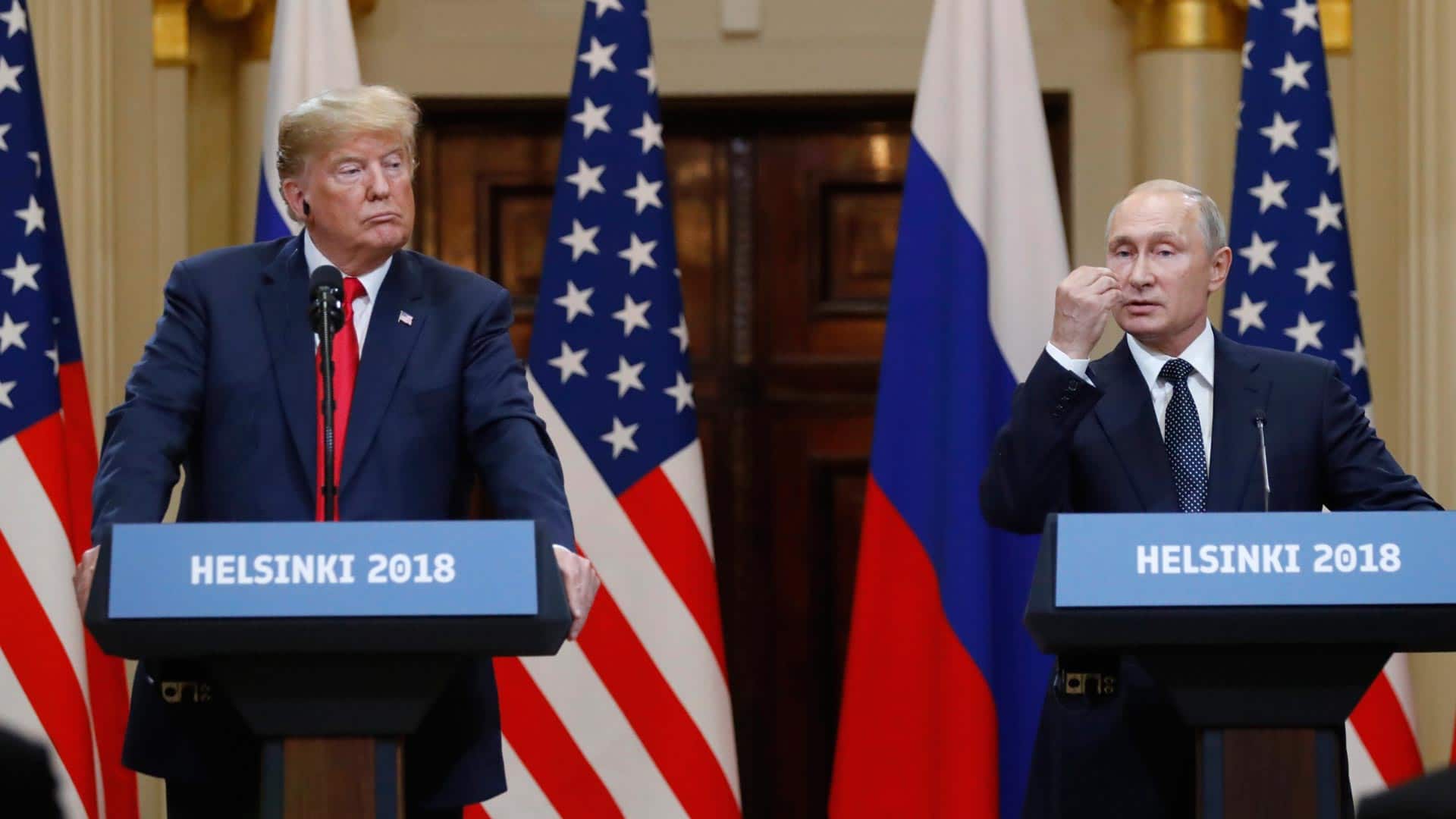